A band of heavy rain intensified and focused in parts of central and eastern North Carolina overnight Monday into early Tuesday, after triggering major flooding in downtown Charleston, South Carolina.

745am: Flash Flooding Update. Dangerous conditions in the Triangle this morning. Rain to continue through midday. pic.twitter.com/IuN0jjAOVn

One of the hardest hit areas was Crabtree Creek, north of downtown Raleigh, which rose over 5.18 m (17 feet) since Monday morning, causing flood waters to enter businesses and homes. 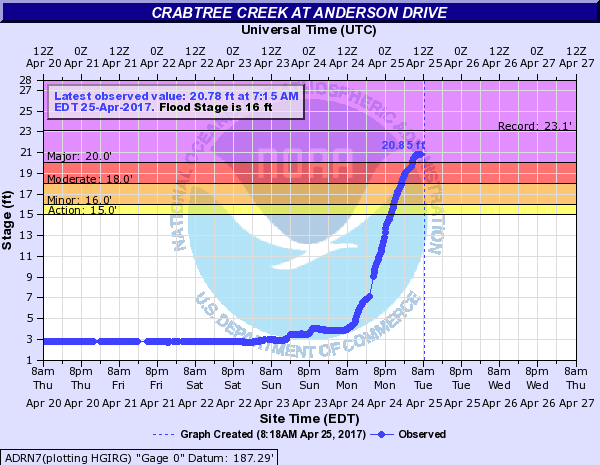 According to The Weather Channel, flood waters were expected to cover all parking lots at Crabtree Valley Mall, and homes were expected to be flooded along the creek at Anderson Drive. The National Weather Service issued a rare flash flood emergency for Wake County, warning of an "awful" morning commute due to numerous flooded roads.

In Wake County, stretches of Atlantic Avenue, Avent Ferry Road, Highway 42, Capital Boulevard, Wycliff Road, Six Forks Road, and Blue Ridge Road were closed due to flooding. In the city of Wilson, numerous roads were closed, with several cars stalled along Ward Boulevard. One home was flooded on Starship Lane. In Johnston County, southeast of Raleigh, numerous secondary roads were flooded and a water rescue needed on Old Johnson Road.

The low pressure area responsible for the flooding will move northward to just south of Long Island New York by Wednesday, the National Weather Service said.