In the most comprehensive reconstruction of rainfall patterns within the Intertropical Convergence Zone for the past 2000 years, a team of researchers led by ETH Zurich describe how even small changes in global temperature can trigger a migration of the tropical rain belt and destabilize Earth's climate system.

The tropical rain belt, also known as the Intertropical Convergence Zone (ITCZ), is in a state of constant migration. It continuously changes position in response to the seasons and follows the Sun’s zenith, with a slight delay. This, in turn, determines the wet and dry periods in the tropics and subtropics over the course of the year. The tropical rain belt therefore effectively controls the climate in most of the tropical and subtropical regions, such as the monsoon season in Southeast Asia and Central America.

An international team of researchers led by Franziska Lechleitner from the Geological Institute at ETH Zurich has proven for the first time that the migration of the tropical rain belt is quite sensitive to even small changes in global temperatures. The team’s findings have been published in the journal Scientific Reports, where they present the most comprehensive reconstruction of rainfall patterns within the Intertropical Convergence Zone for the past 2000 years.

In the past, scientists have only studied the migration of the tropical rain belt over very long time spans, such as glacial and interglacial cycles over tens of thousands of years, with correspondingly sizeable temperature differences of several degrees. “So far, however, scientists have not investigated the past two millennia on a global scale, when temperature changes have been far less pronounced,” explains the climate geologist.

The ETH researcher and her colleagues have now managed to demonstrate how the tropical weather system shifted a good way south between 1450 and 1850, a period known as the Little Ice Age. “This migration is linked to the lower global temperatures during this time,” explains Lechleitner.

The latest climate reconstructions show that the average temperatures during this period were around 0.4 °C (0.7 °F) lower than before and after the Little Ice Age. The migration of the tropical rain belt also caused substantial changes in the tropical and subtropical climate during this time, affecting the areas of drought and heavy rainfall.

The scientists also found that the climates in the tropical rain belt and the mid-latitudes are interconnected through the North Atlantic Oscillation (NAO). This phenomenon dictates the weather in western and central Europe, and is the result of fluctuations in the difference of atmospheric pressure at sea level between the Icelandic low and the Azores high over the North Atlantic. The NAO is a numeric index: if it is positive, both the Icelandic low and the Azores high are very strong, which generally causes wet weather and strong westerly winds in central Europe, or in extreme cases winter storms and hurricanes, such as the violent Lothar storm in 1999.

However, the NAO index is negative when both the Icelandic low and Azores high are only weak. The west winds die down and shift sideways. This creates damper weather conditions in the Mediterranean region. Central Europe, on the other hand, is more prone to cold air masses sweeping in from the northeast, which can cause icy winters and dry springs. 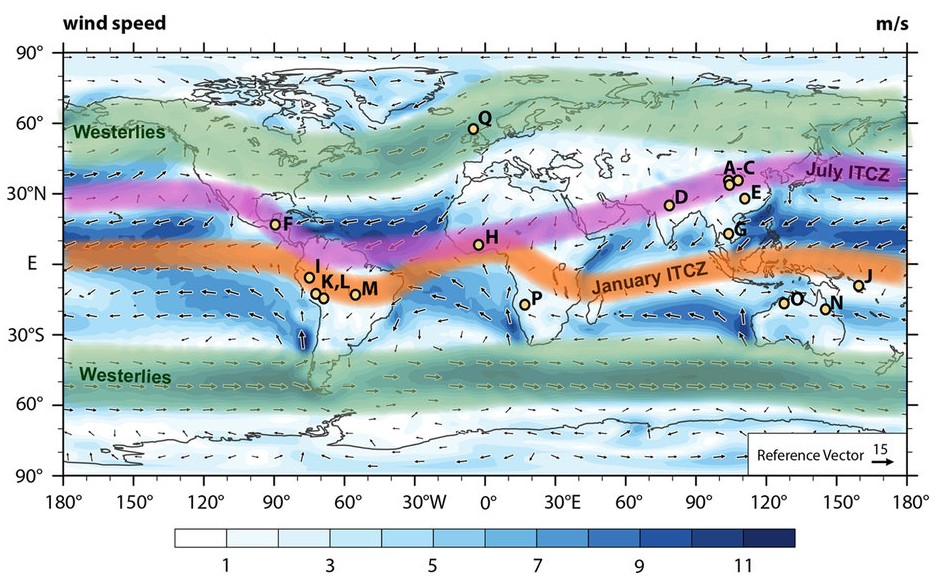 Stalagmites as useful barometers of precipitation

For their precisely dated, high-resolution analysis of tropical rainfall over the past two millennia, the researchers compared published climate reconstructions produced with the help of stalagmite, ice core, sea sediment and tree ring records. In the case of stalagmites, other scientists examined aspects such as the oxygen-isotope ratio, which serves as a barometer for rainfall volume in the tropics.

“Our research shows that the global temperature changes do not have to be very extreme in order to shift the position of the tropical rain belt,” says Lechleitner. It is thus quite possible that manmade climate change and the temperature rise that has already occurred, although comparatively small, are potentially enough to trigger a migration of the tropical rain belt.

If only global temperatures were to rise, this weather system would probably shift to the north, as the northern hemisphere is warmer than the southern hemisphere, due to various factors.

“Exactly where the rain belt migrates to, however, also depends on particulates in the atmosphere,” explains Lechleitner. In an earlier study, the research team was able to show that the tropical rain belt has migrated south since the start of industrialisation, as aerosols from industrial combustion processes and waste gases have caused a cooling of the northern hemisphere. As a result, the zones with the highest average annual temperatures have also shifted south.

“The tighter regulations intended to reduce airborne particulates and sulphur could encourage the tropical rain belt to migrate in a northerly direction again,” says the researcher. This could possibly make the Sahel region less arid, turning the NAO index positive and resulting in heavy rainfall and stormier weather in central Europe.

In the tropics and subtropics, even tiny shifts in the position of the rain belt can trigger more frequent droughts or heavy rainfall. There may also be a shift or a shortening of the rainy and dry seasons. This can have fatal consequences for the local population dependent on agriculture, as seen in the prolonged period of drought that affected the Sahel region from 1970 to 1990, for example. “We can now trace this drought back to the southern migration of the tropical rain belt during this period,” the researcher concludes.