Four areas in the Atlantic Ocean showing signs of potential tropical development and three of those systems now have a “medium chance” of soon growing into a tropical cyclone. One of those areas is a low pressure system centered more than 1,100 miles east of the northern Leeward Islands. It was moving toward the west-northwest at nearly 20 miles per hour. Forecasters said the system had begun to show some organization and that environmental conditions were becoming “conducive for development.” 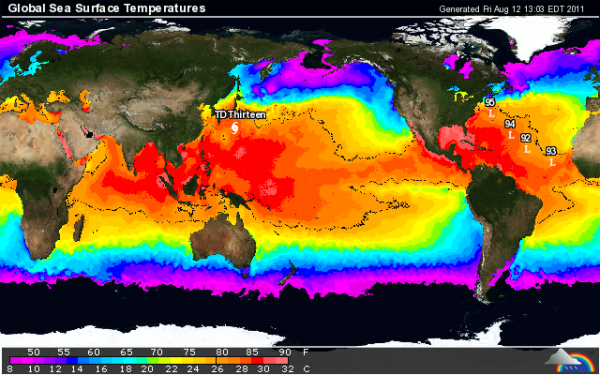 Another broad low pressure system near the Cape Verde Islands was moving westward at 15 to 20 miles per hour and was also given a medium chance — 40 percent — of developing into a cyclone in the next two days. A third area of concern is located 160 miles west-northwest of Bermuda — well to the east of North Carolina. Though the system was given a 30 percent chance of development, it’s trajectory — to the northeast — posed little threat to any populated region.

The final system under scrutiny is located 700 miles northeast of the northern Leeward Islands. This less-developed system has a 20 percent chance of becoming a tropical cyclone in the next 48 hours. It was moving to the west-southwest at 10 miles per hour. Forecasters have projected an above average Atlantic storm season this year. Historically, the end of August and beginning of September are the most active weeks for storm development.