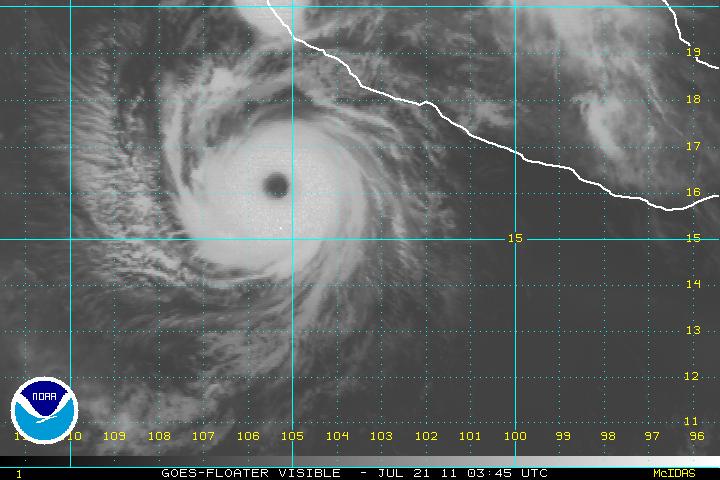 Dora, expected to strengthen to a major hurricane, will impact parts of western Mexico over the next few days with heavy surf and locally strong, gusty winds. Churning about 250 miles southwest of Acapulco over the eastern Pacific, Dora will continue to strengthen, potentially reaching Category 3 status, with sustained winds of around 125 mph, by early Thursday.

No major damage is foreseen on the Mexican mainlands, as the worst of the storm, its strongest winds and heaviest rain, will remain well offshore over the next few days. Even so, the Mexican coastline has already been feeling some effects from the hurricane. Outer rain bands have reached onshore in Guerrero state, near Acapulco, but with rather little rain. Dangerous surf and swells are likely to continue along the coast for the next several days, even building further, increasing the threat of rip currents.

The coastline from near Lazaro Cardenas to Puerto Vallarta, in the states of Michoacan, Colima and Jalisco, could experience tropical storm-force winds of at least 40 mph as Dora passes by later today and into Thursday. This would includes also include bursts of heavy rain. A significant threat will arise later in the week as Dora tracks farther to the north and west, nearing Cabo San Lucas and the southern tip of Baja California.

There is a chance that this area could experience more significant wind and rain from Dora. The extent and severity of the effects would ultimately depend on the track and intensity of the hurricane as it approaches Friday night and early Saturday.

After reaching major hurricane status, or at least Category 3 on the Saffir-Simpson Scale, Dora is expected to weaken a bit as it nears Baja California due to cooler ocean waters in its path. Certainly, it would behoove anyone with interests along southwestern, and especially southern Baja California, coasts of Mexico to keep a close eye on Dora. (AccuWeather)