November 2019 saw a bit of everything for the USA, according to NOAA's monthly climate report on December 9, 2019– cooler and drier weather in the Midwest and Northeast, and warmer and wetter in the West and Southwest. There were notable climate events reported, including Alaska experiencing their warmest November this year.

The average November temperature across the country was 5.1 °C (41.2 °F) and ranked in the middle third of the 125-year record.

The average precipitation, on the other hand, was 47.2 mm (1.9 inches), ranking in the driest third of the November record.

Above-average precipitation fell across the Southwest, parts of the Rockies and Great Plains, as Arizona had its third-wettest November on record.

Below-average precipitation was seen across the Pacific Northwest, the deep South, and parts of the Central Plains, Great Lakes, and Mid-Atlantic.

Relatively, it was a wet and warm meteorological autumn season which spanned September through November.

The total autumn precipitation was 189 mm (7.5 inches), ranking in the upper third of the historical record.

The average autumn temperature was 12.2 °C (53.9 °F), ranking the middle third of the historical record for the season.

As the country continues its wettest year to date– from January through November– the wet autumn extended 2019's soggy stretch, with a precipitation total of 816 mm (32 inches). 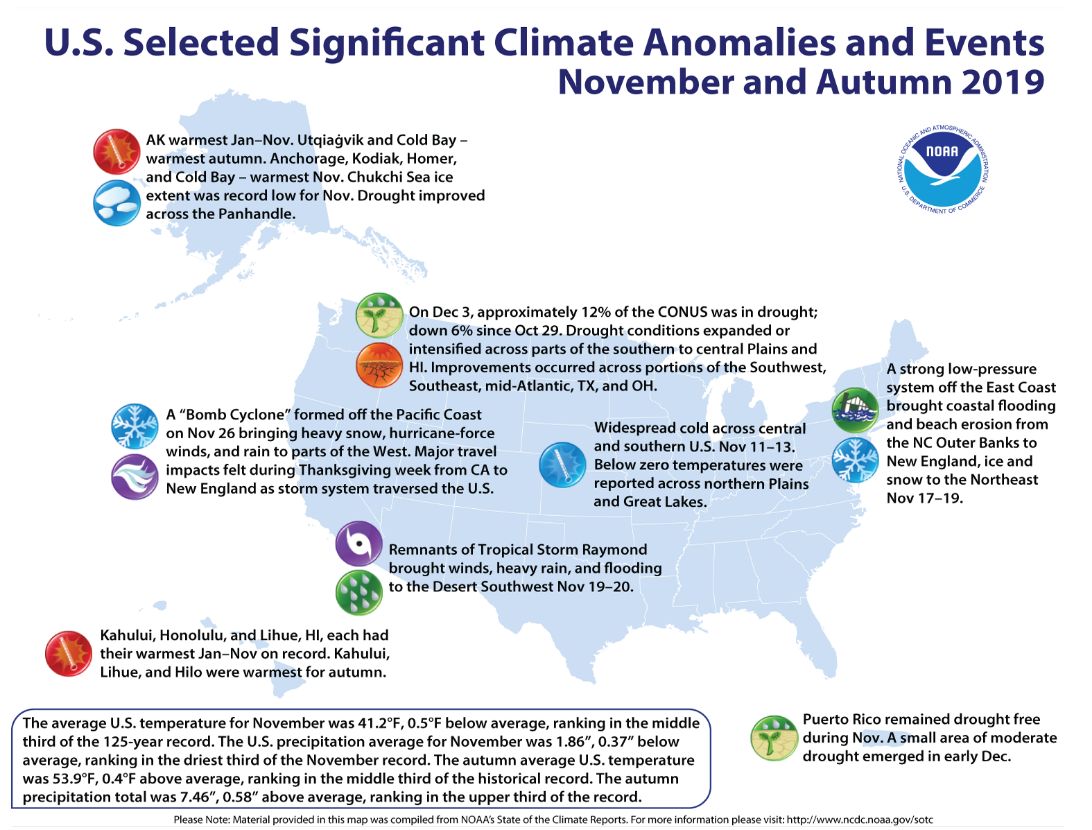 November was a hot month, season, and year for Alaska as  Anchorage, Kodiak, Homer, and Cold Bay experienced the warmest November on record.

Alaska as a whole had its fourth warmest autumn.

Another notable record was brought by Tropical Storm "Raymond" in the eastern Pacific Ocean, which helped set new rainfall records across southeastern Arizona.

Meanwhile, drought continued to improve by the end of November as around 12% of the contiguous US experienced drought, down 6% from the end of last month.

Our November U.S. Climate Report includes county-level information about temperature and precipitation. Check out your state and county in maps and rankings: https://t.co/CKmcJDIzC1 https://t.co/92VUjSV8PL #StateofClimate pic.twitter.com/ZIlfiXAlc0