The ESA/NASA Solar Orbiter spacecraft has captured the largest solar prominence eruption ever observed in a single image together with the full solar disc.

This latest event took place on February 15, 20221 on the far side of the Sun and extended millions of kilometers into space.

There is no signature of the eruption on the solar disc facing the spacecraft – which is currently approaching the Earth-Sun line – meaning that it must have originated from the side of the Sun facing away from us, ESA said in a press release.2

The imagery was captured by the ‘Full Sun Imager’ (FSI) of the Extreme Ultraviolet Imager (EUI) on Solar Orbiter. 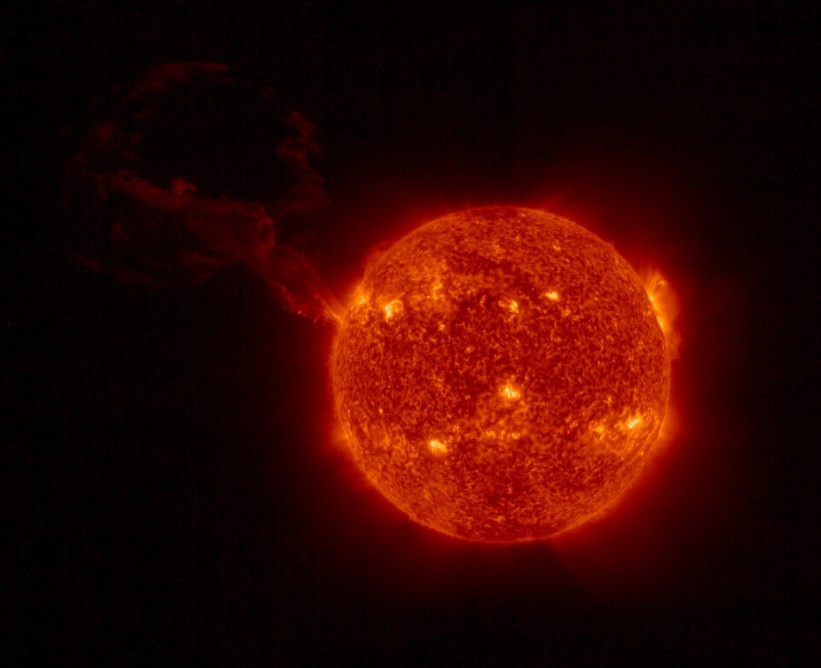 FSI is designed to look at the full solar disc even during close passages of the Sun, such as during the upcoming perihelion passage next month.

At closest approach on March 26, which will see the spacecraft pass within about 0.3 times the Sun-Earth distance, the Sun will fill a much larger portion of the telescope’s field of view.

Composition of imagery from the ESA/NASA Solar Orbiter and SOHO spacecraft, which captured a giant solar eruption on February 15, 2022.

Right now, there is still a lot of ‘viewing margin’ around the disc, enabling stunning detail to be captured by FSI out to about 3.5 million km (2.2 million miles), equivalent to five times the radius of the Sun.

Other space telescopes such as the ESA/NASA SOHO satellite frequently see solar activity like this, but either closer to the Sun, or further out by means of an occulter, which blocks out the glare of the Sun’s disc to enable detailed imagery of the corona itself.

Thus, the prominence observed by Solar Orbiter is the largest ever event of its kind to be captured in a single field of view together with the solar disc, opening up new possibilities to see how events like these connect to the solar disc for the first time.

At the same time, SOHO can provide complimentary views to even larger distances.