ESA's Solar Orbiter spacecraft passed through the ion tail of Comet C/2019 Y4 (ATLAS) on May 31 and June 1, 2020, and through its dust tail on June 6. This is the 7th space mission to fly through the tail of a comet, and the first one whose upcoming crossing was predicted in advance.

Solar Orbiter was launched in February 2020 on a mission to capture the first images of the Sun's poles. It was not due to be taking science data at the time of its crossing through the tail, but mission experts adjusted its testing schedule and turned on four most relevant instruments for the unique encounter.

We are still waiting for the results but for the time being, we have NASA's STEREO-A spacecraft imagery of the encounter.

In the animated image, ATLAS emerges from the top of the frame and approaches the Sun — off camera to left — against gusts of solar wind. Its dust tail, which reflects sunlight, appears white.

Mercury is also visible as a bright dot emerging from the left against the stationary starfield. The vertical streaks in the image are artifacts created by saturation from bright background stars.

The spacecraft passed through ATLAS' dust tail on June 6. ESA engineers announced the possibility of one or more tiny dust grains hitting the spacecraft at speeds of tens of kilometers per second. While there is no significant risk to the spacecraft from this, the dust grains themselves would be vaporized on impact, forming tiny clouds of electrically charged gas, or plasma, which could be detected by the Radio and Plasma Waves (RPW) instrument.

Solar Orbiter is equipped with a suite of 10 in-situ and remote-sensing instruments to investigate the Sun and the flow of charged particles it releases into space – the solar wind. 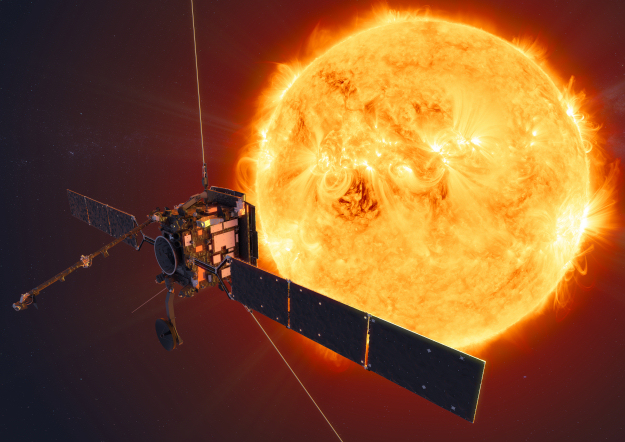 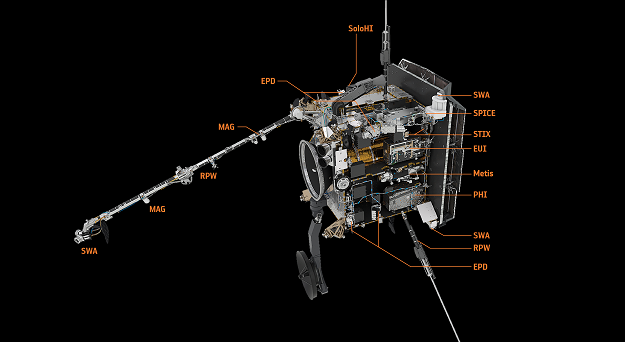 Labeled diagram showing a cutaway of Solar Orbiter's suite of ten science instruments that will study the Sun. There are two types: in situ and remote sensing. The in situ instruments measure the conditions around the spacecraft itself. The remote-sensing instruments measure what is happening at large distances away. Together, both sets of data can be used to piece together a more complete picture of what is happening in the Sun's corona and the solar wind. Image credit: ESA/ATG medialab

Fortuitously, the four in-situ instruments ESA turned on for the encounter are perfect for detecting the comet's tails because they measure the conditions around the spacecraft, and so they could return data about the dust grains and the electrically charged particles given off by the comet.

These emissions create the comet's two tails: the dust tail that is left behind in the comet's orbit and the ion tail that points straight away from the Sun.

Solar Orbiter is currently circling our parent star between the orbits of Venus and Mercury, with its first perihelion to take place on June 15, around 77 million km (48 miles) from the Sun. In the coming years, it will get much closer, within the orbit of Mercury, around 42 million km (26 miles) from the solar surface.