The center of Tropical Storm "Cristobal" will move northward over the central Gulf of Mexico today and tonight (LT), and will be near the northern Gulf of Mexico coast on Sunday, June 7, 2020.  Its center is forecast to move inland across Louisiana late Sunday through Monday morning (LT), and northward across Arkansas and Missouri Monday afternoon into Tuesday, June 9.

Cristobal's satellite presentation continues to lack the appearance of a classic tropical cyclone, with a large curved band over the northern semicircle and little deep convection near the center, NWS forecasters noted at 15:00 UTC today.

Based on the poorly-organized state of the system, some dry air entrainment, and interaction with an upper-level low, only some slow strengthening is forecast. 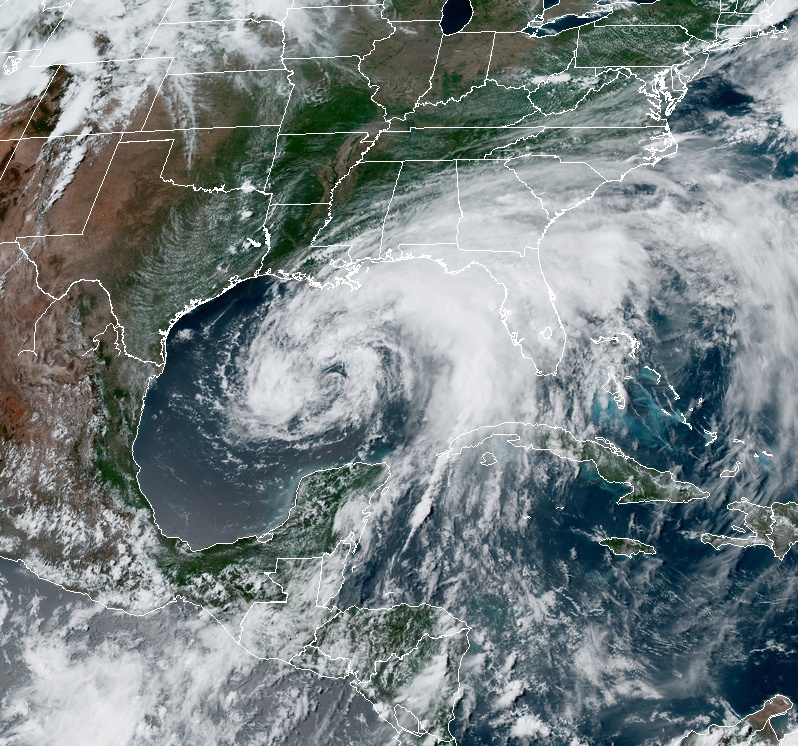 Cristobal should continue northward through a weakness in the subtropical ridge until tomorrow evening, bringing the center to the northern Gulf coast in about 36 hours — 22:00 CDT on June 7, which is 03:00 UTC, June 8. Later, a turn to the north-northwest, and then back to the north is forecast as the cyclone moves between a mid-level ridge and a trough approaching the central United States.

In 3 – 4 days, the post-tropical system should accelerate north-northeastward on the east side of the trough and move into Canada. Cristobal is likely to remain a broad and asymmetric storm when it makes landfall on June 7 (LT). Therefore, users are urged to not focus on the exact forecast path as the associated winds, storm surge, and rainfall will extend well to the east of the center. 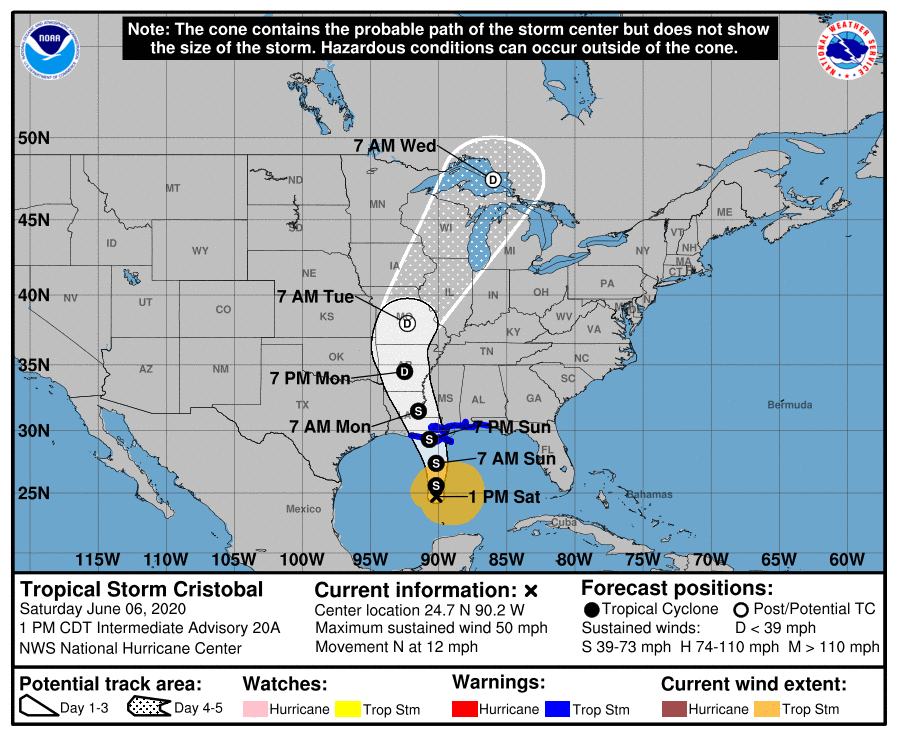 The storm is moving toward the north near 19 km/h (12 mph), and this general motion is expected to continue for the next day or so, followed by a gradual turn toward the NNW.

On the forecast track, its center will move northward over the central Gulf of Mexico today and tonight, and will be near the northern Gulf of Mexico coast on Sunday.  Cristobal's center is then forecast to move inland across Louisiana late Sunday through Monday morning, and northward across Arkansas and Missouri Monday afternoon into Tuesday.

The deepest water will occur along the immediate coast in areas of onshore winds and will likely extend along the coast well to the east of the center. 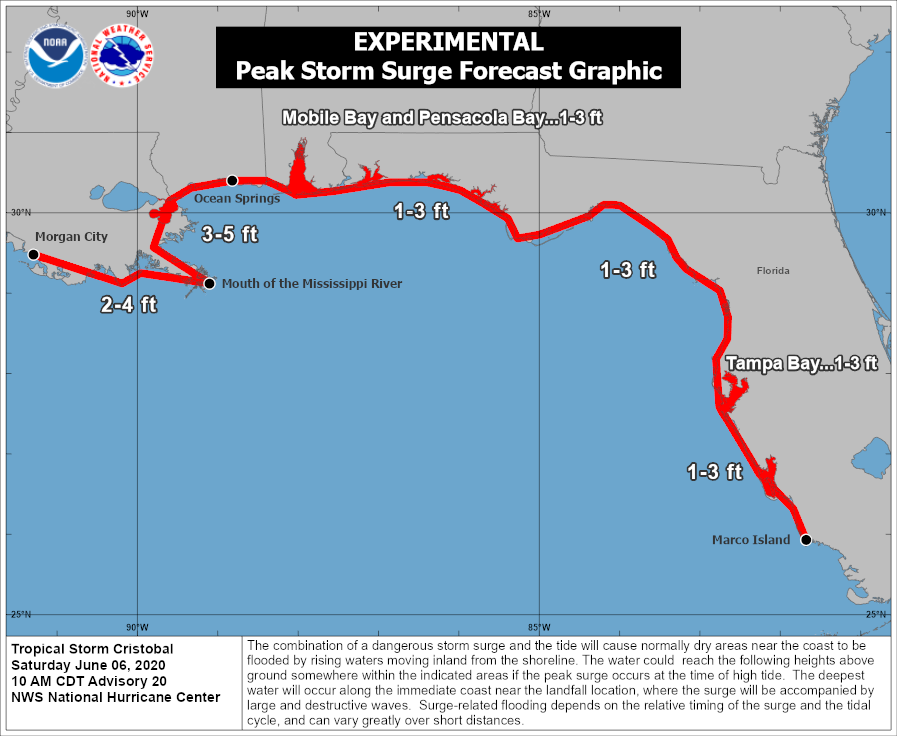 Cristobal is expected to produce total rainfall accumulations of 100 – 200 mm (4 to 8 inches) across the eastern and central Gulf Coast into the Lower Mississippi Valley, with isolated amounts to 305 mm (12 inches).

Additional rainfall totals of 25 to 74 mm (1 to 3 inches) are expected across the Mexican states of Quintana Roo and Yucatan, bringing isolated storm totals to 635 mm (25 inches). This will continue the threat of life-threatening flash floods and mudslides.

Swells generated by Cristobal will affect portions of the northern and eastern Gulf coast during the next few days. These swells are likely to cause life-threatening surf and rip current conditions.

Cristobal formed from the remnants of Tropical Storm "Amanda" — the second tropical cyclone and first named storm of the 2020 Pacific hurricane season — which killed at least 33 people and affected more than 500 000 in parts of Central America following its landfall in Guatemala on May 30, 2020. Amanda rapidly weakened after making landfall but its remnants emerged in the Gulf of Mexico and regenerated into Tropical Depression Three and then into Tropical Storm "Cristobal" on June 2.

Amanda caused flooding and landslides that affected hundreds of thousands across El Salvador, Guatemala, and Honduras.

Two of the fatalities occurred in Guatemala, where nearly 1 500 shelters have been opened for those affected.

In El Salvador, torrential rainfall caused major damage along the coastal cities as rivers became swollen, sweeping away buildings. 27 deaths were reported in the country, six of which died due to flash flooding and one from a collapsed home.

More than 900 houses were damaged across the nation, and 1 200 families were evacuated to 52 shelters across La Libertad, San Salvador, Sonsonate, and San Vicente.

In the capital city of San Salvador, 50 houses were destroyed and 23 vehicles fell into a sinkhole.

The UN Office for the Coordination of Humanitarian Affairs said on June 5 that there are about 150 000 affected people in El Salvador, 306 000 in Guatemala, and 1 200 in Honduras, where four deaths were also reported.

At 13:35 UTC on June 3, reports from an Air Force Reserve Unit Hurricane Hunter aircraft indicated that Cristobal had made landfall near Atasta, Mexico, just to the west of Ciudad del Carmen, with sustained winds of 95 km/h (60 mph).

Cristobal began to slowly weaken as the day went on while it pushed further southeast into the Mexican state of Campeche, signified by a decrease in thunderstorm activity near the center.

On June 4, it weakened into a tropical depression, with its satellite appearance degrading. The depression lost most of its banding features due to prolonged interaction with land, and most of its convection was limited to the northeastern quadrant.

Unexpectedly, the depression moved northward at a faster pace than forecast, resulting in it getting better organized on satellite imagery. Cristobal briefly entered Guatemala before starting to move northwards.

As it continued its northward motion, convection increased in the northern side of the system and it was re-upgraded to a tropical storm at 15:00 UTC on June 5.

Cristobal gradually intensified but lost its core tropical structure due to dry air and moderate wind shear, resulting in it having an asymmetric structure on satellite resembling that of a subtropical cyclone.