Tropical Storm "Iota" formed in the Central Caribbean at 21:00 UTC on November 13, 2020, as the 30th named storm of the 2020 Atlantic hurricane season. It rapidly strengthened into a Category 4 hurricane on November 16 and is now threatening Central America — ravaged by Category 4 Hurricane "Eta" earlier this month — with potentially catastrophic winds, life-threatening storm surge, and extreme rainfall. 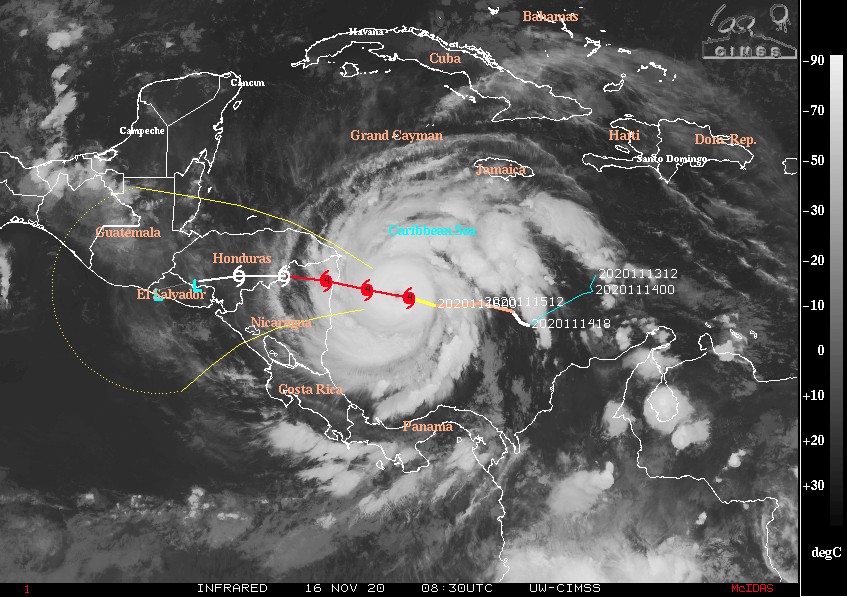 A Hurricane Watch is in effect for San Andres.

A Tropical Storm Warning is in effect for San Andres, the coast of Nicaragua from south of Sandy Bay Sirpi to Bluefields, and the northern coast of Honduras from west of Punta Patuca to Punta Castilla.

On the forecast track, the core of Hurricane "Iota" will pass near or over Providencia island during the next few hours and make landfall within the hurricane warning area in northeastern Nicaragua and eastern Honduras tonight (EST).

A westward to WNW motion is forecast through landfall. 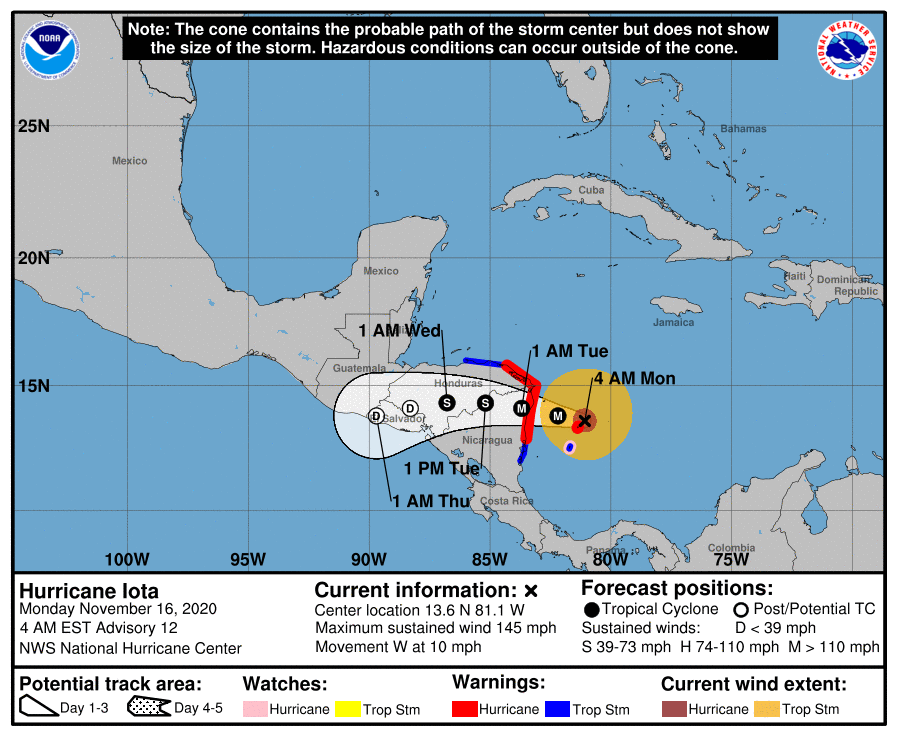 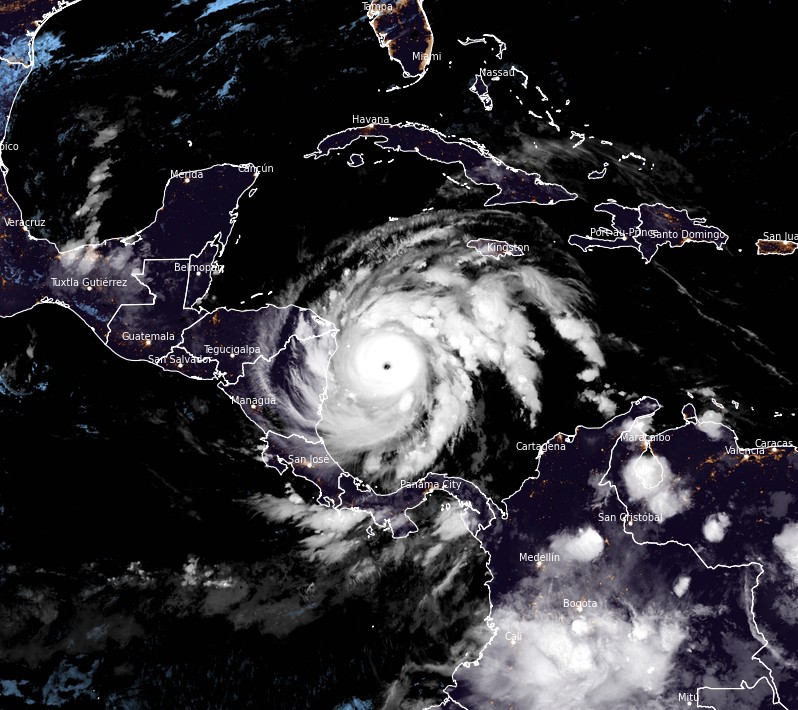 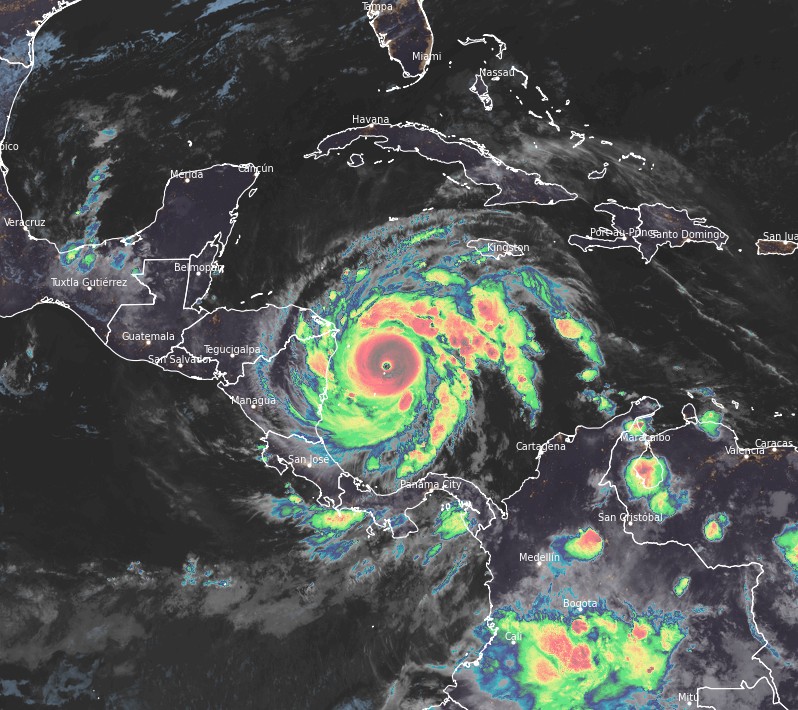 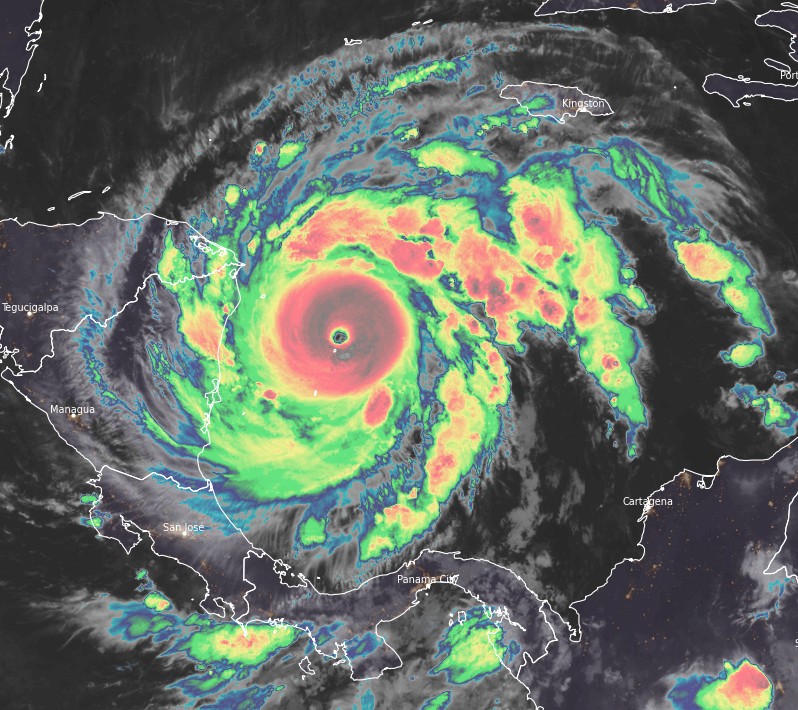 "Iota has explosively deepened 26 hPa during the past 6 hours and has rapidly intensified an incredible 35 knots (65 km/h / 40 mph) during that same time," NHC forecaster Stewart noted at 09:00 UTC today.

Furthermore, the pressure fell an amazing 10 hPa from 945 hPa down to 935 hPa in a little over an hour between those two fixes. The crew also encountered intense lightning and hail in the southwestern quadrant, where recent remote data indicate that frequent lightning is still occurring.

The aircrew reported that the eye was around 28 km (17 miles) wide, and the latest GOES-16 hi-resolution infrared satellite imagery confirms that the eye diameter, and that the eye has cleared out with continued warming eye temperatures and cooling surrounding cloud tops.

"The combination of these factors plus the relatively small radius of maximum winds (RMW) of about 18 km (11 miles), argues for continued rapid strengthening right up until landfall occurs, and Iota could be near Category 5 strength at that time."

"After landfall, rapid weakening is expected over the rugged terrain of Nicaragua and Honduras. Iota is forecast to become a tropical storm by 36 hours, and degenerate into a post-tropical remnant low by 60 hours, if not sooner."

Honduras, northern Nicaragua, Guatemala, southern Belize can expect 200 to 400 mm (8 to 16 inches), according to the NHC. Isolated maximum totals of 500 to 750 mm (20 – 30 inches) will be possible, especially from northeast Nicaragua into northern Honduras.

Costa Rica and Panama can expect 100 to 200 mm (4 to 8 inches), with isolated maximum totals of 300 mm (12 inches). This rainfall will lead to significant, life-threatening flash flooding and river flooding, along with mudslides in areas of higher terrain.

Tropical storm conditions are expected in the Tropical Storm Warning area in Nicaragua by late afternoon and in the warning area in Honduras by tonight.

A life-threatening storm surge will raise water levels by as much as 3 to 4.6 m (10 to 15 feet) above normal tide levels in areas of onshore winds along the coast of Nicaragua and Honduras. Near the coast, the surge will be accompanied by large and destructive waves.

Swells generated by Iota will affect much of the coast of Central America, the Yucatan Peninsula, Jamaica, and Colombia during the next couple of days. These swells are likely to cause life-threatening surf and rip current conditions.

"Iota is only the second Atlantic hurricane to reach Category 4 intensity this late in the calendar year on record." The other is Lenny in 1999.

"For the first time on record, the Atlantic has had two major hurricane formations in November — Eta and Iota."

Iota is also the 5th Caribbean named storm formation since October 1, along with Gamma, Delta, Zeta, and Eta.

"The 2020 Atlantic hurricane season is now tied with 2005 for the most Caribbean named storm formations after October 1 on record," Klotzbach said.