Extremely dangerous Category 4 Hurricane "Iota" made landfall along the coast of northeastern Nicaragua on November 17 — just 24 km (15 miles) from the area struck by Category 4 Hurricane "Eta" on November 3 — with maximum sustained winds of 250 km/h (155 mph), just 2 km/h below Category 5 hurricane. With many parts of Nicaragua and Honduras still recovering from massive rain dropped by Eta, more extreme rainfall produced by Iota may lead to some of the worst floods the region has seen in a thousand years or more.

Iota strengthened into a Category 5 hurricane with maximum sustained winds of 260 km/h (160 mph) — the strongest of the 2020 Atlantic season — before it made landfall, and now ranks as the second-most intense November hurricane in the Atlantic ocean on record.

Iota explosively intensified before landfall, 61 hPa in 24 hours (71 hPa in 36 hours) — which is far beyond the rapid deepening threshold. There are only 3 Atlantic hurricanes on record that have deepened more than 61 hPa in 24 hours — Gilbert in 1988, and Rita and Vilma in 2005. Iota is the only one in November. This rapid intensification rate makes Iota the 4th rapidly deepening hurricane of the 2020 season — which is the most in a single Atlantic season, and the largest deepening this year.

Iota is now the strongest November hurricane on record to make landfall in Nicaragua, surpassing the previous record set by Eta (230 km/h / 140 mph) just 13 days ago. Together with Eta, Hurricane "Iota" is now among the top 5 tropical cyclones ever to hit Nicaragua.

"Catastrophic flooding is anticipated because the ground is still saturated from Eta, and rain from Iota will run off into already swollen and flooded streams and rivers," AccuWeather CEO and Founder Dr. Joel N. Myers said. "The mountainous terrain will add to the dangers of flooding and mudslides."

"This may be one of the worst floods in some of these areas in a thousand years or more," Myers said. "Some of these countries may not completely recover for 5 to 10 years."

Myers compared Iota's looming impact to what Hurricane "Katrina" did to the U.S. Gulf Coast in 2005. 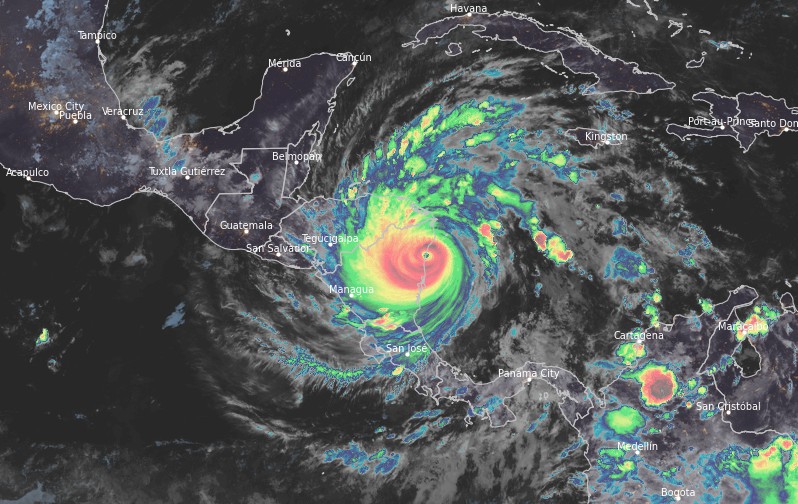 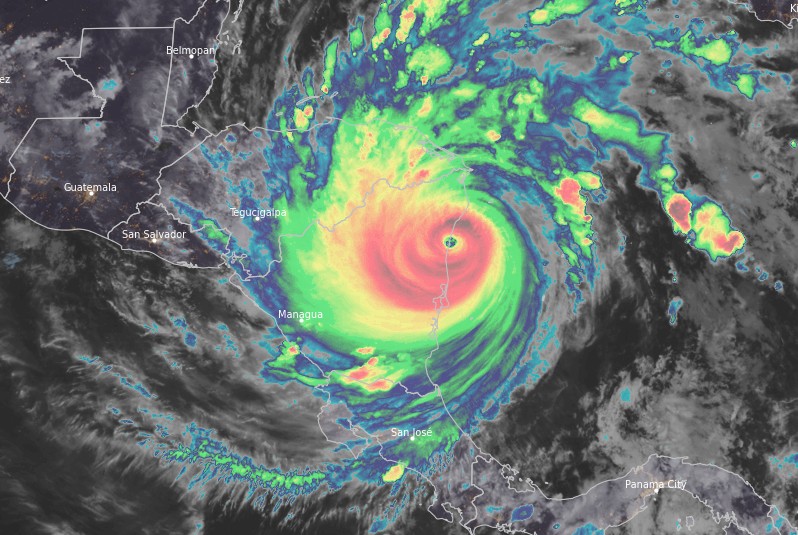 "Due to the previous damage caused by Eta, wind reports have been extremely limited," NHC forecaster Stewart said.

"There was an amateur radio report from Club de Radio-Experimentadores de Nicaragua of 200 km/h (124 mph), winds and roofs damaged in the town of Wilbi, Nicaragua. However, it is uncertain if these were sustained winds or wind gusts. At the Puerto Cabezas, Nicaragua, airport at 02:53 UTC measured a sustained wind of 134 km/h (83 mph) and a gust to 182 km/h (113 mph)."

The storm is moving toward the west near 15 km/h (9 mph) and this general motion is expected to continue during the next day or so. Iota will move farther inland across northern Nicaragua this morning (EST) and move across southern Honduras Tuesday night. 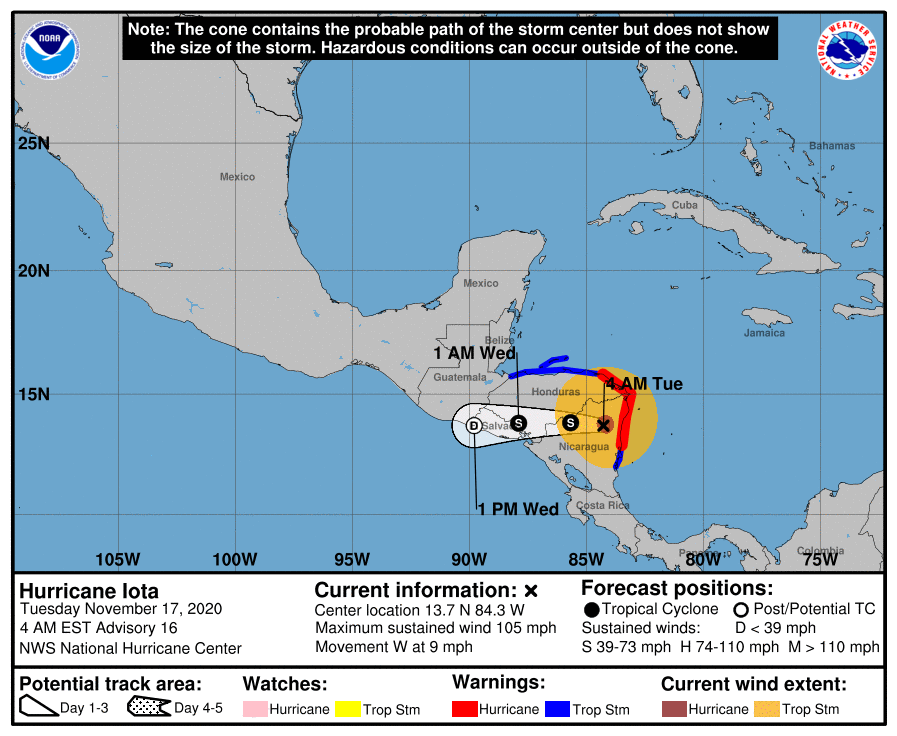 A life-threatening storm surge will raise water levels by as much as 3 to 4.5 m (10 to 15 feet) above normal tide levels in areas of onshore winds along the coast of Nicaragua and Honduras, NHC warns.

Near the coast, the surge will be accompanied by large and destructive waves.

Catastrophic wind damage is occurring near Iota's eyewall and these winds will spread farther inland across northern Nicaragua during the next several hours.

Iota is expected to produce the following rainfall accumulations through Thursday:

El Salvador and Panama: 150 to 250 mm (6 to 10 inches), with isolated maximum totals of 380 mm (15 inches). This rainfall would lead to significant, life-threatening flash flooding and river flooding, along with mudslides in areas of higher terrain.

Southern Nicaragua and Costa Rica: 75 to 125 mm (3 to 5 inches), with isolated maximum totals of 250 mm (10 inches). This rainfall would lead to significant, life-threatening flash flooding and river flooding, along with mudslides in areas of higher terrain.

Swells generated by Iota will affect much of the coast of Central America and the Yucatan Peninsula during the next couple of days. These swells are likely to cause life-threatening surf and rip current conditions.