A week after a multi-day severe weather outbreak, another severe event appears likely across the Southern U.S. through Thursday, March 25, 2021. A moderate risk of severe thunderstorms is in effect for Thursday across parts of the South, including the Memphis, Birmingham, and Jackson, Mississippi metro areas. These thunderstorms will contain strong tornadoes, large hail, and damaging winds, NWS warns.

"An active and dangerous day of weather is set to unfold across the Mid-South today, highlighted by a High Risk of severe weather issued by the Storm Prediction Center," NWS forecaster Mullinax said.

The primary weather driver of this impending tornado outbreak is a strengthening area of low pressure out ahead of a sharp and intense upper-level trough tracking into the middle Mississippi Valley and Ohio Valley this evening. 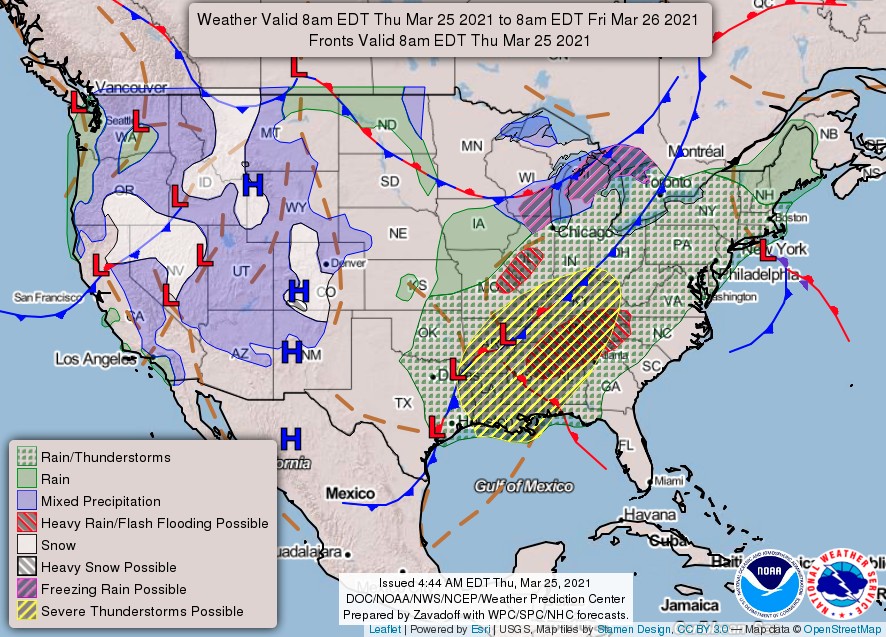 Powerful thunderstorms are forecast to blossom in the South this afternoon and track into the Ohio and Tennessee Valleys tonight. These intense thunderstorms are may contain a myriad of hazards that include violent long-track tornadoes, damaging wind gusts, and large hail.

In addition to the severe threats, hydrologic hazards are also a serious concern from northern Alabama and Mississippi to the Tennessee Valley and the southern Appalachians.

Torrential rainfall rates in these areas that also contain overly-saturated soil is a recipe for flash flooding.

As a result, a Slight Risk of excessive rainfall is in place with a Moderate Risk located over northern Alabama, northwest Georgia, and southeast Tennessee. Residents in these areas should have a plan of action if severe weather threatens their respective locations.

In addition, high winds from the lower Great Lakes to the northern Mid-Atlantic Thursday night into Friday morning.

High Wind Watches are in place for portions of these regions as strong winds may result in downed trees and power lines.

The storm system responsible for the tornado outbreak will head for the Great Lakes tonight.

The cold front is forecast to clear the Mid-South and Ohio Valley shortly after midnight, thus ending the severe threat for these regions as high pressure builds in from the west in the early morning hours tomorrow.

By Friday, the cold front reaches the East Coast with a Marginal Risk of severe weather in place in the Southeast.

Further north, a damp and gusty Friday is in the cards for the Northeast with drier conditions returning by evening and sticking around into Saturday. 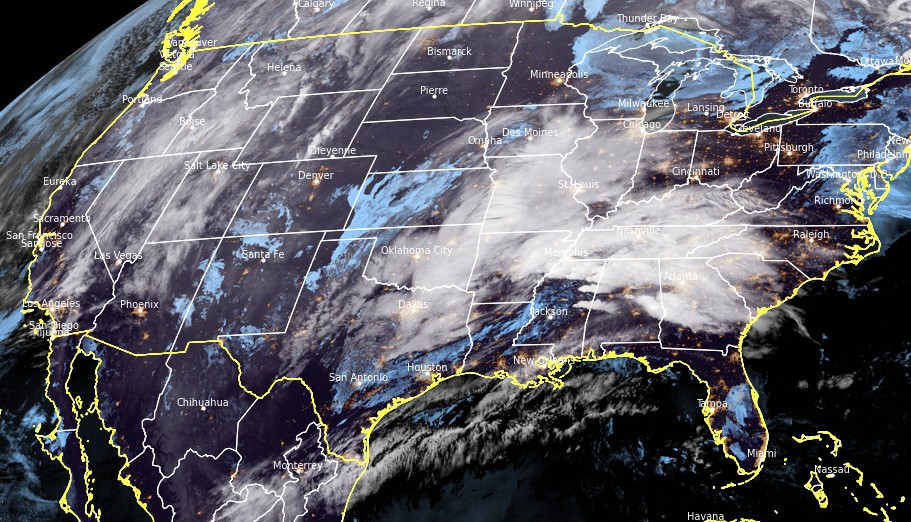 The affected area is a part of the same region that was hit with record cold conditions in February, causing major damage to infrastructure and leaving more than 50 people dead.