A severe weather outbreak lashed the South U.S. on Wednesday, March 17, 2021, unleashing tornadoes that led to serious damage to homes and businesses, particularly in Alabama and Mississippi. NOAA Storm Prediction Center (SPC) received a total of 25 tornado reports– 17 in Alabama, 3 in Mississippi, 2 in Montana, and 1 each in Louisiana, Arkansas, and Missouri. The outbreak is forecast to shift into the Southeast on Thursday, March 18, according to the National Weather Service (NWS).

Ahead of the severe weather's onslaught, SPC issued a high-risk alert — very rare for the month of March.

It was the first time the center declared a Level 5 out of 5 alert since 2012, highlighting the storm's exceptional intensity.

The SPC received a total of 25 tornado reports, mostly from Alabama, where many trees and several poles were blown down, and structures and homes were damaged. At least three homes were destroyed in Chilton County, which saw two possible tornadoes. 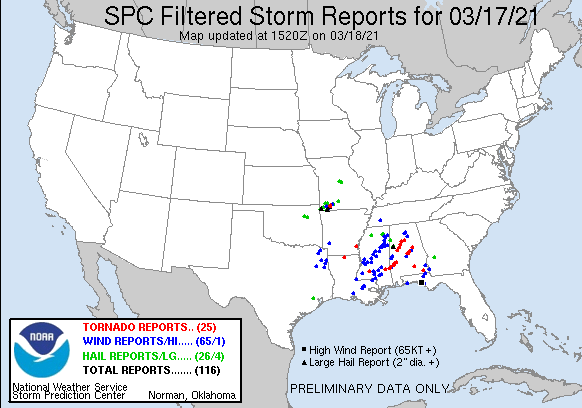 "About a minute before it got here, we jumped in the hall closet, a little, small closet. And just we heard it. You know, the sound from the house coming down. We were saved. We thank the Lord for that," resident Jimmy Baker told WSFA.

Two people sustained minor injuries in Clarke County after they were thrown from their home, officials said.

Almost 16 000 homes and businesses in Alabama were without power as of Thursday morning. Overall, more than 30 000 customers lost power across other affected states, including Louisiana, Arkansas, Mississippi, Georgia, and Florida.

STORM DAMAGE: This is damage left behind in Wayne County after a tornado-warned storm this afternoon. https://t.co/gu0tyfieXa pic.twitter.com/xdJQg1CJBZ

Tornado damage on Rosser Rd south of Tuscaloosa. The resident ran to a ravine in the woods and wasn’t injured. Photos from Jake Utley pic.twitter.com/QGvG2BFGUz

Here's a pic of the tornado near Woodville, MS earlier that crossed highway 61. I'll have video up after I finish chasing today #mswx pic.twitter.com/ZNrRLHzQbR

RETWEET: Incredible visuals are coming in from #Mississippi today as storms  rip across the south. Check out this #tornado in Strengthford, MS from this afternoon. #MSwx #tornadowarning pic.twitter.com/HuXSrHodqS

A little video of the tornado near Silas, AL #alwx #tornado #drone pic.twitter.com/iWjHri2s9v

In Moundville, south of Tuscaloosa, several homes were shown with holes in their roofs. Local media reported 20 to 30 homes in the area that sustained mostly minor damage.

In Mississippi, a dispatcher in Wayne County told weather.com that several homes and chicken houses were damaged. Officials were yet to confirm the extent of the damage as severe weather is ongoing and crews had not been able to visit the scene.

A regional outbreak of severe storms and tornadoes is forecast to shift into the Southeast on Thursday, according to NWS, adding that significant tornadoes, wind damage, and large hail will be possible.

"Scattered severe thunderstorms are expected through this evening from north Florida and south Georgia northeastward into the Carolinas and extreme southeast Virginia," NWS warned.

"All severe hazards are possible. Other isolated severe storms are possible from southern Ohio into the central Appalachians." 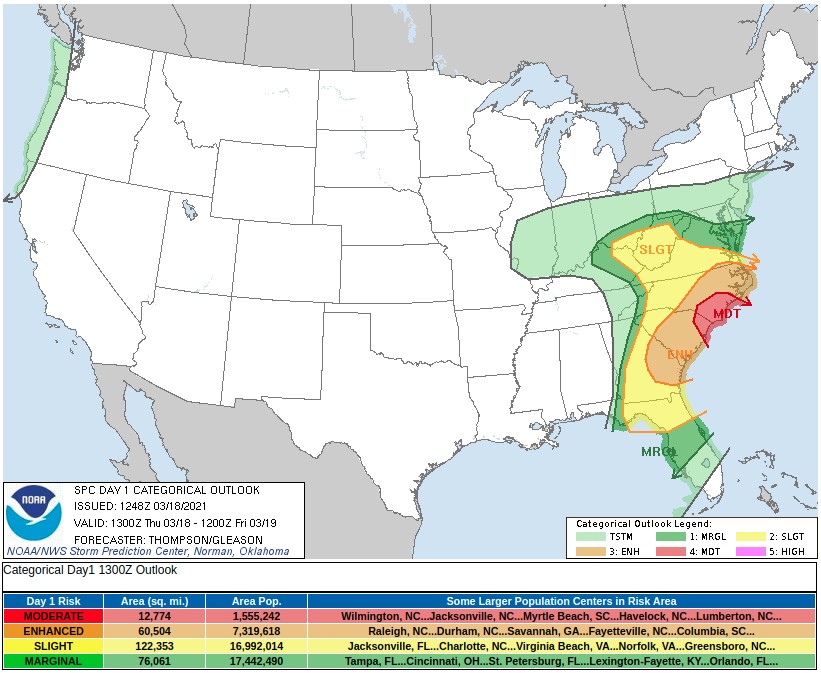