232 waterspouts/funnels have been confirmed over the Great Lakes from September 28 to October 4, 2020, in the second world record waterspout outbreak of the year, according to the International Center for Waterspout Research (ICWR).

"There were an average of 33 per day," said ICWR director Wade Szilagyi, also a meteorologist at Environment Canada. "That’s why I label it as a world record. You have to take into account the period."

Szilagyi noted that the number is remarkable and he has "never heard of anything like that."

David Piano, a storm chaser and a photographer, said he witnessed 38 waterspouts over a five-hour period. 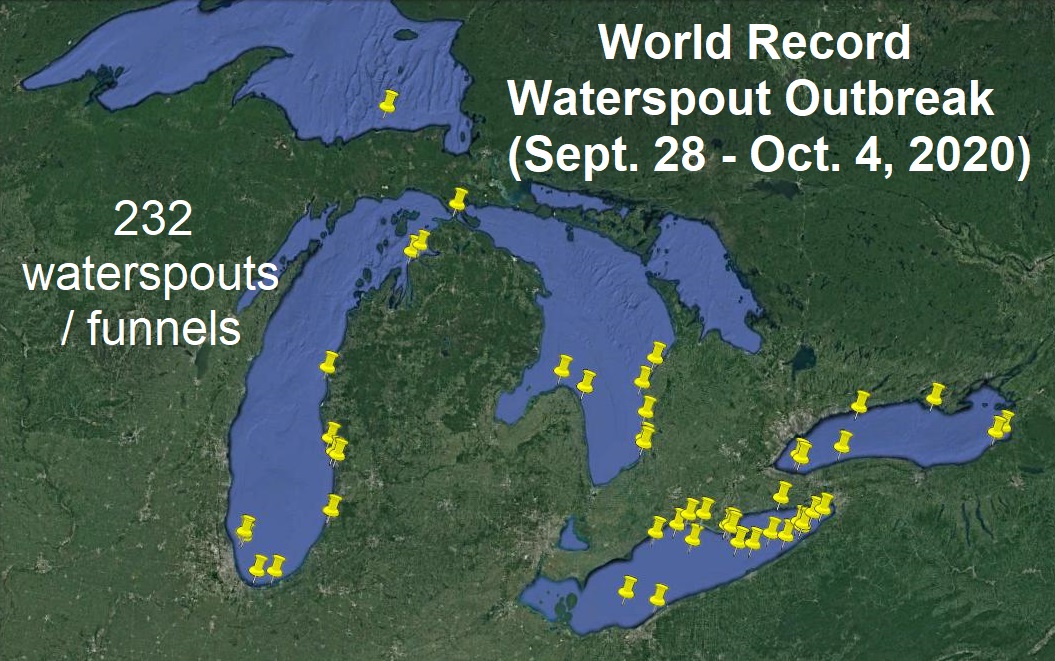 Both outbreaks resulted from cold air from Canada, which swept over the lakes, Szilagyi said. This enhanced low-level lapse rates or the drop-off of temperature with height, making the surface air susceptible to rise.

"This outbreak beats anything that’s happened in the past," Szilagyi remarked. "I’ve been studying waterspouts since the early ’90s. I focus on the forecasting and prediction of waterspouts."

For the past 26 years, Szilagyi has been helping guide research and prediction by stitching together a historical database, Matthew Cappucci of the Capital Weather Gang noted. He plans to publish a report once he gathers 30 years' worth of data, Cappucci added.

Szilagyi's findings already show that waterspout frequencies over the Great Lakes are much higher than previously thought.

"We don’t just occasionally get waterspouts. We get them more frequently than people have believed."

In 1994, Szilagyi made a nomogram to forecast waterspouts, Cappucci noted. He has refined the model over the years, feeding it with field reports and observations. Now, he is able to produce forward-looking numerical simulations that predict where waterspouts are likely to happen.

His team has started posting forecast maps this year, hoping to raise awareness of waterspouts prior to an outbreak.

"They can go to the part of the lake to see [waterspouts] based on these forecast maps and see where the hot spots are," Szilagyi said. "Lake Erie would be a hot spot one day and in the morning, I’ve seen it on social media before, they’re chatting back and forth, saying ‘we’re going to be heading down to the lake at sunrise.'"

Impressive waterspout that happened not that long ago, north of Vineland, Canada over Lake Ontario. One of the most intense waterspouts for motion I have ever seen. It appeared to have some supercell characteristics as it all came together. #onstorm #onwx #StormHour pic.twitter.com/wV8TPZv6lK

Of the Great Lakes, Eerie is the most primed to generate waterspouts since the lake is shallow and heats up faster. Lake Superior, on the other hand, is deep and cold, but water funnels still occur there.

The Florida Keys have been known to generate the highest density of waterspouts.