The 2020 ozone hole over the Antarctic is one of the largest and deepest in recent years, according to scientists with the Copernicus Climate Change Service (C3S). The hole had grown to 23 million square km (8.8 million square miles)– over twice the size of the U.S. This is above average for the last decade and is spreading over much of the Antarctic continent.

"There is much variability in how far ozone hole events develop each year," said Vincent-Henri Peuch, Director of Copernicus Atmosphere Monitoring Service at ECMWF.

"The 2020 ozone hole resembles the one from 2018, which also was a quite large hole, and is definitely in the upper part of the pack of the last fifteen years or so."

"With the sunlight returning to the South Pole in the last weeks, we saw continued ozone depletion over the area. After the unusually small and short-lived ozone hole in 2019, which was driven by special meteorological conditions, we are registering a rather large one again this year, which confirms that we need to continue enforcing the Montreal Protocol banning emissions of ozone-depleting chemicals."

NASA’s Ozone Watch reports the lowest value of 95 Dobson Units recorded on October 1, and scientists are seeing indications that this year's ozone hole has appeared to have reached its maximum extent.

The large and deep ozone hole has been driven by a strong and stable cold polar vortex, which kept the temperature over Antarctica consistently cold.

2020's #OzoneHole is both larger and deeper than most in recent years. This is being driven by a strong, stable and cold polar vortex, with all signs pointing to continued ozone depletion in the coming days.#Ozone monitoringhttps://t.co/c2tPB8OBuQ pic.twitter.com/MPiae3I5tL 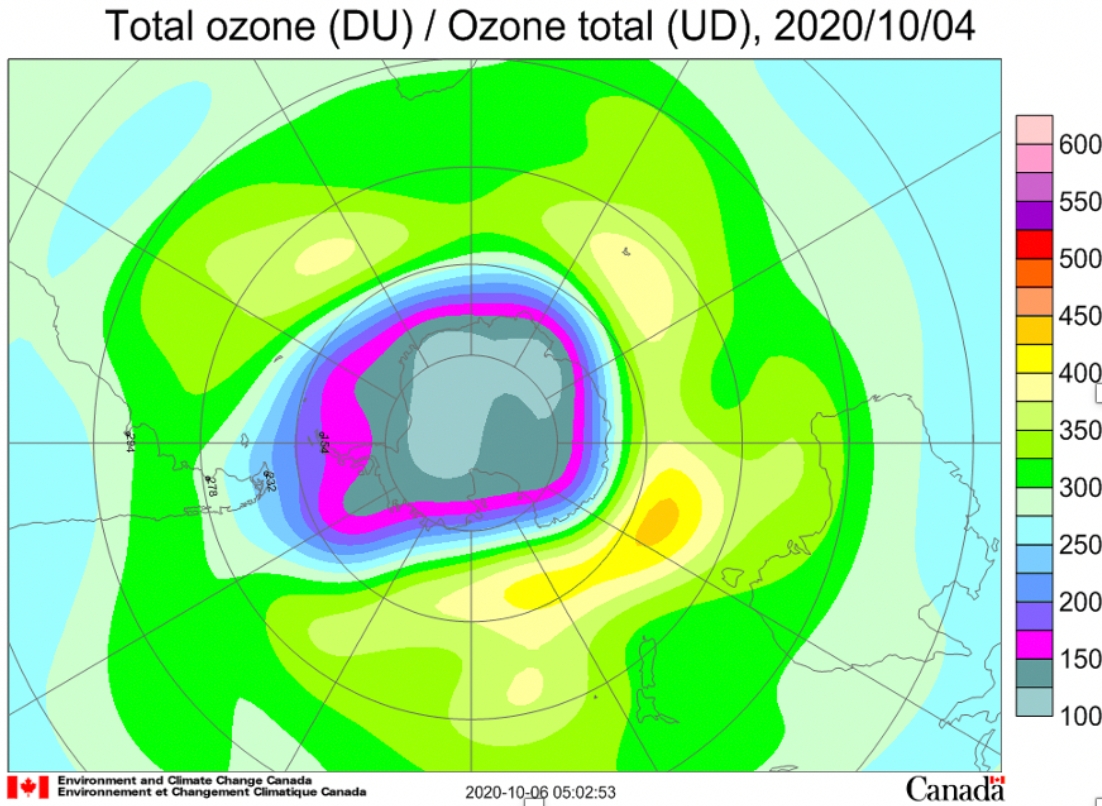 ​Ozone depletion is directly linked to the temperature in the stratosphere, the layer of the atmosphere between 10 to 50 km (6 to 31 miles) altitude. Polar stratospheric clouds only form at temperatures below 78 °C (172.4 °F).

Stratospheric ozone concentrations have been found to have reduced to near-zero values over Antarctica around 20 to 25 km (12 to 15 miles), with ozone layer depth just below 100 Dobson Units.

The ozone hole over the Antarctic increases in size during the Southern Hemisphere spring season, which is from August to October. It reaches its maximum between mid-September and mid-October.

When temperatures in the stratosphere begin to rise in the late Southern Hemisphere spring, ozone depletion slows down as the polar vortex weakens. By the end of December, ozone levels return to normal.