A huge area of sustained ozone depletion has developed over the Arctic-Canadian region — too late for the winter season, too early for spring, and unusually strong for the northern hemisphere.

The ozone layer is a natural layer of protective gas in the upper atmosphere that shields living things on Earth from harmful ultraviolet radiation from the Sun.

Under an ozone hole, this protective layer is gone, which may cause problems for living organisms as more of the harmful UV radiation penetrates.

"In the past days/weeks, we have been monitoring the onset of unusually strong ozone depletion over the north polar regions," Severe Weather Europe (SWE) meteorologists noted.

"We already had a big drop in the minimum ozone values in late November 2019 and January 2020, due to [the] development of a 'mini' ozone hole over northern Europe."

SWE said these small ozone holes over the North Pole do not develop because of a chemical destruction process, like over the Antarctic due to the aerosols. 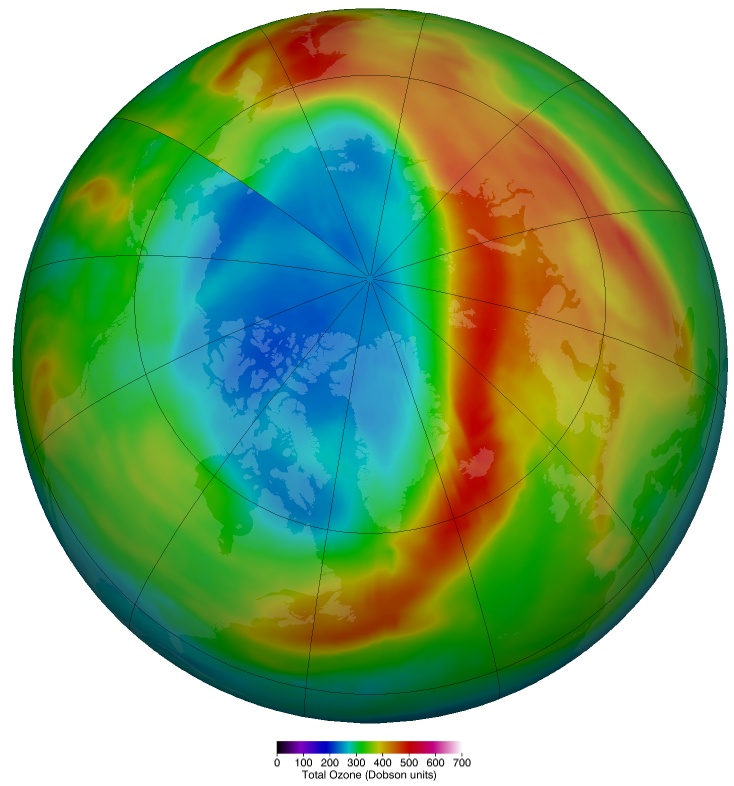 A minimum ozone graph also shows two powerful low spikes in late November and January, but these were short-lived events that likely happens each year during the cold season.

"What really got our attention, was the overall reduction of ozone, in early March, when the values should actually be going up slowly," said SWE.

"Something was off, and this time it was not just a quick low spike from a mini ozone hole, but a proper ozone destruction process." 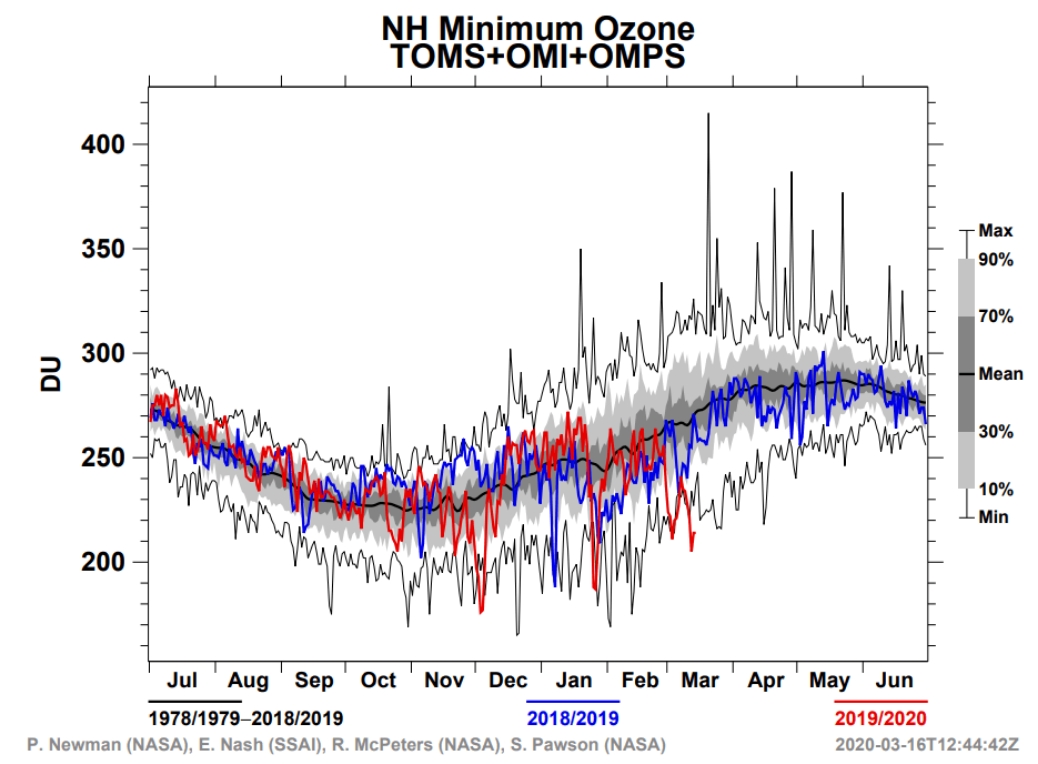 SWE's research showed that the ozone hole over the South pole develops due to a chemical process that tears the ozone– this process entails very cold air which is below -78 C (108.4 °F), sunlight, as well as human emissions of hazardous chloro-fluorocarbon (CFCs) and hydro-fluorocarbon (HFCs) aerosols.

Cold temperature lets stratospheric clouds to establish, and then sunlight reacts with the clouds to begin a photochemical process that breaks the ozone, resulting in the formation and growth of the ozone hole.

"As we mentioned, ozone destruction also needs sunlight, which is why this process is limited over the north pole," SWE said.

"By late February and March when sunlight reaches the pole, the stratosphere over the north pole is usually not cold enough anymore to produce these clouds, which are essential for the ozone destruction process."

The stratosphere can be unusually cold in some years, like this year, and it can generate stratospheric clouds at the same time that sunlight touches the pole, triggering ozone destruction.

In this graph, unusually cold temperatures can be seen in the lower stratosphere, which is at 50 hPa level. The temperature goes below the cloud producing each year, but typically, there is no sunlight to begin the process of ozone destruction.

As soon as sunlight reaches the pole again, the temperatures are already rising over the cloud-forming threshold. 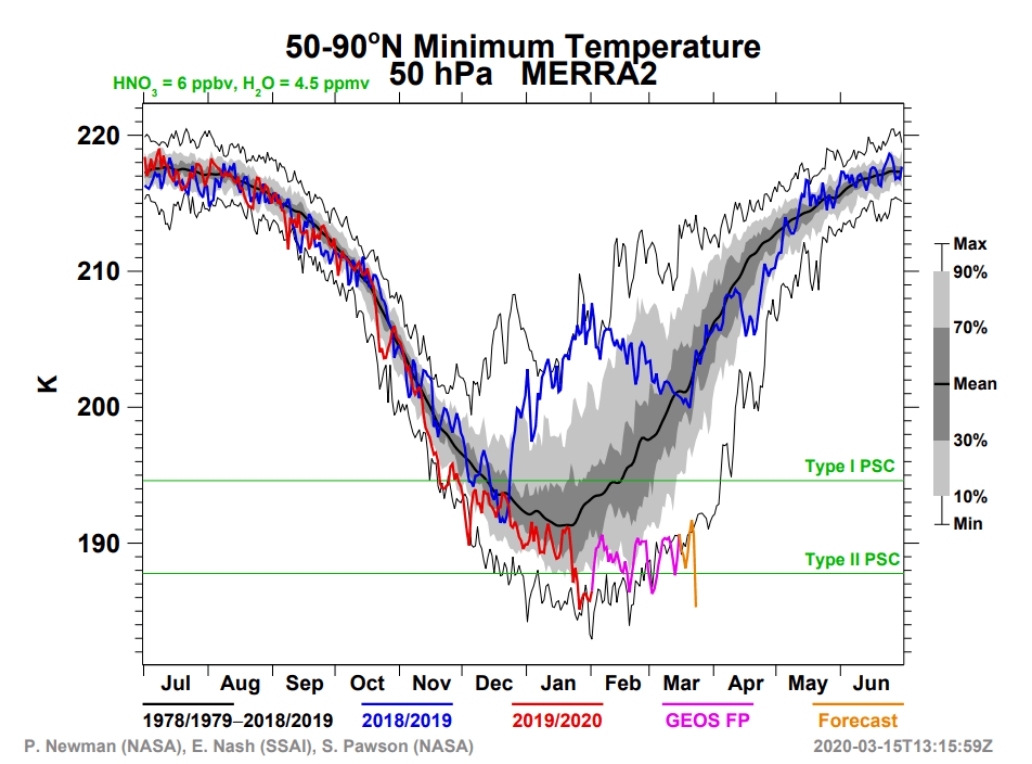 In another weather map, stratospheric clouds are shown forming over northern Canada, Greenland, and the Arctic ocean. The strong and cold polar vortex dominates at this level. 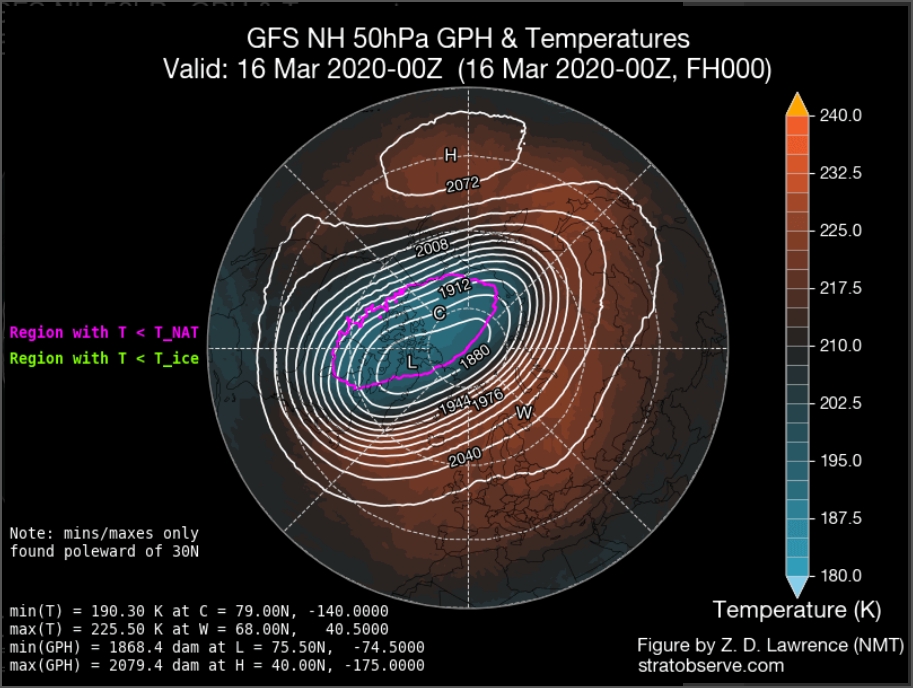 "Our own ozone analysis shows the ozone destruction in exactly the same area. In essence, this is an actual ozone hole, just like the 'infamous' one over the Antarctic," SWE wrote.

"It is unusually large for the Northern Hemisphere, and has record low ozone values, going down to 217 Dobson Units at lowest. It is still not as big and strong as the on over the South Pole."

This is because the temperatures over the South Pole are much colder and widespread, and the process of ozone destruction is more heavily triggered by the CFCs and HFCs aerosols.

"The polar cap ozone graph shows the comparison of ozone values for the past 40 years in February. This year we have seen the lowest February ozone levels across the north polar regions," SWE said.

"It is likely that these are the lowest values in much more than just the past 40 years, as there were lower aerosol emissions further back and there is a general trend for the cooling of the stratosphere over the past decades."

"We can perhaps see a slow reduction trend in the graphs, especially in the early decades, as the human aerosol emissions were high." 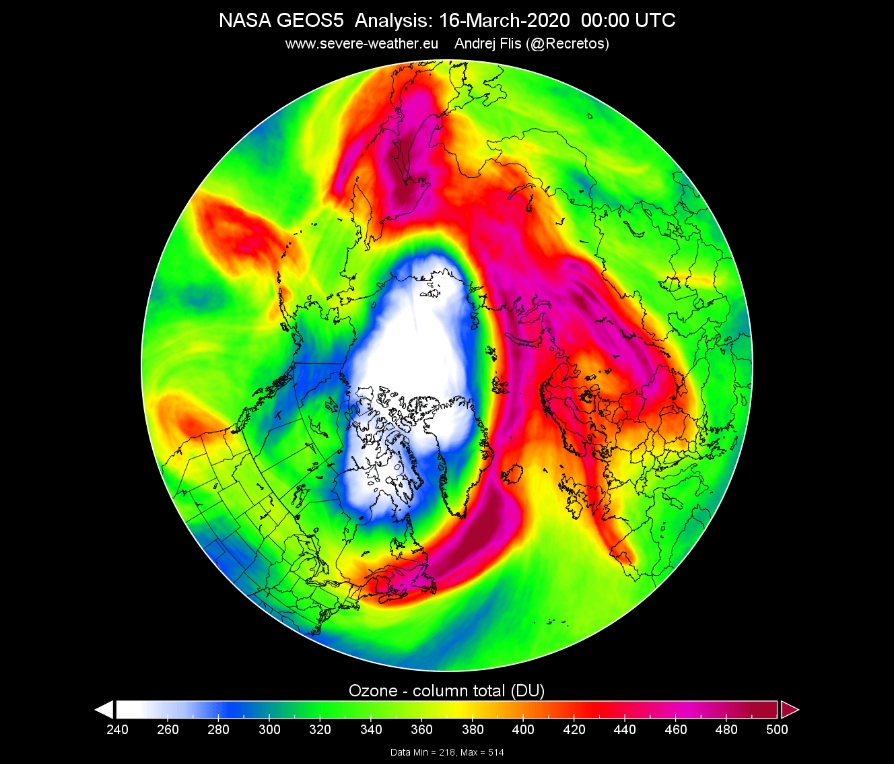 As March is not yet over, SWE said there is no full data for this month yet, so the last data point is for 2019. Looking into the past, SWE said two years stood out– 2011 and 1997, with very low ozone minimum values for March.

This indicates that there are some form of ozone destruction and possibly a formation of an ozone hole. 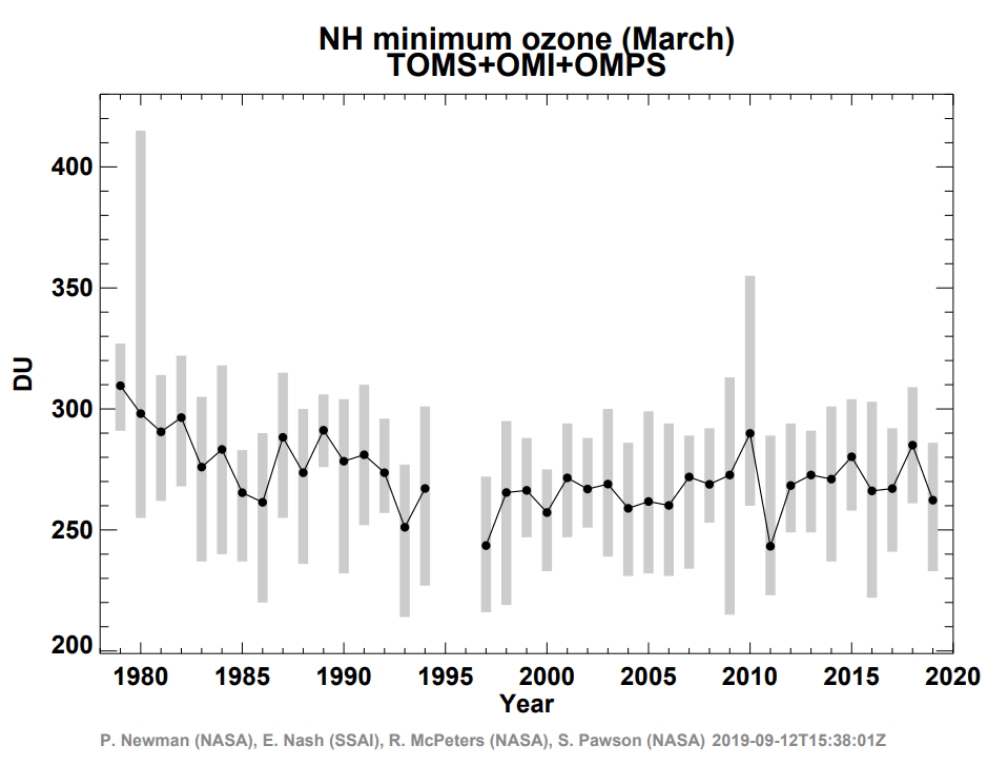 The data ozone analysis for 2020, 2011, and 1997 shows that these years have an ozone hole. However, 1997 and 2011 was not as powerful as 2020, which will possibly make this March ozone hole a powerful one that could break records, for many decades in the past and maybe also into the future.

"We already thought in 2011 that the ozone hole that year ill not be surpassed for a long time. But only 9 years later, we are witnessing a much stronger event," SWE stated.

SWE also noted that the ozone hole's future may be "not as bright" as the stratosphere is expected to undergo a warming event, wherein temperatures will get hotter as the Sun's influence gets stronger while it warms the polar region.

Eventually, it will be too warm for the stratospheric clouds to form, slowly reducing the process of ozone destruction. According to SWE's 10-day forecast of the ozone layer, there is a reduction of the size and intensity of the hole, even though it will be present for quite some time. 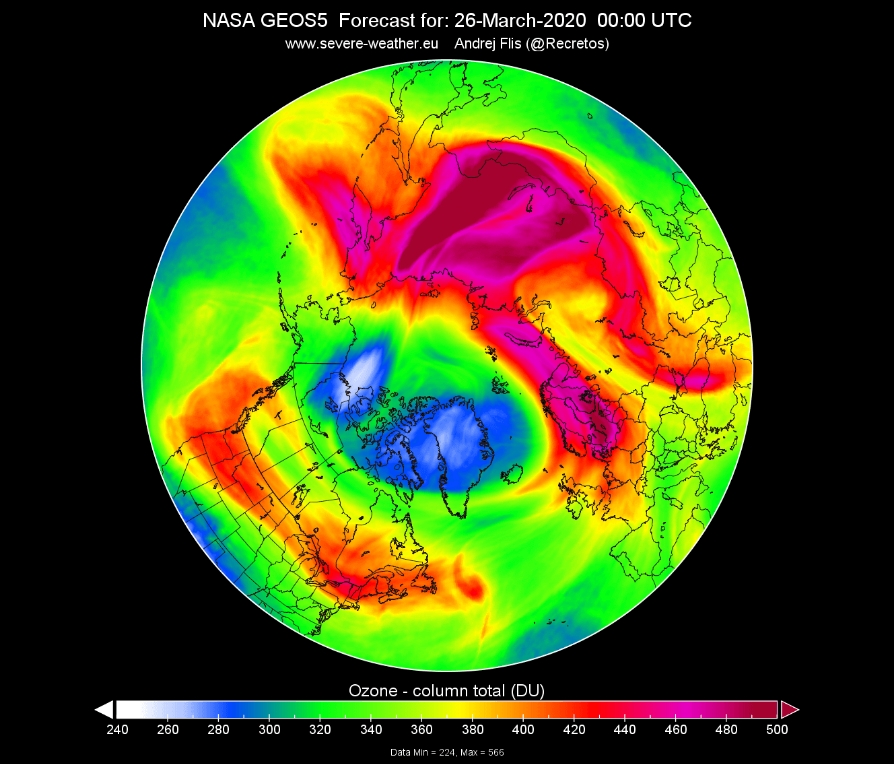