An analysis of satellite observations shows that ozone levels over the Arctic hit a record low for the month of March, NASA researchers reported on April 16, 2020. Ozone levels reached their lowest point on March 12 at 205 Dobson units. The depletion was caused by unusually weak upper atmospheric wave events from December 2019 to March this year.

"This year’s low Arctic ozone happens about once per decade," said Paul Newman, chief scientist for Earth Sciences at NASA's Goddard Space Flight Center. "For the overall health of the ozone layer, this is concerning since Arctic ozone levels are typically high during March and April."

Ozone is a highly reactive molecule composed of three oxygen atoms that naturally occurs in small amounts. The stratospheric ozone layer, which is about 11 to 40 km (7 to 25 miles) above the Earth's surface, acts as a sunscreen that absorbs ultraviolet radiation hazardous to living beings.

These waves travel upward from the mid-latitude lower atmosphere to interrupt the circumpolar winds that swirl around the Arctic. When they disrupt polar winds, they brig ozone from other parts of the stratosphere with them, restoring the reservoir over the Arctic.

"Think of it like having a red-paint dollop, low ozone over the North Pole, in a white bucket of paint. The waves stir the white paint, higher amounts of ozone in the mid-latitudes, with the red paint or low ozone contained by the strong jet stream circling around the pole," Newman explained.

The mixing's second effect is to warm the Arctic air. The warmer temperatures then create unfavorable conditions for the formation of polar stratospheric clouds that allow the release of chlorine for ozone-depleting reactions.

The stratospheric wave events were weak and did not interrupt the polar winds. The winds then acted as a barrier that prevented ozone from other parts of the atmosphere from restoring the low ozone levels over the Arctic. The stratosphere remained cold, in addition, resulting in the formation of polar stratospheric clouds that enabled chemical reactions to release reactive forms of chlorine and cause ozone depletion. 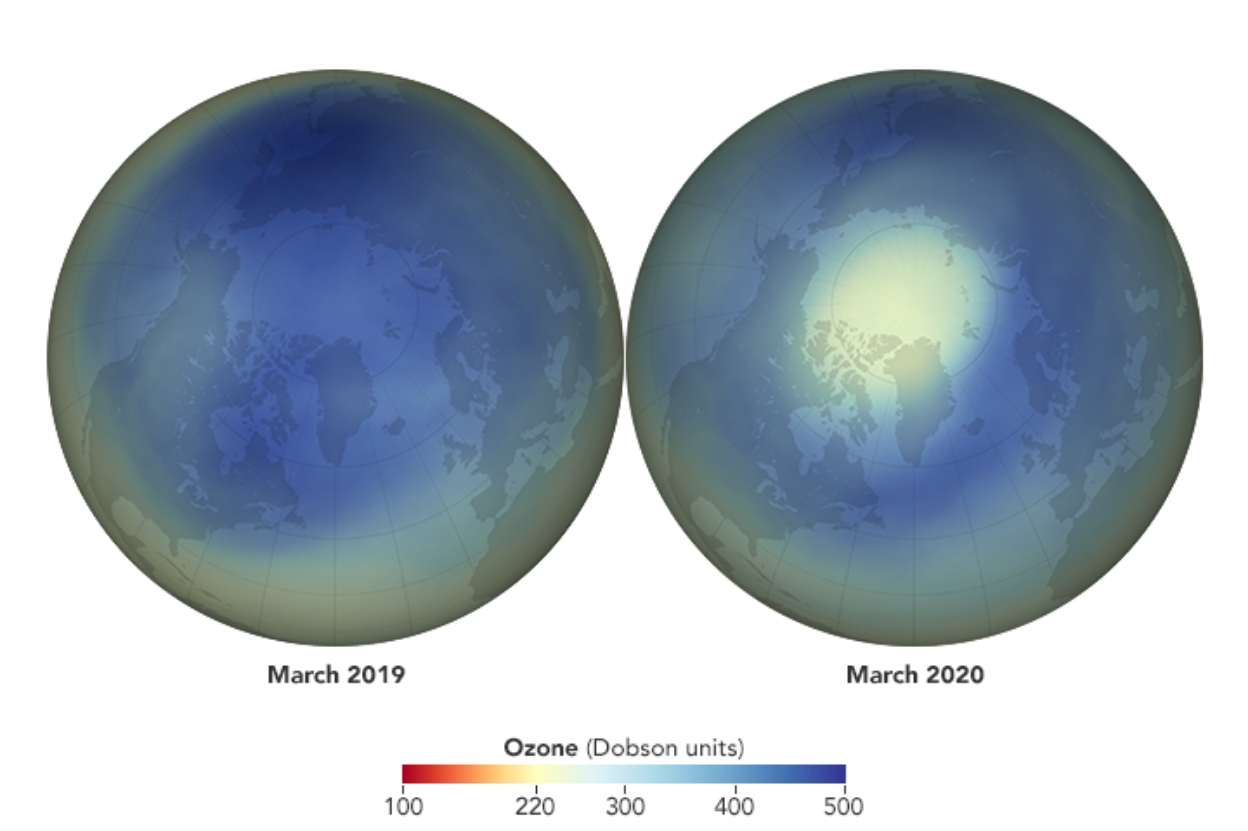 "We don’t know what caused the wave dynamics to be weak this year," Newman said. "But we do know that if we hadn’t stopped putting chlorofluorocarbons into the atmosphere because of the Montreal Protocol, the Arctic depletion this year would have been much worse."

Despite the ozone's record low this year, the ozone loss is still less than the yearly ozone "hole" that happens over Antarctica in September and October during spring in the Southern Hemisphere.