At least 41 people (up from previously reported 38) have been killed in two avalanches that hit eastern Turkey on Tuesday and Wednesday, February 4 and 5, 2020. Many of them were first responders who were searching for the survivors of the first incident, in which a van was buried under 5 m (16.4 feet) of snow. It's unknown how many remain under the snow, but there are fears there might be dozens. SAR operations are still in progress, hampered by blizzard conditions.

According to officials, the first slide took place at 16:45 LT on Tuesday, February 4 on a road connecting the Van province to its Bahcesaray district. Two vehicles were involved in the incident, a van and a snow-clearing machine. At least 5 people were killed.

The second avalanche hit around 12:00 local time Wednesday, injuring 53 rescuers and leaving an unknown number buried under snow. According to Daily Sabah, AFAD's Van Director Osman Uçar is among the injured.

AFAD said more search and rescue experts were deployed to the disaster zone, as fell as AFAD crew and the gendarmerie from Ankara.

In addition, 28 ambulances were dispatched and a mobile base station.

Interior Minister said the terrain is too rough to use vehicles to clear the snow, so crews can only use shovels and sticks.

As you can see on the Landsat-8 satellite image acquired on February 3, the region is mountainous and completely covered in snow. 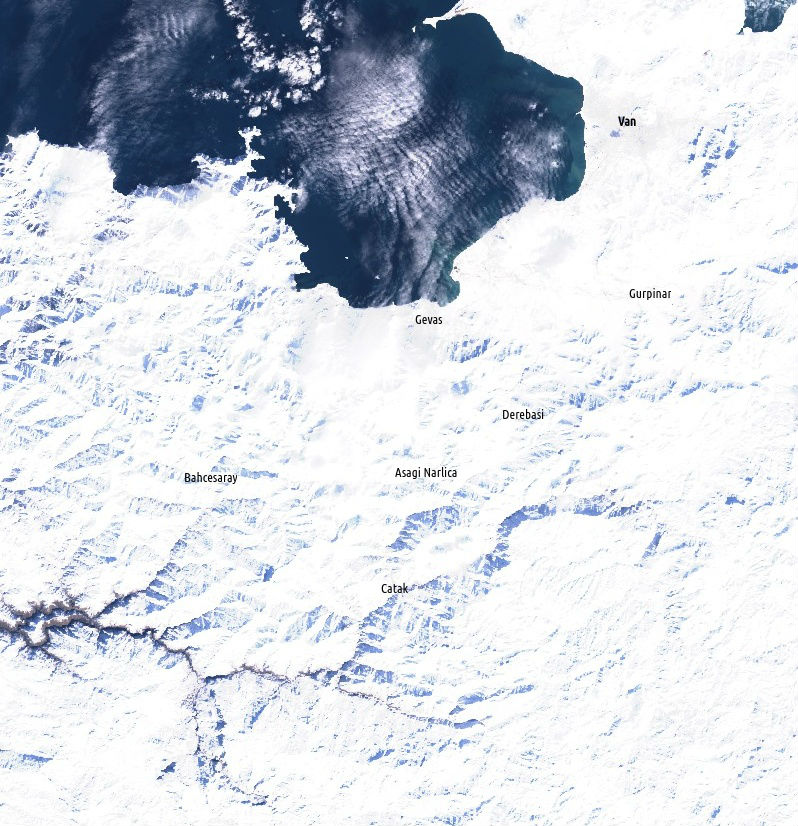 One of the survivors, Bahattin Karagülle — driver of the snow-clearing vehicle, said there was a strong blizzard in the area when the incident took place and zero visibility.

Karagülle said he came across a minibus while heading to Bahçesaray and saw an avalanche piling up behind them.

"I told the minibus driver to go back, but he told me to try again to clear the road," he said.

"Just as I started to clear it, the avalanche hit and the vehicle rolled over to the nearby stream. I waited there for about half an hour and thought people in the minibus would come to rescue me. When no one came, I tried to get out myself. I managed to break the window and got out. I looked for the minibus but did not see it."

According to the Daily Sabah, a large number of roads connecting remote areas to city centers in the region are currently closed due to heavy snowfall.