NASA has revealed the first global geologic map of Titan, the largest moon orbiting Saturn. The map showed a dynamic world of dunes, lakes, plains, craters, and other types of terrain. Aside from Earth, Titan is the only other known planetary body in the solar system known to have stable surface liquid.

The major difference between the surface liquid of Earth and Titan is that Saturn's moon has methane and ethane hydrocarbons– these are gases on Earth, but they act like liquids on Titan due to its frigid cold temperature. 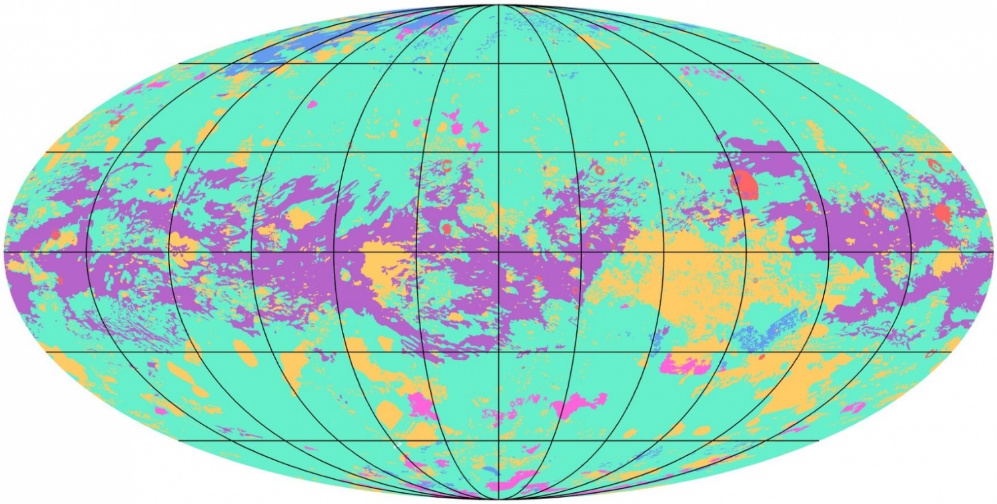 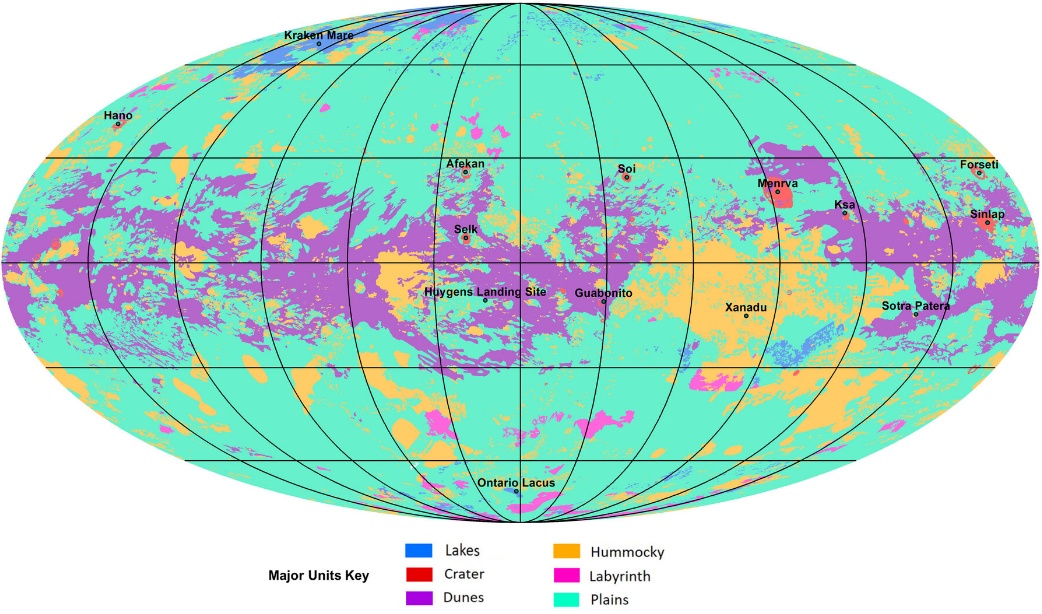 The surface of Titan is one of the most geologically diverse in the solar system, said NASA. Scientist and research author Rosaly Lopes said the active methane-based hydrologic cycle has shaped a complex geologic landscape.

"This hydrocarbon-based hydrologic cycle has been shaping Titan’s complex geologic landscape, giving rise to the variety of terrains shown in this map," the European Space Agency (ESA) explained.

"These include plains, which are broad, relatively flat regions (shown in pale green), labyrinths, which refer to tectonically disrupted regions often containing fluvial channels (shown in pink), hummocky, corresponding to hilly terrains, featuring some mountains (shown in pale orange), dunes, which are mostly linear and produced by winds on Titan's surface (shown in purple), impact craters (shown in red), and lakes, currently or previously filled with liquid methane or ethane (shown in blue)."

Researchers gathered data from the Cassini-Huygens mission, a cooperative project of NASA, ESA, and the Italian Space Agency (ASI). The spacecraft operated between 2004 and 2017 and completed more than 120 flybys of Titan.

Using data from Cassini radar imagery, the team was able to penetrate the opaque atmosphere of the moon.

Despite the huge difference between the Earth and Titan, there are features that are also similar. The map shows that Titan has different geologic terrains with a clear distribution with latitude, globally. Moreover, some terrains cover more ground as compared to the others.

Lopes noted that the study is an example of using combined instruments and data sets. She added that the team did not have global coverage with synthetic aperture radar. Instead, they used data from other instruments and modes for radar to correlate characteristics of different terrain units to conclude what the terrain is in areas that are missing radar coverage.

Titan has an active methane-based hydrologic cycle1 that has shaped a complex geologic landscape2, making its surface one of most geologically diverse in the Solar System. Despite the differences in materials, temperatures and gravity fields between Earth and Titan, many of their surface features are similar and can be interpreted as products of the same geologic processes3. However, Titan’s thick and hazy atmosphere has hindered the identification of its geologic features at visible wavelengths and the study of its surface composition4. Here we identify and map the major geological units on Titan’s surface using radar and infrared data from the Cassini orbiter spacecraft. Correlations between datasets enabled us to produce a global map even where datasets were incomplete. The spatial and superposition relations between major geological units reveals the likely temporal evolution of the landscape and provides insight into the interacting processes driving its evolution. We extract the relative dating of the various geological units by observing their spatial superposition in order to get information on the temporal evolution of the landscape. The dunes and lakes are relatively young, whereas the hummocky or mountainous terrains are the oldest on Titan. Our results also show that Titan’s surface is dominated by sedimentary or depositional processes with a clear latitudinal variation, with dunes at the equator, plains at mid-latitudes and labyrinth terrains and lakes at the poles.