Volcanic unrest continues at Whakaari/White Island and some monitored parameters show further increases in activity. Hazards on the island are now greater than during the past few weeks, forcing authorities to raise the Volcanic Alert Level to 2 and Aviation Color Code to Yellow. The patterns of signals are similar to those through the 2011—2016 period and suggest that the volcano may be entering a period where the eruptive activity is more likely than normal, recent observations can also be explained by the increased gas flux which leads to geysering and lake level changes. Eruptions of steam, gas, mud and rocks can occur with little or no warning.

Over the last several weeks, GNS Science GeoNet scientists observed an increase in the amount of SO2 gas output and volcanic tremor, which increased from weak to moderate strength.

The SO2 gas originates from magma (molten rocks) at depth and the longer-term data from the past few months suggests a possible increase in gas passing through the volcano from depth while the volcanic tremor can occur for many reasons, including the movement of gas through the volcano, changes in the geothermal system, and even surface activity (e.g. geysering). The number or locations of earthquakes beneath or near the island have not changed.

The crater lake level has been rising slowly since early-August and weak geysering-type activity has been observed at the edge of the lake around the active vents on the west side of the crater floor.

Other recent measurements made on the island (gas flow through the ground, fumarole and water chemistry, ground deformation, magnetics, visual images from the web cameras, and earthquake activity) show no significant changes. 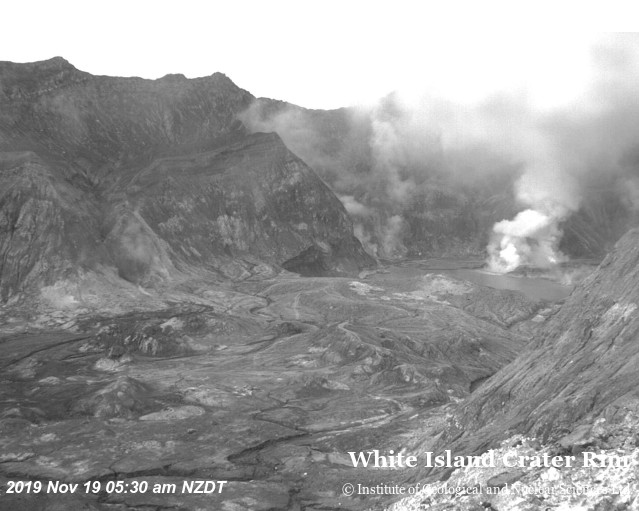 "Changes in volcano monitoring parameters like these are common and can be explained by a range of processes occurring inside the volcano and near the surface. Uncertainty about the exact meaning of these changes often arises from the range of possible processes," GeoNet Duty Volcanologist Michale Rosenberg noted.

"Overall, the monitored parameters are just above the expected range for minor volcanic unrest and associated hazards. The patterns of signals are similar to those through the 2011—2016 period and suggest that Whakaari/White Island may be entering a period where the eruptive activity is more likely than normal, recent observations can also be explained by the increased gas flux which leads to geysering and lake level changes."

GNS Science and the National Geohazards Monitoring Centre continues to closely monitor Whakaari/White Island for further signs of activity. Volcanic Alert Level 2 is mostly associated with unrest hazards on the volcano and could include eruptions of steam, gas, mud and rocks. These eruptions can occur with little or no warning.

Further information will be released as soon as it is available.