Devastating bushfires are burning in New South Wales and Queensland, Australia since November 4, 2019. Authorities have reported more than 150 properties destroyed, 3 fatalities, 5 people missing, and 40 others injured, as of November 9. Out of the 74 fires burning, 43 are still uncontained while 3 are at the emergency level. Locals are describing the scenes as apocalyptic.

The victims were identified as 69-year-old Vivian Chaplain, 63-year-old Julie Fletcher, and a man who has not been named yet.

On Saturday morning, NSW Rural Fire Service said over 100 homes and a school have been destroyed. RFS Commissioner Shane Fitzsimmons reported that this is just a preliminary figure as crews are still unable to reach wider parts of the affected areas.

For anyone wondering how bad the bushfires are #bushfires #Australia pic.twitter.com/xk4kFRjWkB

Close to where I live. Feeling super sorry for anyone actually near the fires. There’s ash and black leaves falling everywhere. #bushfires. #fires pic.twitter.com/bE9zyWzGh0 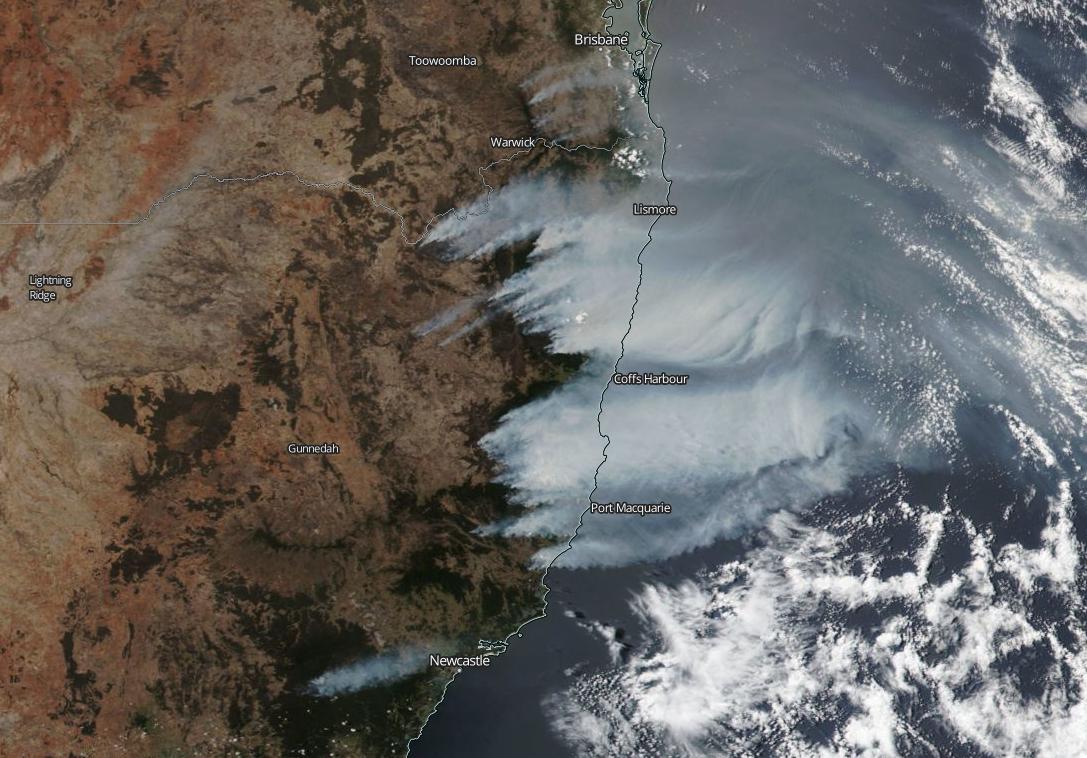 A Facebook post from the Pacific Palms Rural Fire Brigade showed the devastating destruction of the fires in New South Wales. "A furious fire had ripped through the town like none of us have seen and continued to make its way through properties in front of us," the post said. "Unfortunately we [have] seen things we’ll never forget today and never want to see again."

"There are more than 1 000 firefighters and support personnel out on these fire grounds at the moment," RFS crew said. "Our concentration is still very much on all of those fires still at emergency warning levels, which are predominantly in that Port Macquarie coast area and also towards Glen Innes."

This shows the dangerous conditions that have confronted firefighters and residents today. This is the crew from Warringah HQ at the Hillville fire near Taree. #nswrfs #nswfires pic.twitter.com/lIhnF8P1Qf

At 04:00 UTC, a second fatality was confirmed by NSW Premier Berejiklian. "Our thoughts and prayers, of course, go to the families and loved ones of those two deceased persons."

"We are seeing situations in NSW with these fires we have not seen before and of course concerns remain mainly around the Glen Innes area and also Port Macquarie and Taree regions and the townships around those communities."

She continued, "Please know that we may not be through the worst of it but also please know that we have the resources, the equipment, and the personnel to make sure we do everything we can to protect lives and communities."

At around 00:20 UTC, residents in Queensland areas were ordered to evacuate immediately by the Fire and Emergency Service. Premier Palaszczuk said 36 fires were still burning in the state.

Furthermore, over 160 prisoners have been evacuated from jails between Glen Innes and Grafton as fires continue to rage through parts of northern New South Wales.

As of 01:10 UTC, roughly 2 000 people have already been evacuated from Noosa bushfires in parts of Tewantin and Noosa North Shore.

At 12pm there are 81 fires burning across NSW with 43 uncontained. In yesterday's extremely dangerous fire activity, at least 100 homes were lost. This number is expected to increase. There have also been 2 people confirmed dead and 7 still unaccounted for. #nswrfs #nswfires pic.twitter.com/j054qngH3H

A local resident named Kim described the terrifying sight of the approaching fires, "The whole sky was red. It was pretty horrible."

At around 03:50 UTC, Fitzsimmons warned that the death toll is likely to rise as seven people are said to be missing. "We can’t rule out the really grave concerns that there could be more losses or indeed more fatalities as we get through and identify details across these fire grounds," he said.

Bushfires on Australia’s east coast have killed at least three people and have destroyed at least 150 homes. This is one of Australia’s worst bushfire seasons and it is occurring even before the start of the Southern Hemisphere summer https://t.co/ZOLHmB1eqJ pic.twitter.com/RNXmDofYel

At 07:30 UTC, a state of emergency has been declared across 42 Queensland regions. Authorities warned residents to brace for worse weather conditions over the following days.

Difficult firefighting conditions on the Hillville Fire, south of Taree. This is the fire burning near Diamond Beach. The fire is at Emergency Warning level. #nswrfs #nswfires pic.twitter.com/pJYWet1MEY

As of 13:30 UTC, RFS reported that there are still "74 bush fires across NSW, 43 still not under control. 1 fire remains at Emergency Warning at Hillville Rd on the Mid-Coast and 15 at Watch and Act."

At 12:30am, 74 bush fires across NSW, 43 still not under control. 1 fire remains at Emergency Warning at Hillville Rd on the Mid-Coast and 15 at Watch and Act. Crews are using favourable conditions on a number of firegrounds to undertake important backburning. #nswrfs pic.twitter.com/sDYXQfO6wt

This photo by Laura Begbie, taken yesterday at Lighthouse Beach, Port Macquarie, on the NSW mid-coast is like a still from a post-apocalyptic horror movie.#Bushfires pic.twitter.com/cJJUnGPkTB

Unprecented bushfire emergency in #Queensland and #NSW with warnings for 17 fires. The latest @CopernicusEU #Sentinel3 data from SLSTR provides a wide view of the situation as seen today in the local morning (NIR false color)@guardian. #NSWfires @BOM_SA @BOM_NSW @weatherdak pic.twitter.com/261rlzHYQj

If that’s what the fires look like from up here on the NSW Mid Nth Coast, huge prayers and thoughts for those down there! @NSWRFS @7NewsSydney pic.twitter.com/AlgiOgAHQI

Our @Qantas pilots performed a “go-around” because the smoke was too thick to land at Port Macquarie. Now safely on the ground after taking a different approach. @ABCemergency @abcnews #QF2170 pic.twitter.com/50r0VcIyOK