Authorities have ordered evacuation for around 500 000 people from the low-lying coastal villages and islands of Bangladesh in preparation for Tropical Cyclone "Matmo," renamed Bulbul by the India Meteorological Department (IMD). The cyclone made landfall Saturday night, November 9, 2019, over Indo-Bangladesh coast as Severe Cyclonic Storm. It crossed the coast abeam Sagar Islands with winds up to 120 km/h (75 mph) and gusts up to 130 km/h (81 mph).

IMD has asked local authorities and two ports to raise their highest alert as the storm is expected to spawn a storm surge as high as 2 m (7 feet) in coastal districts, with a maximum wind speed of 120 km/h (75 mph). Flooding, heavy rain, and damaging winds are all threats through Sunday, November 10. 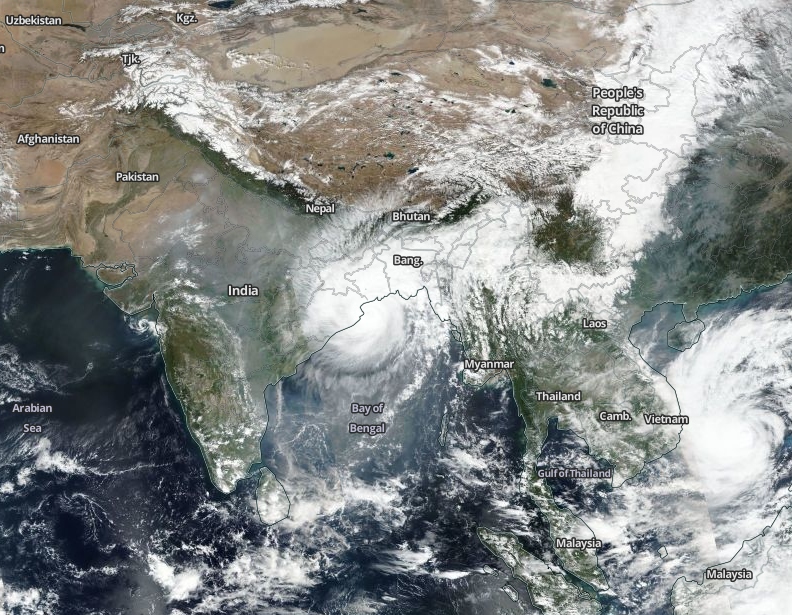 Matmo, currently the equivalent of a Category 1 cyclone, is centered 88 km (55 miles) South Southeast of the coastal town of Digha, moving north at 16 km/h (10 mph). The cyclone is set to make landfall somewhere along the Bay of Bengal coast of eastern India by Saturday night.

Rainfall totals of 76 to 254 mm (3 to 10 inches) with locally higher amounts are expected over West Bengal state into parts of southwest and central Bangladesh, possibly as far north as the megacities of Kolkata and Dhaka. Significant damage to homes, electric lines, trees, and crops is also forecasted.

According to disaster management secretary Shah Kamal, there are plans to displace around 1.5 million people before Matmo is expected to hit the Bangladesh coast at around 20:00 LT.

Authorities have already suspended a nationwide school test, canceled holidays of officials in coastal districts, and canceled a traditional fair that would be attended by around 10 000 people in the Sundarbans. Moreover, operations at Mongla and Chittagong, the nation's two major ports, have also been suspended.

Around 55 000 volunteers have been deployed to go door-to-door and warn people of the storm.

Cyclone ‘Bulbul’: Naval Ships and Aircraft Standby for Rescue and Relief Ops. Naval Aircraft deployed in the Bay of Bengal have been warning fishing boats about the impinging cyclone and advising them to return to the nearest harbour for shelter.#CycloneBulbul pic.twitter.com/80ssK3yydL

Strong cyclones commonly pound the country's low-lying coast, which is home to 30 million people. The storms usually leave a trail of devastation in their wake. Over the past few decades, hundreds of thousands of residents have died in such calamity. Fortunately, Bangladesh has improved its disaster preparedness, lowering the number of fatalities since 2007 Cyclone Sidr, which killed over 3 000.

Early cyclone warning systems have also improved, giving authorities more time to alert and displace residents. Shelters have been built over the past years, and officials have ordered school buildings and mosques to be used as a refuge in addition.

In May 2019, Tropical Cyclone "Fani," the most powerful storm to hit the country in five years, struck the area and killed over a dozen people.

Matmo made landfall over Indo-Bangladesh coast as Severe Cyclonic Storm, crossing the coast abeam Sagar Islands with heavy rain and winds up to 120 km/h (75 mph), gusting up to 130 km/h (81 mph).

"The next 6 to 8 hours continue to be crucial for West Bengal as Bulbul would take another six hours to weaken into Cyclonic Storm after crossing the coast," Skymet Weather meteorologists said.

"Thus, the next 12 hours will be crucial. Storm surge will be from 2.5 to 3 m (8 to 10 feet) which would lead to inundation in the low lying areas. Lightning strikes are to be watched out for, which may be damaging. Coastal areas of West Bengal inclusive of Digha, Howrah, Hooghly, 24 Parganas, Medinipur are witnessing winds in excess of 100 km/h (62 mph) while Kolkata winds were in excess of 70 – 80 km/h (40 – 50 mph). Moving northeastwards further, it would head for the northeastern states of India as a depression. However, this would be not before Sunday morning."