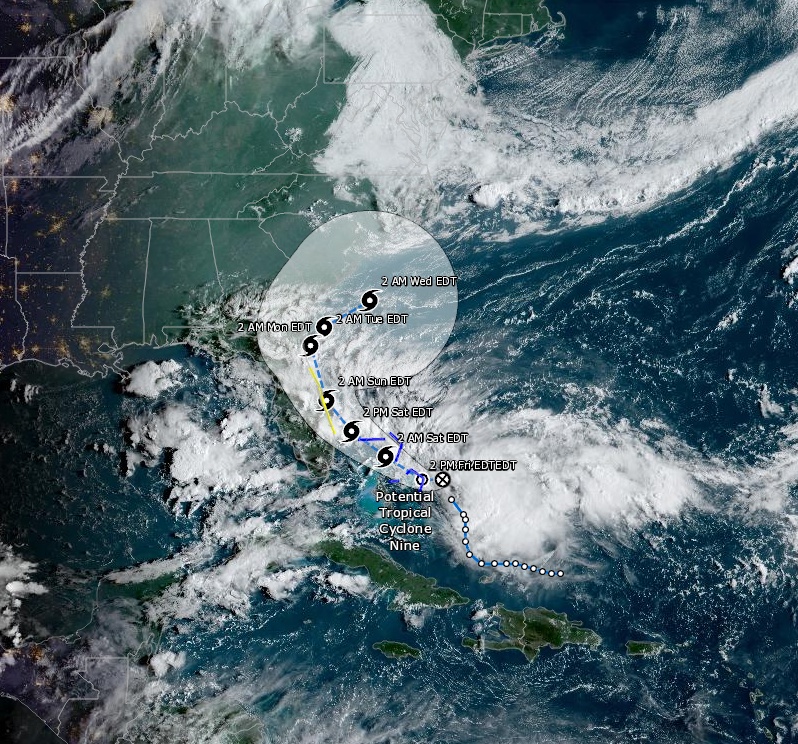 The distubance is moving NW at 9 km/h (6 mph) and this general motion is expected to continue with some increase in forward speed through the weekend.

On the forecast track, the system is anticipated to move across the central and northwestern Bahamas today, and along or over the coast of Florida Saturday and Saturday night (EDT), September 14.

It will be named Humberto. 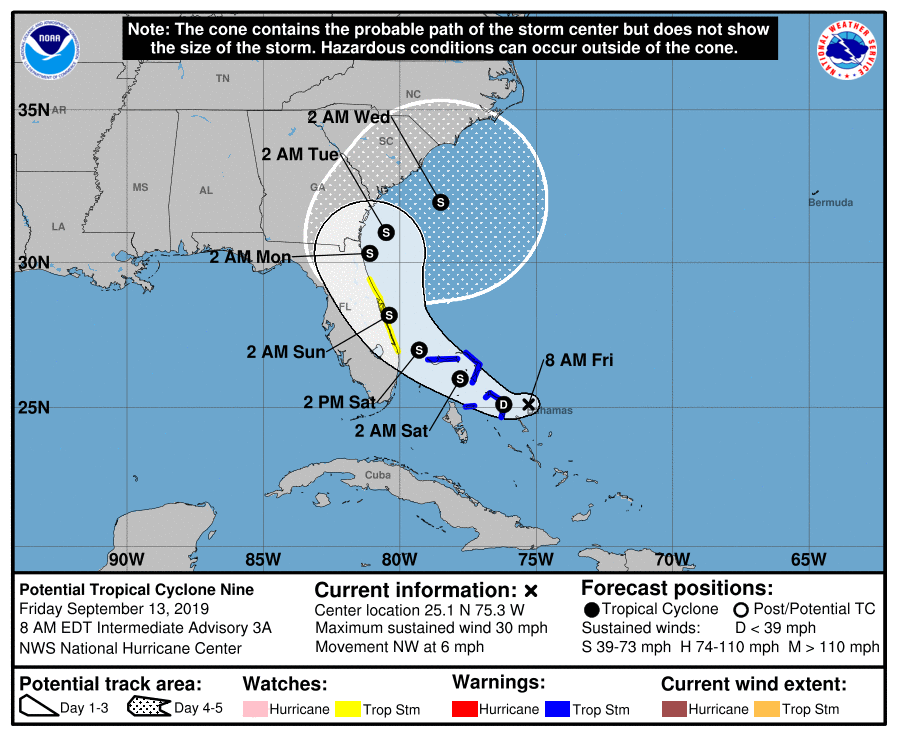 "Satellite imagery and surface observations indicate that the tropical disturbance is currently comprised of a trough elongated from west-southwest to east-northeast, with a vorticity center near a loosely curved convective band at the eastern end of the trough," NWS forecaster Beven noted.

"The track guidance indicates that the disturbance will move generally northwestward for 48 h or so, followed by a turn to the north and eventually to the northeast as the system moves through the weakness in the ridge.

"There is some spread in the guidance, with the GFS model taking a weaker system into the Florida peninsula while the UKMET and ECMWF models show a stronger cyclone farther offshore.

"Overall, there has been an eastward shift of the guidance since the previous advisory, especially after 72 h. The new forecast track is thus also nudged a little to the east and now calls for the system to spend less time over the Florida peninsula than previously forecast.

"The new forecast track is to the left of the center of the guidance envelope and the consensus models, and additional adjustments may be necessary once the circulation center becomes better defined.

"The disturbance is currently in an environment of moderate southwesterly shear and upper-level divergence caused by the upper-level low and a shortwave trough extending from the low eastward to the southeastern Bahamas.

"The shear should gradually diminish during the next couple of days, which should allow the disturbance to develop into a tropical cyclone and intensify.

1. The system is expected to become a tropical storm and bring tropical-storm-force winds and heavy rainfall to portions of the northwestern Bahamas today and Saturday. Significant storm surge is not expected in the northwest Bahamas from this system. Residents there should follow any advice given by local officials.

2. The system could bring tropical-storm-force winds to portions of the Florida east coast over the weekend. Residents there should monitor the progress of this system and follow any advice given by local officials.

3. Heavy rainfall is possible from Potential Tropical Cyclone Nine across portions of eastern Florida into this weekend, which could produce flash flooding. There is greater uncertainty than usual in heavy rainfall prospects farther north across the Carolinas.

4. Note that forecast uncertainty for these disturbances is generally larger than for tropical cyclones, especially beyond 48-72 hours.