Internal Displacement Monitoring Center (IDMC) records show that over seven million people have been displaced from their residences due to natural disasters during the first six months of 2019.

There were about 10.8 million new displacements worldwide in the first half of 2019, seven million triggered by disasters – the highest mid-year figure IDMC has ever recorded – and 3.8 million by conflict and violence, IDMC said in a report published on September 12, 2019.

Extreme weather events, particularly storms and floods, were responsible for most of the disaster displacement. Cyclones Fani and Idai triggered more than four million displacements between them and devastating floods in Iran affected 90% of the country.

The numbers do not yet include records from the devastation of Hurricane "Dorian," which destroyed 90% of the Abaco Islands in the Bahamas. 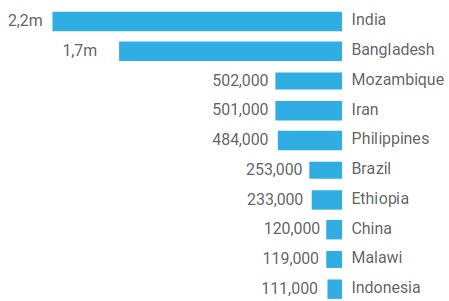 Between 2008 and 2018 about 3.6 million people were displaced on a yearly basis, the majority triggered by flooding due to monsoon rains. India is also prone to other sudden-onset and slow-onset hazards including earthquakes, tsunamis, cyclones, storm surges and drought.

India is closely followed by Bangladesh, making a total of 3.9 million for both countries in 2019 / more than a half.

Bangladesh is one of the world’s most disaster-prone countries due to its location and population density, which result in high levels of exposure and vulnerability, IDMC said.

Tropical storms and cyclones regularly flood coastal areas and yearly monsoons affect much of the country. Thousands of displacements take place each year as a result of these disasters, often taking the form of life-saving pre-emptive evacuations.

This is the result of decades of investment in community-based approaches to disaster risk reduction in the country. The majority of displacements associated with conflict are protracted cases dating back to the partitioning of the sub-continent in 1947 and the country’s independence in 1971.

"Disasters triggered a record seven million new displacements. The fact that the vast majority were associated with storms and floods suggests that mass displacement by extreme weather events is becoming the norm," the center said in the report.

Alexandra Bilak, IDMC's director, encouraged people to support the efforts of officials, saying "we must support national governments in their efforts to protect and assist IDPs, build peace and invest in sustainable development and climate change adaptation. Only then will we be able to reduce the upheaval, trauma, and impoverishment that many millions of people suffer each year, and reverse the trends laid out in this report."