A tropical depression near the Bahamas strengthened into Tropical Storm "Humberto" at 03:00 UTC on September 14, 2019. Humberto's latest forecast track takes its center north of the Bahamas and then well off the coast of USA. Intensification is expected while it moves over the warm Gulf Stream waters and Humberto could become a hurricane in 2 or 3 days.

Humberto has been moving erratically during the past 12 to 18 hours as the cyclone has been trying to organize, NWS forecaster Cangialosi noted.

During the next few days, a ridge to the north of the system over the eastern United States and the western Atlantic is expected to slide southeastward, with a weakness in the ridge developing due to a mid- to upper-level trough over the northeastern U.S.

This change in the steering pattern should cause the depression to slow down and turn northward off the east coast of Florida in 36 to 48 hours. The models show the trough over the northeastern U.S. amplifying early next week, which should cause Humberto to turn northeastward and then eastward away from the U.S.

A Tropical Storm Warning is in effect for the northwestern Bahamas, excluding Andros Island.

This system is not expected to produce significant storm surge in the northwestern Bahamas.

Swells generated by Humberto are expected to increase and affect the coasts of Central Florida to South Carolina late this weekend or early next week. These swells could cause life-threatening surf and rip current conditions. 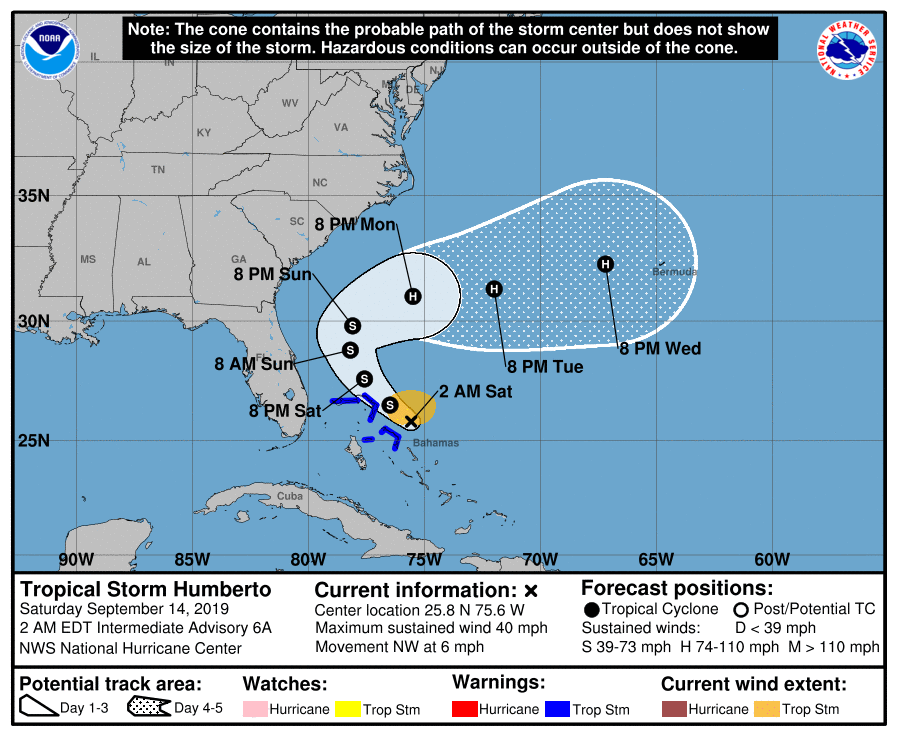 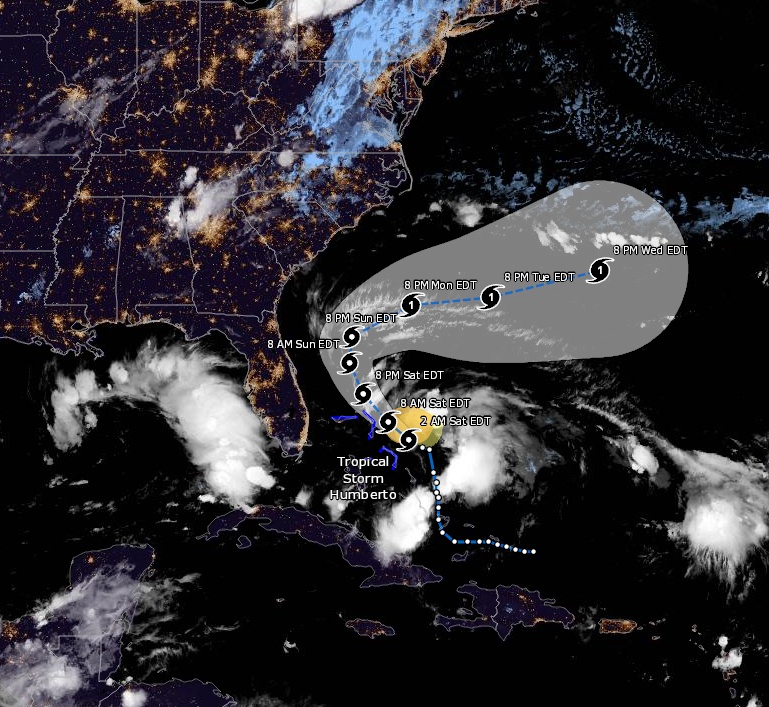 "The NHC track forecast has been nudged south and east of the previous one to be in better agreement with the latest consensus models," Cangialosi noted.

"Since there is increasing confidence that the storm will remain well offshore of the coast of Florida, the Tropical Storm Watch for that area has been discontinued.

"The storm is still feeling some effects of southwesterly shear and drier air, which is causing its lopsided appearance in satellite images and strong tilt in the aircraft data.

"The atmospheric conditions are expected to gradually become more conducive for strengthening while Humberto moves over the warm Gulf Stream waters. These environmental parameters support intensification, and the cyclone is expected to become a hurricane in 2 to 3 days.

"The NHC intensity forecast is largely an update of the previous one and in line with the HCCA and IVCN guidance."