This made it the 4th hurricane ever to make landfall on the Louisiana coast in July. Previous July landfalls were Hurricane "Bob" in 1979, Danny in 1997 and Cindy in 2005.

Life-threatening flooding is expected as slow-moving Barry continues into central Louisiana and into northern Louisiana on Sunday, July 14. 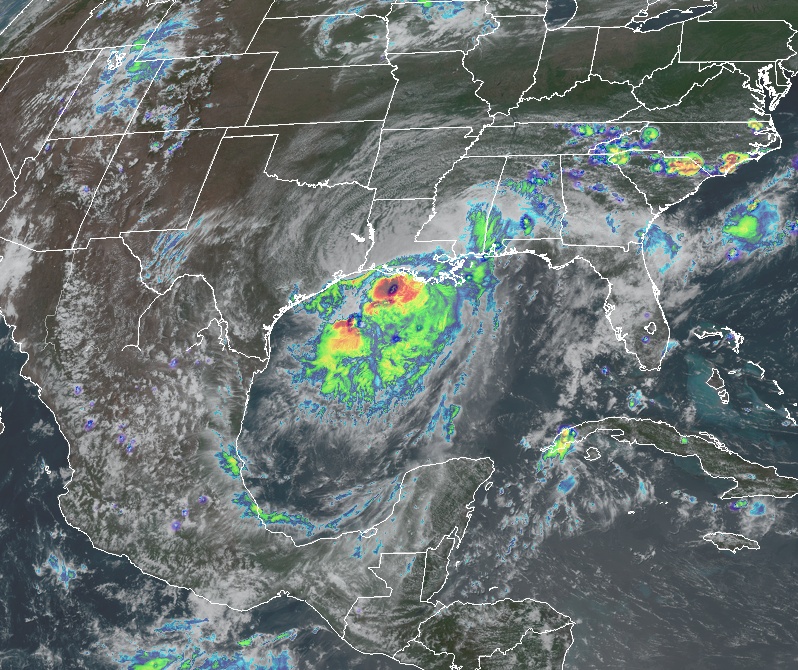 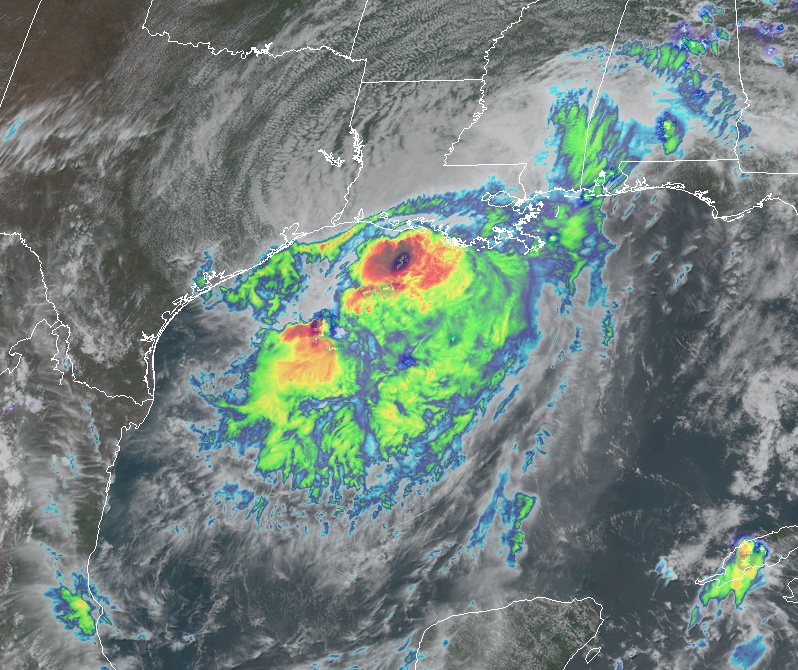 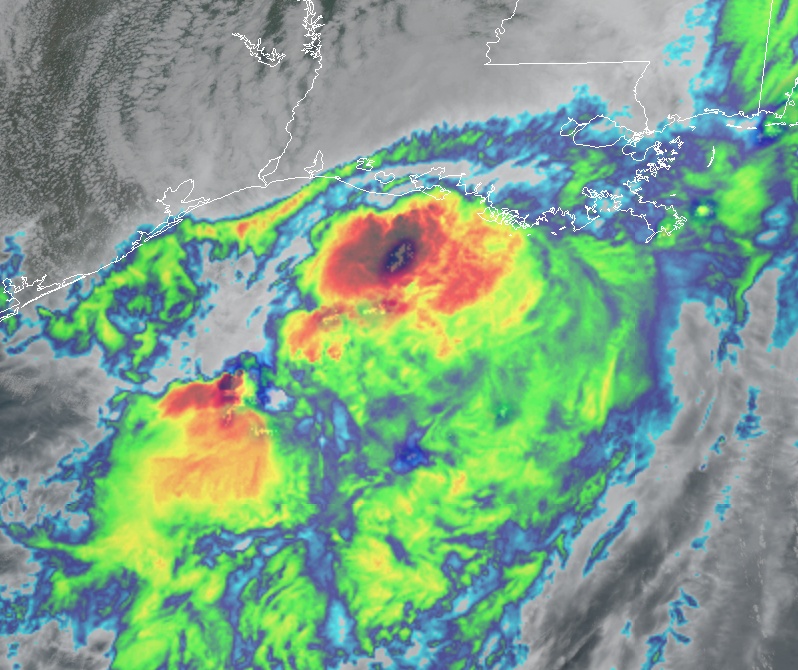 Barry becomes a hurricane as it is moving onto the Louisiana coast.

A Hurricane Warning is in effect for Intracoastal City to Grand Isle.

A Tropical Storm Warning is in effect for Mouth of the Pearl River to Grand Isle; Lake Pontchartrain and Lake Maurepas including metropolitan New Orleans; Intracoastal City to Sabine Pass.

A Storm Surge Warning is in effect for Intracoastal City to Biloxi; Lake Pontchartrain.

A Storm Surge Watch is in effect for Biloxi to the Mississippi/Alabama border.

A Hurricane Watch is in effect for Intracoastal City to Cameron. 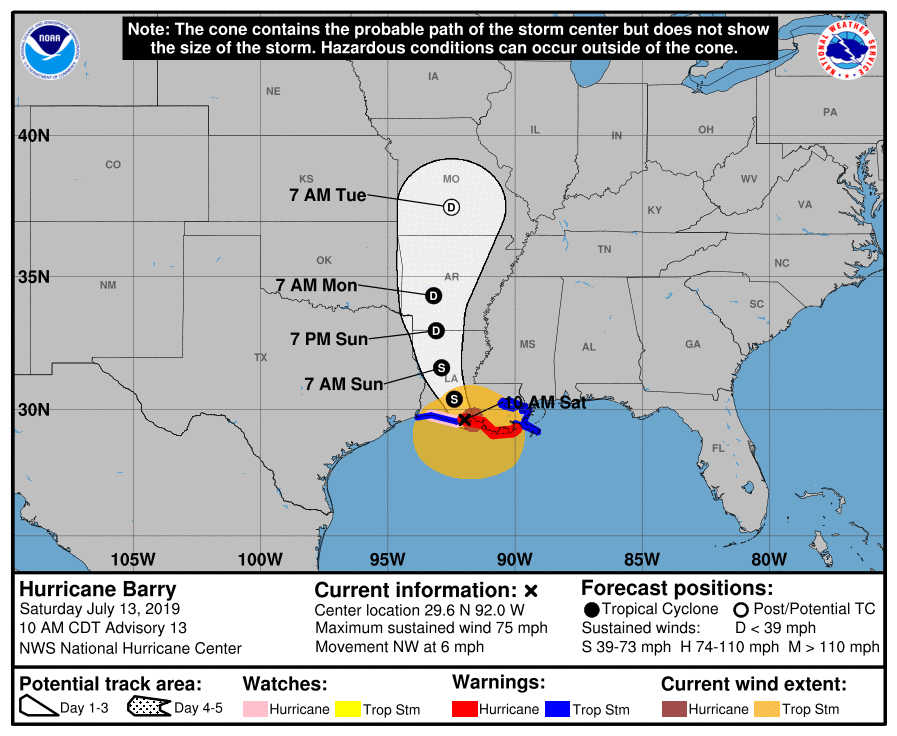 Life-threatening Tropical Storm "Barry" is moving closer to the coast of Louisiana and is expected to make landfall along its south-central coast later today (CDT), most likely as a Category 1 hurricane.

On the forecast track, the center of Barry will make landfall along the south-central Louisiana coast later today. After landfall, Barry is expected to move generally northward through the Mississippi Valley through Sunday night.

Strengthening is forecast before landfall, and Barry is expected to be a hurricane when the center reaches the Louisiana coast later today. 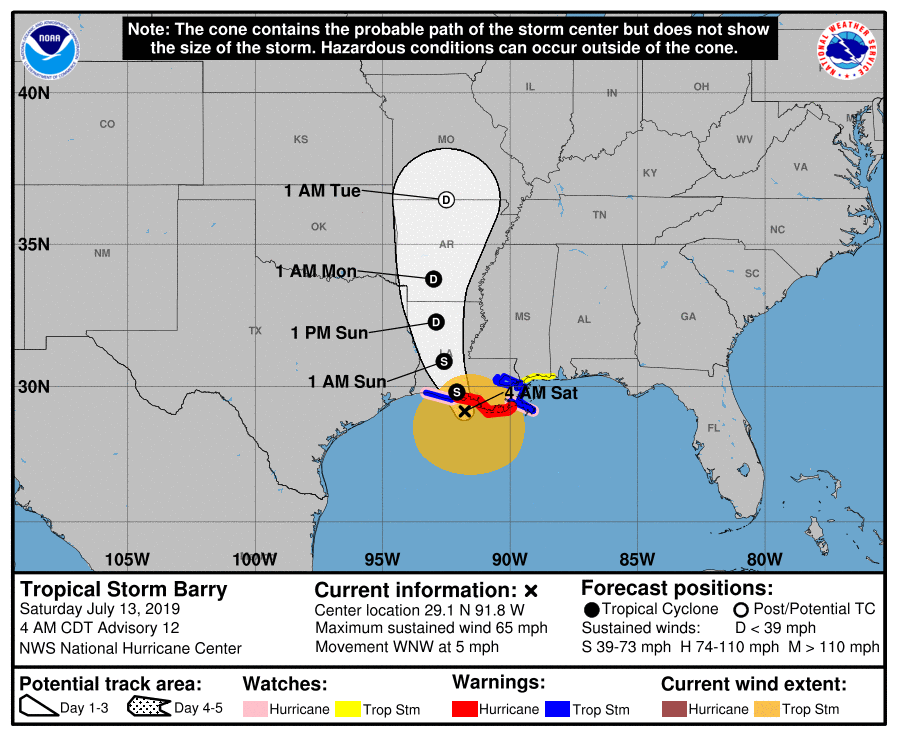 Tropical Storm #Barry is an unusual storm. In addition to being asymmetrical, #NOAA20’s instruments couldn’t see a convective core last night. This would ordinarily prevent strengthening, but Barry is forecast to attain hurricane status before making landfall in Louisiana. pic.twitter.com/Ja92NJgPNz

Circulation within #TropicalStormBarry is much more apparent in this #GOESEast loop from around 10 a.m. ET. As the storm bears down on the #GulfCoast, heavy rainfall and storm surge remain the biggest threats. Learn more: https://t.co/gyQhFlQuKx pic.twitter.com/vK4vcrkFNL

I really like @Weathernerds's interface for overlaying GLM lightning w/ #GOES16 visible imagery for Barry. The most active lightning is associated with a feeder band SW away from the center.

Pay closer attention to lightning on the SE flank, closer to where the mesovortex is at. pic.twitter.com/vKKgeorZ4h

Tropical Storm #Barry now has maximum winds of 65 mph – the strongest July named storm in the Gulf of Mexico since Hurricane Alex in 2010. pic.twitter.com/uROXOklCAw

1. There is a danger of life-threatening storm surge inundation along the coast of southern and southeastern Louisiana, portions of Lake Pontchartrain, and portions of coastal Mississippi where a Storm Surge Warning is in effect. Water levels have already begun to rise in these areas, with peak inundation expected to occur later today. The highest storm surge inundation is expected between Intracoastal City and Shell Beach.

2. The slow movement of Barry will result in a long duration heavy rainfall and flood threat along the central Gulf Coast, across portions of the Lower Mississippi Valley and north into the Tennessee Valley through the weekend into early next week. Flash flooding and river flooding will become increasingly likely, some of which may be life-threatening, especially across portions of southeast Louisiana into Mississippi. 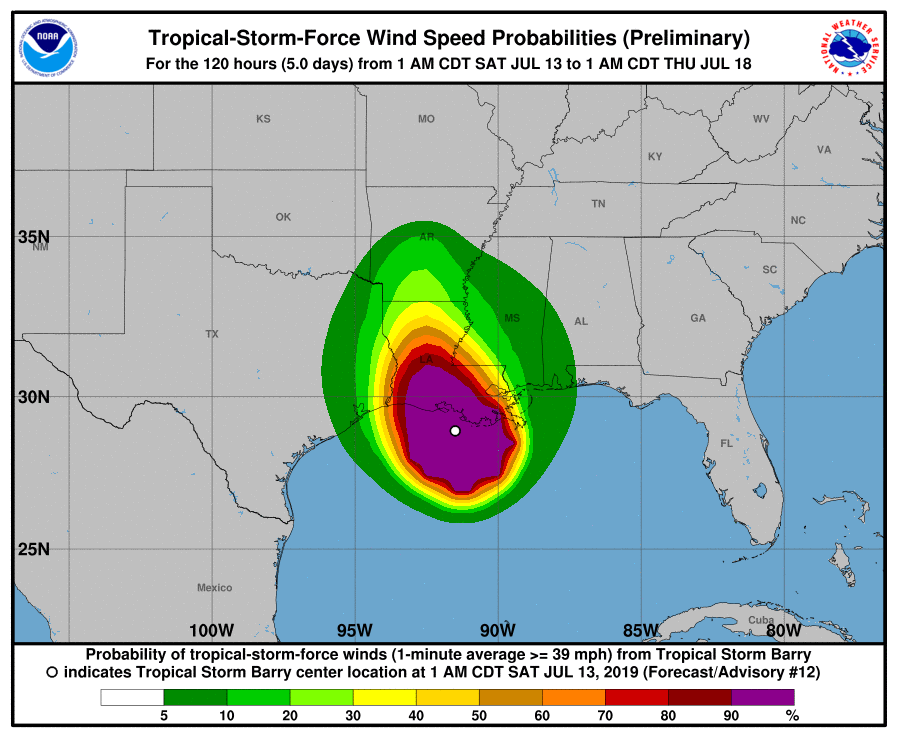