The Arctic freeze-up season is well underway, with ice extent increasing faster than average for most regions in November. Exceptions were in the Chukchi and Barents Seas, where the ice has been slow to form. Meanwhile, November snow cover over North America was the most extensive since 1966, the National Snow and Ice Data Center (NSIDC) reported in their analysis released December 4, 2018.

Sea ice extent increased quite rapidly during the early part of the month, bringing the extent within the interdecile range of the 1981 to 2010 climatology during the latter half of the month. This was due in part to the Laptev Sea finally freezing up after having extensive open water through the end of October, as discussed in their previous post.

There was also considerable ice growth in Hudson Bay, Baffin Bay, the Chukchi Sea, and the Kara Sea. This rapid growth is not particularly surprising, NSIDC scientists said.

As the sun has set in the Arctic, the atmosphere has strongly cooled. As soon as the remaining open ocean water loses its heat to the atmosphere, ice growth occurs. Further, the increased area of open water in summer had led to increased frequency of rapid ice growth events in mid to late autumn, in which more than 1 million km2 (386 000 mi2) of ice can form within a 7-day period (see Stroeve and Notz, 2018). 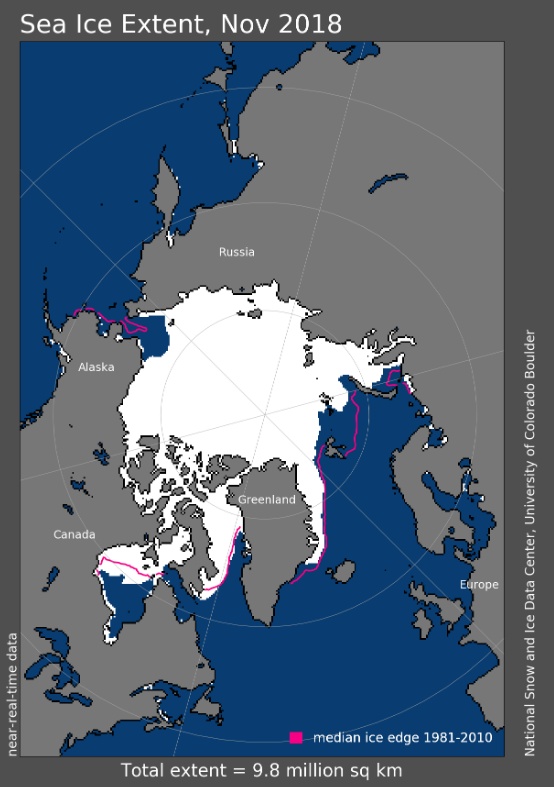 Despite relatively fast ice growth during November, at the end of the month substantial open water still remained in the Chukchi and Barents Seas. The Chukchi Sea was in general completely ice covered by the end of November in the 1980s through to the early 2000s.

However, low ice extent in the Chukchi Sea into late autumn has become quite common in recent years and this year’s extent is comparable to the new normal for this time of year in the region. Similarly, in the Barents Sea, low autumn extent has become common in recent years as warm Atlantic water is preventing ice growth farther north – a process called "Atlantification."

While parts of Alaska had their latest first snowfall, based on data at the Rutgers Global Snow Lab, North America as a whole had the highest November snow extent in the 1966 to 2018 record.

Above average snow cover was particularly notable over central and eastern Canada.

Over Eurasia, snow cover was slightly above average for this time of year. The extensive snow cover over eastern Canada was related to low pressure over the North Atlantic that brought cold air from the Arctic into the region. 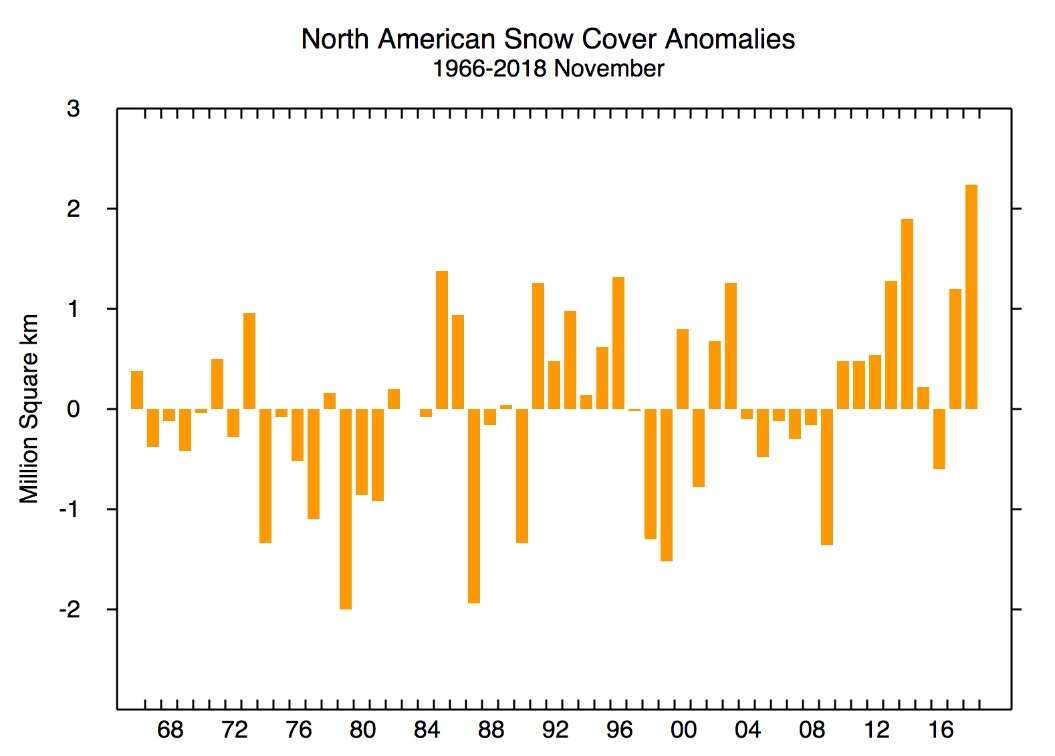 This graph shows snow cover extent anomalies in the Northern Hemisphere for November from 1966 to 2018. The anomaly, or departure from average, is relative to the 1981 to 2010 average. Credit: National Snow and Ice Data Center, courtesy Rutgers University Global Snow Lab

The "Atlantification" of the Barents Sea

The Barents Sea continues to be largely ice-free. This is part of a broader pattern emerging over the last decade of greatly reduced ice extent in this area in all seasons, especially from autumn through spring. 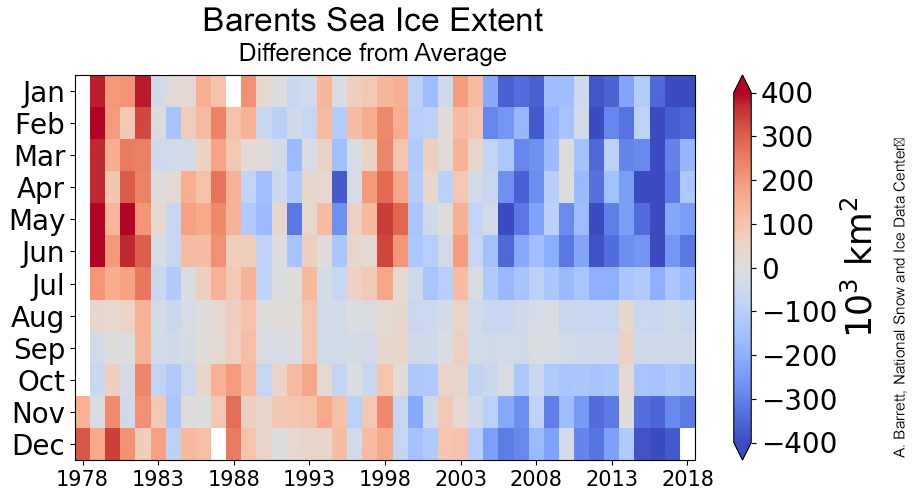 These reductions in ice extent appear to be heavily influenced by the inflow of Atlantic water into the region.

While increased temperatures and inflow of Atlantic water have been observed over the last two decades, this warm and salty water usually lies below the colder, less dense Arctic surface waters. This largely keeps the ocean heat from influencing the sea cover.

New research by Benjamin Barton and colleagues (Barton et al., 2018) suggests that the sea surface temperatures in the Barents Sea have increased in recent years as this warm Atlantic water has started to mix with the surface.

This graph shows average Sea Surface Temperature (SST) across the Barents Sea with a 12-month running mean (blue line). The linear trend for the periods 1985 to 2004 and December 2004 to 2016 are shown (green lines). Credit: Barton et al., 2018, Journal of Physical Oceanography

A key factor driving this mixing appears to be the decline in sea ice itself and corresponding less freshwater at the surface when that ice melts in summer. This leads to a weaker ocean density stratification, making it easier to mix warm, salty Atlantic waters upwards.

This can be viewed as a feedback mechanism – less ice means less summer melt and a weaker ocean stratification, helping to mix the Atlantic heat upwards, which in turn means less ice. Scientists have referred to this change as 'Atlantification' of the Barents Sea. The warm water from the Atlantic prevents ice formation and is the main reason why the winter ice edge in the Barents is farther north than in other parts of the Arctic.

Antarctic sea ice extent declined much more slowly than average in November, but large areas in the northern Weddell Sea and the ocean north of Dronning Maud Land have open, low-concentration pack ice.

Several polynyas have appeared near the Antarctic coast, in the Ross Sea, Thwaites Glacier region, Prydz Bay west of the Amery Ice Shelf, and in the Weddell Sea.

Meanwhile, cool conditions were present near Thwaites Glacier and the Amery Ice Shelf region, with temperatures 1.5 °C (3 °F) below average. 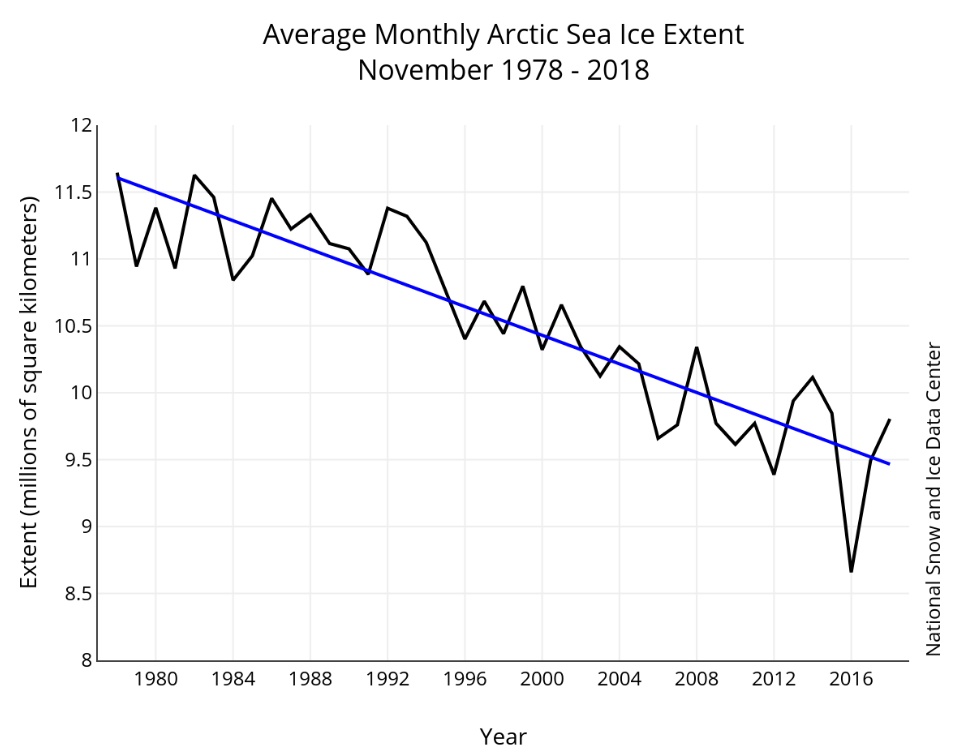 Air temperatures at the 925 mb level (about 2 500 feet above the surface) were modestly above average in November across most of the Arctic Ocean (up 2 °C or 4 °F), the main exception being slightly cooler than average conditions in the Laptev Sea.

Average low sea level pressure centered over the Siberian coast of the Kara Sea, a pattern tending to draw in cold continental air from Siberia over the Laptev Sea.

By contrast, temperatures were up to 4 °C (7 °F) above average over the East Greenland Sea and extending east over Scandinavia. 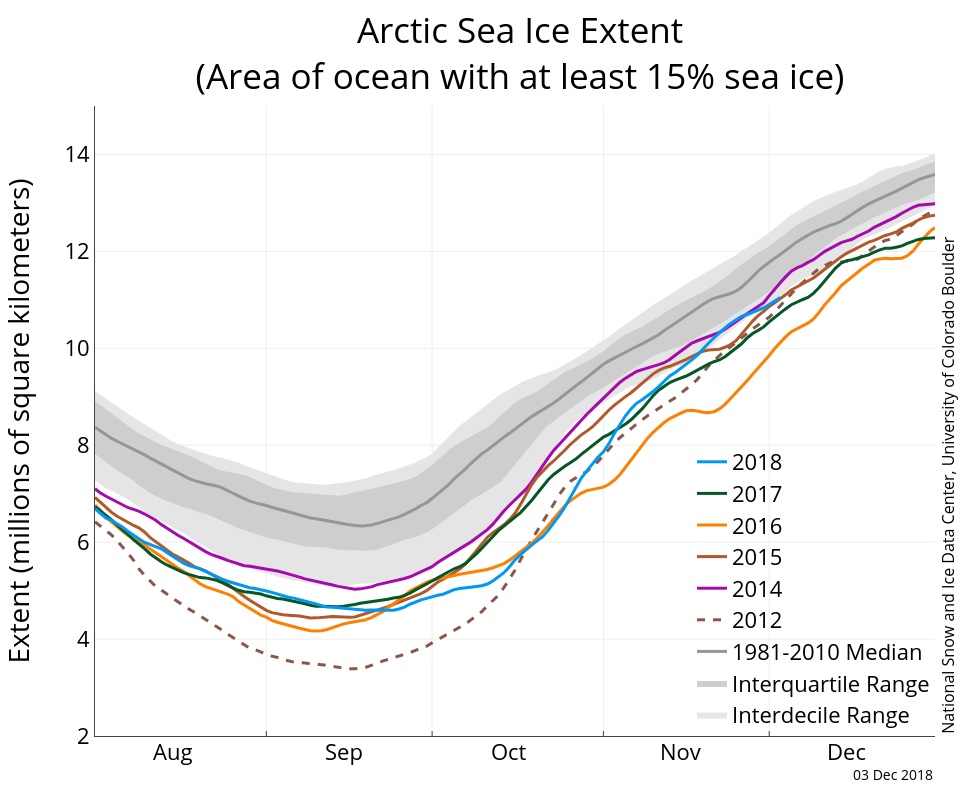 The graph above shows Arctic sea ice extent as of December 03, 2018, along with daily ice extent data for four previous years and the record low year. 2018 is shown in blue, 2017 in green, 2016 in orange, 2015 in brown, 2014 in purple, and 2012 in dotted brown. The 1981 to 2010 median is in dark gray. The gray areas around the median line show the interquartile and interdecile ranges of the data. Sea Ice Index data. Credit: National Snow and Ice Data Center 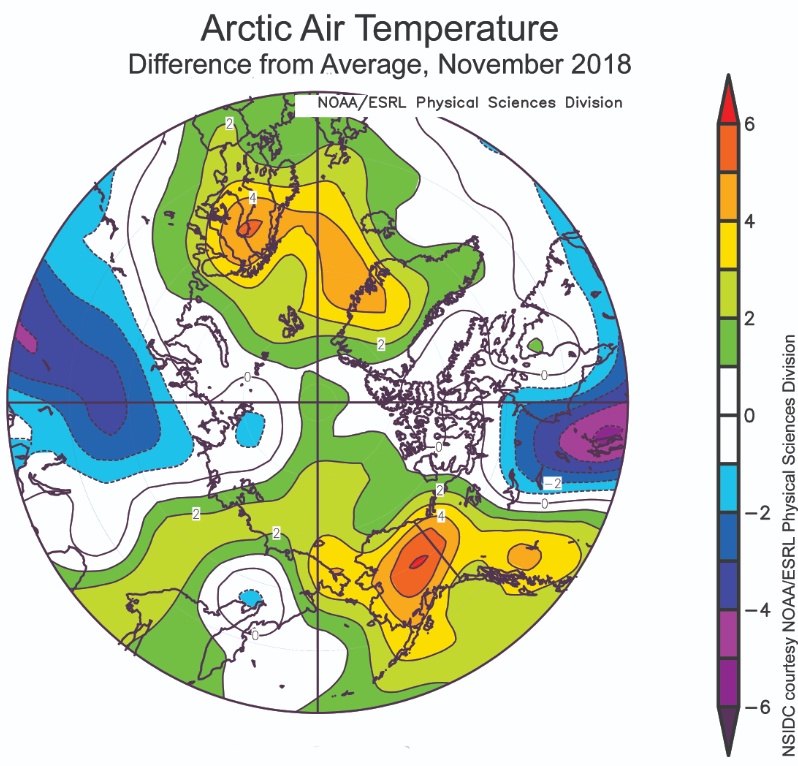