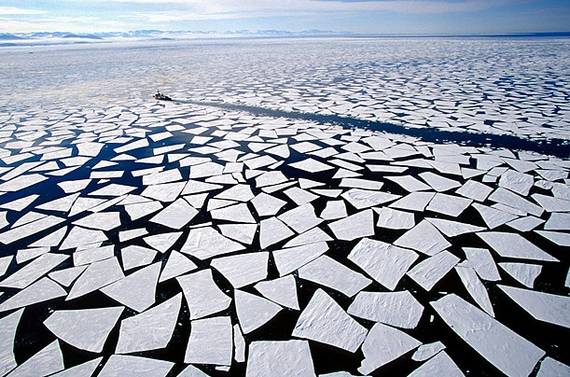 Layers of frozen sea water, known as sea ice, cap the Arctic Ocean. The ice grows dramatically each winter, and melts just as dramatically each summer. In the past decade, the melting has grown more dramatic, while growth has become less so.

The pair of images shows Arctic sea ice concentrations for September 2010 (left) and March 2011. The yellow outline shows the median sea ice extent observed by satellite sensors in September and March from 1979–2000. “Extent” is the total area with an ice concentration of at least 15 percent. The maps were compiled from observations by the Defense Meteorological Satellite Program and by the Advanced Microwave Scanning Radiometer for EOS (AMSR-E), on NASA’s Aqua satellite. The sensors measure microwave energy radiated from Earth’s surface, as sea ice and open water emit microwaves differently. 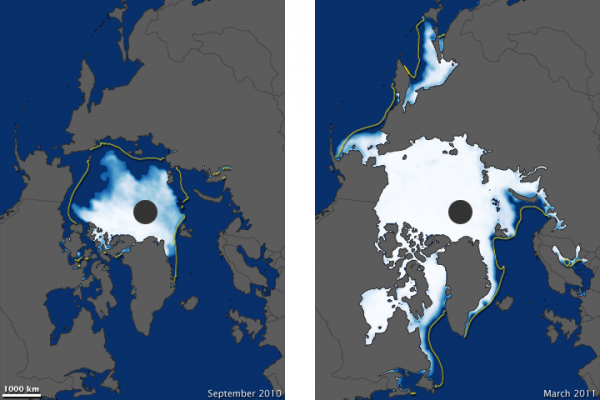 In March 2011, after a winter of growth, sea ice extent in the Arctic was the second lowest for the month of March since satellite records were first kept in 1979. NSIDC reported the overall ice extent at 14.56 million square kilometers (5.62 million square miles) at the maximum on March 7. Concentrations remained below normal in both the Atlantic and Pacific sectors of the Arctic, particularly in the Labrador Sea and the Gulf of St. Lawrence.

New data showed that the amount of older, thicker ice had increased slightly over last year.

“Data through the third week of March shows an increase in sea ice one to two years old, and older than two years old, compared to recent years,” NSIDC noted. “However, the amount of older ice remains much lower than in the mid-1980s, and there is still almost none of the oldest ice (older than four years) that used to dominate much of the Arctic Ocean.”

Including 2011, the March trend in sea ice extent has been decreasing at a rate of 2.7 percent per decade. Visit World of Change: Arctic Sea Ice to see the trend since 1999. 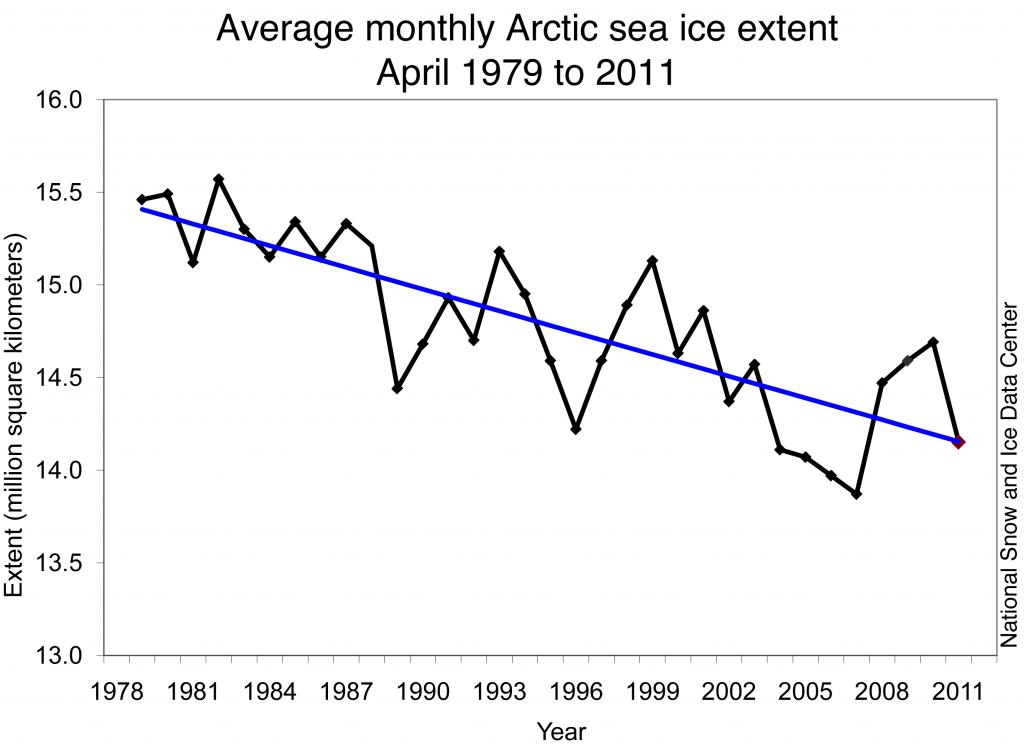 The series of lows, combined with poor wintertime recoveries from 2004 to 2007, marked a sharpening in the rate of decline in Arctic sea ice. Since 2002, ice extent at the summer minimum has not returned to anything approaching the long-term average (1979-2000). Though winter ice extent has fluctuated, satellite and in situ observations have shown that there is less multiyear ice and more annual ice.

In the summer of 2007, Arctic sea ice extent set a record low in early August—more than a month before the end of the melt season. (EO)