The Japan Meteorological Agency reported a bright spot emerging in Himawari-8 imagery it Nishinoshima on July 12. In addition, a brown smoke was seen rising from near the crater around 12:24 JST, July 12.

According to JMA, the surface temperature at Nishinoshima remains unchanged and it seems that lava has not reached the surface. 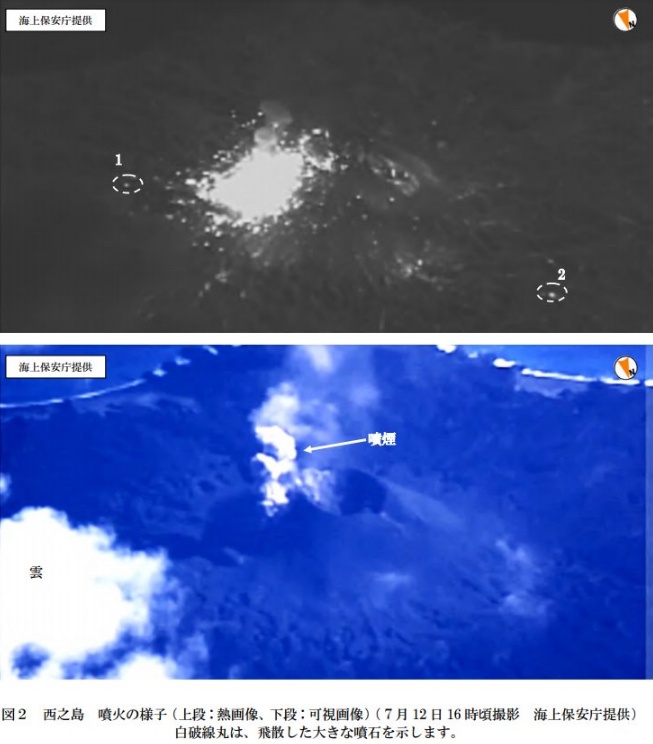 Although this volcano is far from the mainland, the agency warned that volcanic material could reach distances of around 500 m (1 640 feet) from the crater and advised caution.

The last known eruption of this volcano took place in August 2017 (VEI 2).

Another eruption took place on Friday, July 13. It occurred in a crater in the center of the island where officials observed lava flows and large ash deposits up to 500 m (1 640 feet) from the crater.

JMA says it has confirmed via satellites that surface temperatures on Nishinoshima are higher in places, pointing out to continued volcanic activity and the possibility of a larger eruption.

A volcanic alert was issued at 22:00 JST, urging people to stay away from the crater. It has also warned of possible falling rocks and lava flows within 1.5 kilometers (0.93 miles) of the crater.

The coast guard issued a navigation warning in the sea around Nishinoshima on Friday.