NASA's AIM spacecraft has spotted first Noctilucent Clouds (NLCs) of the 2018 northern hemisphere NLC season at the end of May.

And just as they spotted them forming, people on the ground started seeing them, too.

"They are back!" Ruslan Merzlyakov from Denmark wrote under pictures he submitted to Space Weather's Realtime NLC Photo Gallery. "I saw the NLCs during the early hours of May 31."

In the following picture, they are silvery ripples beaming through the orange glow of sunrise: 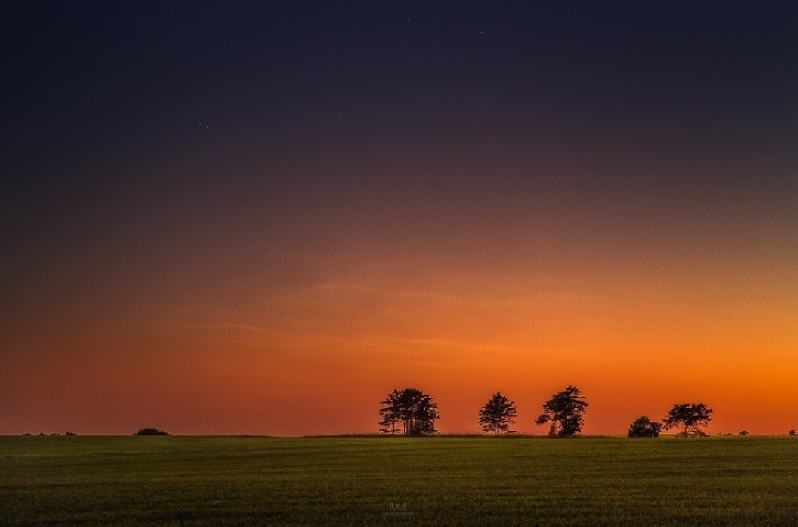 Noctilucent clouds over Denmark on May 31, 2018. Credit: Ruslan Merzlyakov

"I have never seen NLC appearing so much West, as I was always capturing them in the North – North-east," Merzlyakov said. "Andy Stables report from Scotland shows exactly, that the NLC activity is now peaking Northwest from Greenwich latitude."

According to Dr. Tony Phillips of SpaceWeather.com, NLCs are always faint and silvery at the beginning of the season. "They have rippling structure that distinguishes them from ordinary clouds but they may not remain faint for long," he said.

"They turn on every year in late spring, reaching almost full intensity over a period of 5 to 10 days. Soon the silvery ripples Merzlyakov spotted should intensify and spread, forming electric-blue waves that glow deep into the night."

The first known observation of noctilucent clouds dates back to 1885, two years after the 1883 eruption of Krakatoa. At first, they were only seen at higher latitudes, but have recently started appearing ever lower in latitudes. Science still doesn't provide a definite answer why this is happening.

Here is another great NLC timelapse made by Adrien Mauduit during the 2016 NLC season. Adrien gathered his best time-lapse shots and compiled them into this 'little' documentary video on July 8:

After delayed start, magnificent noctilucent clouds are back in full effect (season 2017)