More than 95 000 homes in and around Melbourne, Australia lost power late Sunday afternoon, January 28, 2018, as the state of Victoria endured one of its hottest days of the summer so far. The heat soon turned into biggest January deluge the city has seen since 2004.

Temperatures in Melbourne remained above 30 °C (86 °F) until 16:00 local time Sunday, in some places reaching 40 °C (104 °F), causing a huge spike in power demand. The electrical grid soon failed, apparently after the spike blew fuses, leaving more than 95 000 customers without power. Tens of thousands were still in darkness Monday afternoon.

Andrew Dillon from Energy Networks Australia told ABC Radio Melbourne the statewide system held up under the strain of demand, but local networks were overwhelmed. He said all five energy distributors across Victoria experienced outages after about 500 distribution fuses were overloaded.

Victorian Minister for Energy Lilly D'Ambrosio said the state had plenty of energy in reserves. "What went wrong was a massive failure across the energy infrastructure."

The cool change brought plenty of rainfall overnight Tuesday, between 20 and 50 mm (0.78 – 1.96 inches) at most locations and most of it over north-central and central districts. 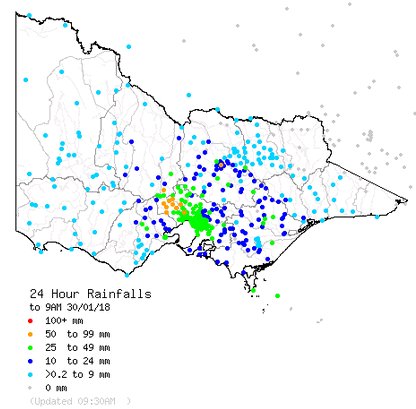 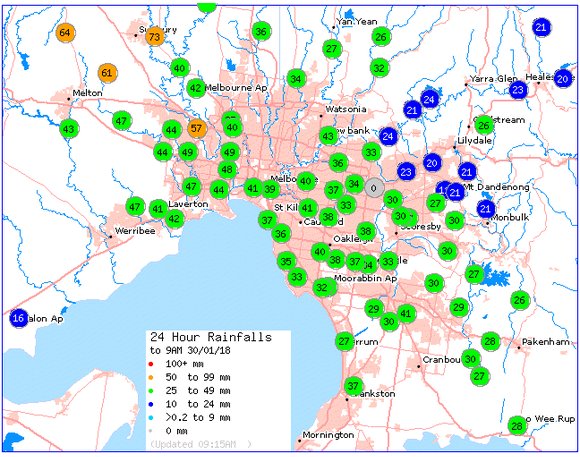 While this is nowhere near to what fell over Sunbury, it was 80% of Melbourne's total rainfall for the month of January.