When mere seconds of storm warning could mean the difference between harm or safety, two researchers with Western University ties have developed a tornado-prediction method they say could buy as much as 20 minutes more warning time.

These radar-based calculations can forecast a tornado, with 90% accuracy within a 100-kilometer radius, say Anna Hocking, a Western alumna and PhD, and Prof. Wayne Hocking, who leads the Atmospheric Dynamics Group based at Western’s Department of Physics and Astronomy in the Faculty of Science. 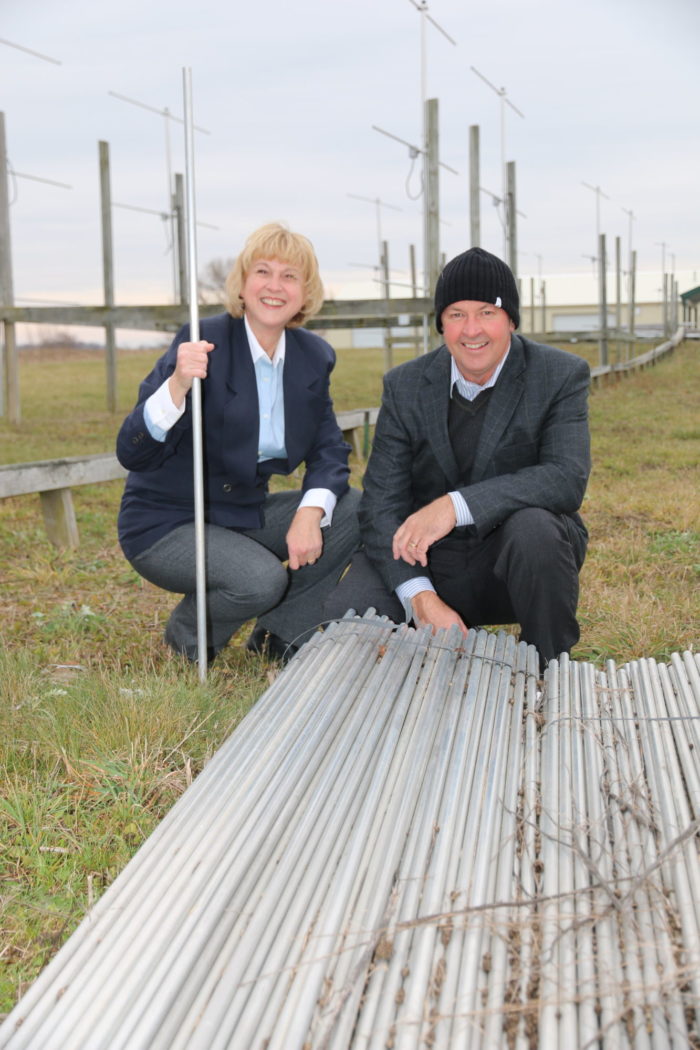 ​
An analysis of tornado signatures from the past 16 years — including data from the Ontario-Quebec VHF Windprofiler Radar Network — could mean faster, more accurate tornado prediction. Pictured here with antenna elements at the radar array north of London: researchers Anna Hocking, a Western University alumna and PhD, and Prof. Wayne Hocking, who leads the Atmospheric Dynamics Group based at Western’s Department of Physics and Astronomy. Photo: Debora Van Brenk, Western University

They have authored a paper entitled "Tornado Identification and Forewarning with VHF Windprofiler Radars," published in Atmospheric Science Letters, a journal of the Royal Meteorological Society.

"Typically, meteorologists look for specific signatures that include wind speeds plus an overshoot, a dome-like knob that forms atop a thundercloud," said Anna Hocking. "What we’ve been able to do, for the first time, is add in and quantify a third factor: turbulence."

The pair use a unique Ontario-Quebec network of purpose-built radars that measure wind and turbulence through the upper atmosphere, troposphere and lower stratosphere. The O-QNet of 10 radar arrays (including one just north of London) was built in part with funding from the Canadian Foundation for Innovation, as well as NSERC and ECCC (Environment and Climate Change Canada. The network also involves collaboration with researchers at York University and McGill University.

"Because this network is so large and is designed to measure turbulence as well as winds, we’ve been able to see patterns, predictors, that haven’t been evident before," said Wayne Hocking, who is also a Fellow of the Royal Society of Canada.

The Hockings collected and analyzed 16 years of tornado data, including reports to Environment Canada from citizen observers, and correlated that with real-time and archived data from these radar arrays.

Of the 31 documented tornadoes, specific profiles of cloud overshoot into the stratosphere, wind velocity and turbulence were uniquely present 90% of the time — with all three signature features evident 10 to 20 minutes before the tornado formed. There was less than a 15% likelihood of false detection, Wayne Hocking said.

That’s a significant improvement over existing predictions, with warnings that often cover huge regions and can produce false alarms.

Accurate, timely and geographically precise tornado warnings have long been a holy grail among meteorologists. Sometimes, proprietary technologies and differing methodologies among forecasters have proven a barrier to deciphering weather patterns.

"There’s still a lot to be done and we’re not going to say this is going to solve the whole forecasting problem — but this is a large step in the right direction," Wayne Hocking said. "The data suggests we now have a more reliable tool for forecasting than has been possible before this."

Provided by University of Western Ontario