A new study, led by a University of Bristol earth scientist, has shown that recently reported unexpected behavior on Titan, the largest moon of Saturn, is due to its unique atmospheric chemistry.

Titan’s polar atmosphere recently experienced unexpected and significant cooling, contrary to all model predictions and differing from the behavior of all other terrestrial planets in our solar system.

Titan is the largest moon of Saturn, is bigger than the planet Mercury, and is the only moon in our solar system to have a substantial atmosphere.

Usually, the high altitude polar atmosphere in a planet’s winter hemisphere is warm because of sinking air being compressed and heated – similar to what happens in a bicycle pump. 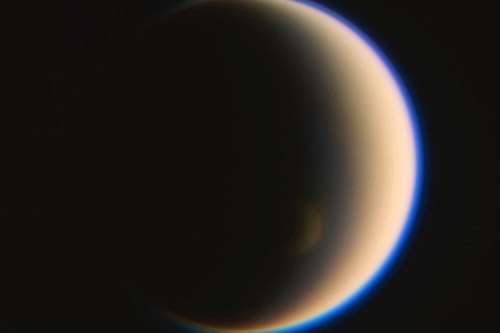 Titan’s winter polar vortex imaged by the Cassini Spacecraft’s ISS camera. The vortex is now in deep winter and can only be seen because the polar clouds within the vortex extend high above Titan’s surface into the sunlight. The vortex was extremely cold from 2012-2015 giving rise to unusual nitrile ice clouds. Image Credit: NASA/JPL-Caltech/Space Science Institute/Jason Major

The Cassini/CIRS observations showed that while the excepted polar hot spot did begin to develop at the start of winter in 2009, this soon developed into a cold spot in 2012, with temperatures as low as -153.15°C (-243.67°F) being observed until late 2015.

Only in the most recent 2016 and 2017 observations has the expected hot-spot returned.

Lead author Dr Nick Teanby from the University of Bristol’s School of Earth Sciences, said: "For the Earth, Venus, and Mars, the main atmospheric cooling mechanism is infrared radiation emitted by the trace gas CO2 and because CO2 has a long atmospheric lifetime it is well mixed at all atmospheric levels and is hardly affected by atmospheric circulation.

"However, on Titan, exotic photochemical reactions in the atmosphere produce hydrocarbons such as ethane and acetylene, and nitriles including hydrogen cyanide and cyanoacetylene, which provide the bulk of the cooling."

These gases are produced high in the atmosphere, so have a steep vertical gradient, meaning that their abundances can be significantly modified by even modest vertical atmospheric circulations.

Researchers used the temperature and gas abundances measured with Cassini, coupled with a numerical radiative balance model of heating and cool rates, to show that trace gas enrichment was large enough to cause significant cooling and extremely cold atmospheric temperatures.

This explains earlier observations of strange hydrogen cyanide ice clouds that were observed over the pole in 2014 with Cassini’s cameras.

"This effect is so far unique in the solar system and is only possible because of Titan’s exotic atmospheric chemistry," Teanby added.

"A similar effect could also be occurring in many exoplanet atmospheres having implications for cloud formation and atmospheric dynamics."

Provided by University of Bristol

Featured image: Titan’s winter polar vortex imaged by the Cassini Spacecraft’s ISS camera. The vortex is now in deep winter and can only be seen because the polar clouds within the vortex extend high above Titan’s surface into the sunlight. The vortex was extremely cold from 2012-2015 giving rise to unusual nitrile ice clouds. Image Credit: NASA/JPL-Caltech/Space Science Institute/Jason Major