A tsunami that struck Hawaii in 2011 and caused a temporary halt to boat traffic has provided scientists a rare glimpse into what the bays might sound like without human activities.

The tsunami, triggered by the same earthquake that caused the Fukushima nuclear disaster in Japan, reached waters along the island of Hawaii's Kona Coast while a Duke University-led team was recording underwater sound in four bays there.

"On the tsunami day, underwater sound levels during the loudest part of the day measured 98.8 decibels (re 1 uPa). On days when human activities in and near the bays weren't halted, we recorded sound pulses more than 16 times louder than that," said Heather L. Heenehan, a postdoctoral scientist at NOAA's Northeast Fisheries Science Center, who led the study as part of her doctoral dissertation at Duke's Nicholas School of the Environment.

Because sound waves travel and are amplified differently in water than in air, scientists use the reference "(re 1 uPa)" to express the relative loudness of sounds recorded underwater. 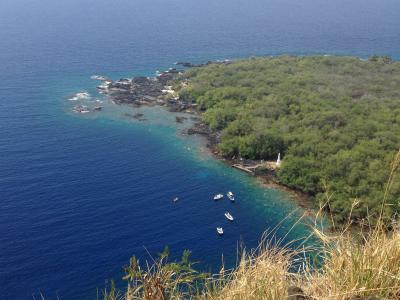 One of Hawaii's many tourist attractions is the opportunity to see and interact with spinner dolphins, but we're noisy about it, bothering the marine mammals. Credit: Duke University

Using passive acoustic recorders, Heenehan and her colleagues measured and identified the sources of sound pollution in four shallow bays along the Kona Coast that are home to populations of spinner dolphins, a major eco-tourism draw. Conservationists have long feared that interactions caused by dolphin-encounter boat tours and other human activities disrupt the sleeping behaviors of the dolphins, who rest in the bays during the day to gain energy to hunt for food in offshore waters at night.

The new study validated these concerns by showing that humans create the loudest disruptions in each of the four bays. Boat traffic and sonar were significant causes of noise in all four bays. Sounds from boats involved in recreational activities in the bays and nearby fish farms also contributed to the daytime din to varying degrees.

Because different combinations of human noises affected each bay's soundscape differently, policy solutions will have to be tailored to individual situations, said David W. Johnston, a co-author on the study and associate professor of the practice of marine conservation ecology at Duke's Nicholas School.

"No one-size-fits-all approach will work," he said.

The new tsunami-enabled benchmark of what the bays sound like without human disruptions gives policymakers, conservationists, and local communities an aspirational target to aim for when implementing future measures to reduce underwater sound levels, Heenehan said.

"This shows just how much human activities interrupt the acoustic environment of these animals at a critical resting time," she said.