USGS seismologists have detected deep long-period earthquakes beneath the dormant Mauna Kea volcano in Hawaii at depths of about 20 to 25 km (12 to 15 miles) occurring with surprising regularity every 7 to 12 minutes. While low-frequency earthquakes are not unusual, there are no other instances of this kind of repetition anywhere in the world. Essentially, more than one million quakes were recorded from 1999 to 2018. Adding together the energy release of the tremors gives a total that is equivalent to an M3.0 earthquake under Mauna Kea every day.

Several years ago, USGS seismologists tried a new method to detect seismicity at Kilauea Volcano, and out of curiosity, they looked at the rest of the island to see what else they might discover. To their surprise, the scientists found deep earthquakes beneath Mauna Kea– a volcano that has not erupted in over 4 500 years.

The recurring quakes occur directly beneath the volcano's summit every 7 to 12 minutes. In addition, the repeating events can be detected back to 1999 when a particularly quiet seismic station was installed in the saddle between Mauna Kea and Mauna Loa.

USGS said chances are high that the repeating quakes were happening even further back. Initially, seismologists were cautious to interpret the termors as due to volcanic processes, because the regularity seemed man-made.

It took them a long period of examination to lay down all probabilities, like the activities at the Pohakuloa Training Area, or road construction. Eventually, it became evident that these quakes were indicating something significant about Mauna Kea. 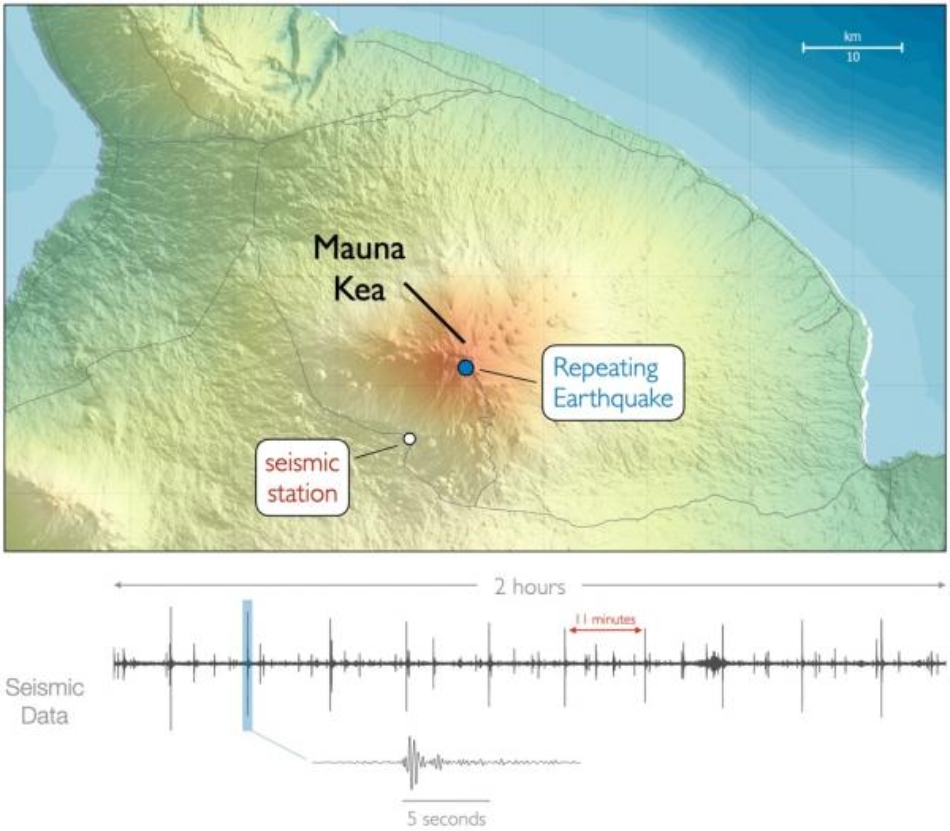 One hint to the origin of the deep, repeating earthquakes is that their seismic waves or waveforms appear different from those of regular earthquakes. Where ordinary generate more high-frequency tremblor, the Mauna Kea events are more drawn out, containing lower frequencies. This shows that regular slip on a fault is not the reason for the deep Mauna Kea events.

While low-frequency earthquakes are not unusual, there are no other instances of this kind of repetition anywhere in the world. Essentially, more than one million quakes were recorded from 1999 to 2018. Adding together the energy release of the tremors gives a total that is equivalent to an M3.0 earthquake under Mauna Kea every day.

According to USGS, to get earthquakes every seven to 12 minutes for decades, it requires an almost constant supply of fluids, and the source is possible magmatic gases that act like fluids when they are deep within the Earth's crust. As the magma cools, the gases separate. Huge magma bodies cool over up to thousands of years, so the process provides a long-term, almost continuous supply of fluids to drive deep earthquakes repeatedly beneath Mauna Kea.

"Under this interpretation, the fluids are produced from magma cooling in place. There is no evidence (from this study or other work) that magma is rising under Mauna Kea. So while this study provides important insight into processes beneath the volcano, it does not change estimates of volcanic hazard at Mauna Kea," USGS wrote.

"We expect any opening of a new conduit will be accompanied by swarms of shallow earthquakes to provide advanced warning of impending eruptive activity."

Deep long-period earthquakes (DLPs) are an enigmatic type of volcanic seismicity that sometimes precedes eruptions but mostly occurs at quiescent volcanoes. These earthquakes are depleted in high-frequency content and typically occur near the base of the crust. We observed a near-periodic, long-lived sequence of more than one million DLPs in the past 19 years beneath the dormant postshield Mauna Kea volcano in Hawaiʻi. We argue that this DLP sequence was caused by repeated pressurization of volatiles exsolved through crystallization of cooling magma stalled beneath the crust. This “second boiling” of magma is a well-known process but has not previously been linked to DLP activity. Our observations suggest that, rather than portending eruptions, global DLP activity may more commonly be indicative of stagnant, cooling magma.