Scientists from the University of Miami (UM) Rosenstiel School of Marine and Atmospheric Science have shed light on the hazards of Hawaii's Mauna Loa, the largest active volcano on Earth, finding that a large earthquake could set off an eruption. The team studied ground movements measured by Interferometric Synthetic Aperture Radar (InSAR) satellite data and GPS stations to get a precise model of where magma intruded and how magma changed over time, as well as where faults moved under the flanks, without generating earthquakes.

"An earthquake of magnitude-6 or greater would relieve the stress imparted by the influx of magma along a sub-horizontal fault under the western flank of the volcano," explained lead author the new study, Bhuvan Varugu, a Ph.D. candidate at the UM Rosenstiel School.

"This earthquake could trigger an eruption."

In 2015, the magma began expanding southward, where the topographic elevation is lower and the magma had less work against the pressure. After the magma flux diminished in 2017, the inflation center returned to its previous position. Such changes of a magma body have never been observed in the past.

"At Mauna Loa, flank motion and eruptions are inherently related," said Varugu. "The influx of new magma started in 2014 after more than four years of seaward motion of the eastern flank — which opened up space in the rift zone for the magma to intrude." 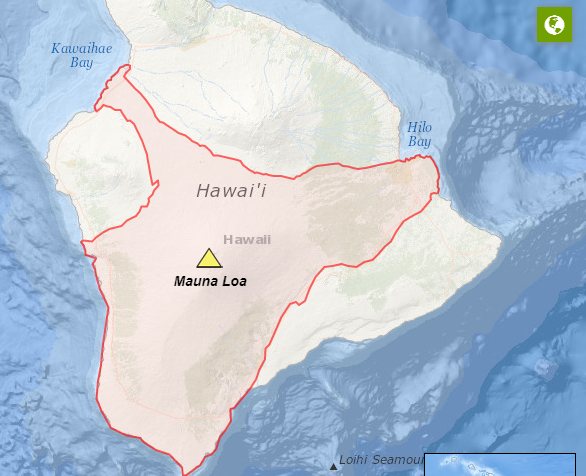 "If magma influx continues it is likely, but not required," Varugu said, talking about the possibility of the volcano erupting in the future. "The topographic load is pretty heavy, the magma could also propagate laterally through the rift zone."

"An earthquake could be a game-changer," remarked Falk Amelung, senior author of the study and a professor at the UM Rosenstiel's School's Department of Marine Geosciences.

"It would release gases from the magma comparable to shaking a soda bottle, generating additional pressure and buoyancy, sufficient to break the rock above the magma."

"It is a fascinating problem," Amelung noted, saying there are many uncertainties regarding the eruption. Though the stress that was exerted along the fault is known, the magnitude will depend on the size of the fault patch that will rupture. In addition, there are no satellite data available to identify the movements before 2002.

"We can explain how and why the magma body changed during the past six years. We will continue observing and this will eventually lead to better models to forecast the next eruption site."

In the 1950 eruption of Mauna Loa, it only took three hours for the lava to reach the Kona coast. Such rapid flows would only give residents along the path very little time to evacuate.

Space-geodetic observations of a new period of inflation at Mauna Loa volcano, Hawaii, recorded an influx of 0.11 km3 of new magma into its dike-like magma body during 2014–2020. The intrusion started after at least 4 years of decollement slip under the eastern flank creating > 0.15 MPa opening stresses in the rift zone favorable for magma intrusion. Volcanoes commonly respond to magma pressure increase with the injection of a dike, but Mauna Loa responded with lateral growth of its magma body in the direction of decreasing topographic stress. In 2017, deformation migrated back, and inflation continued at the pre-2015 location. Geodetic inversions reveal a 8 × 8.5, 10 × 3 and 9 × 4 km2 dike-like magma body during the 2014–2015, 2015–2018 and 2018–2020 periods, respectively, and an average decollement slip of ~ 23 cm/year along a 10 × 5 km2 fault. The evolution of the dike-like magma body including the reduction in vertical extent is consistent with a slowly ascending dike propagating laterally when encountering a stress barrier and freezing its tip when magma influx waned. Overall, the magma body widened about 4.5 m during 2002–2020.