In a new study, the scientists from the University of Hawai'i at Mãnoa (UHM) have calculated a 9% chance that an M9.0+ earthquake will occur in the Aleutian Islands over the next 50 years. An event of such force would affect over 300 000 people and be capable of creating a mega-tsunami that could threaten Hawai'i. Economic losses from such event would be almost $40 billion.

When two sections of Earth's crust suddenly slip past one another, an earthquake happens. The slip area is called the fault,  and the system of faults comprises a subduction zone. If the earthquake took place in the subduction zone of the Aleutian Islands, the region of Hawai'i would be particularly endangered.

"Necessity is the mother of invention. Having no recorded history of mega-tsunamis in Hawai'i, and given the tsunami threat to Hawai'i, we devised a model for Magnitude 9 earthquake rates following upon the insightful work of David Burbidge and others," said Rhett Butler, lead author and geophysicist at the UHM School of Ocean and Earth Science and Technology (SOEST). 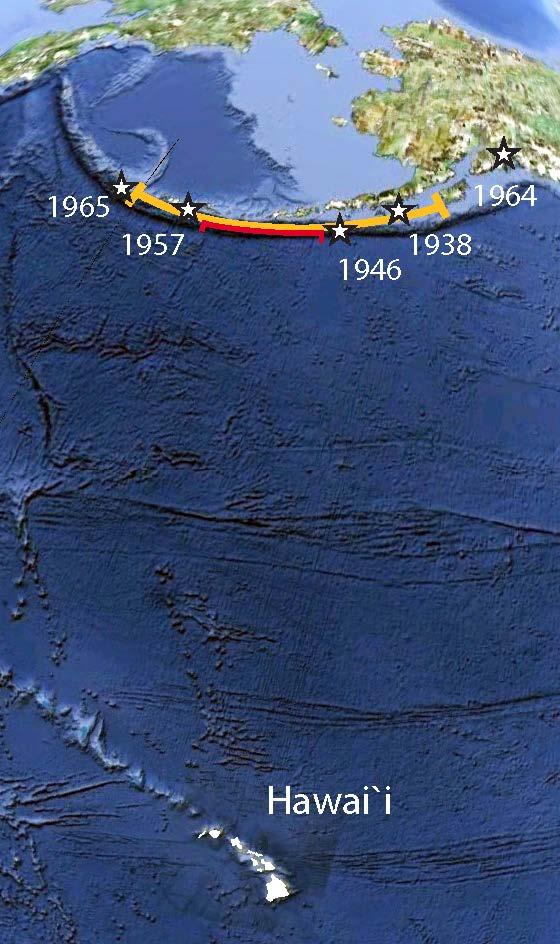 The Aleutians in respect to Hawai'i. The red and yellow arcs indicate the sections of the Aleutian subduction zones considered in the probability analysis. Stars and dates indicate epicenters of prior 20th century great earthquakes (Mw > 8). Image credit: Butler et al., 2016

A group of researchers has developed a numerical model based on the fault length and plate convergence rate. To test the model they've used the historical seismic/tsunami records related to the five largest earthquakes that occurred since 1900: the Tohoku record of 2011, Sumatra-Andaman 2004, Alaska 1964, Chile 1960 and Kamchatka 1952.

"These five events represent half of the seismic energy that has been released globally since 1900. The events differed in details, but all of them generated great tsunamis that caused enormous destruction," explained Butler.

The scientists have also taken into the account the tsunamis that preceded the recorded history, the traces of which had been preserved in the coastal sediment layers, volcanic tephras, and archeological sites.

"We were surprised and pleased to see how well the model actually fit the paleotsunami data," said Butler. 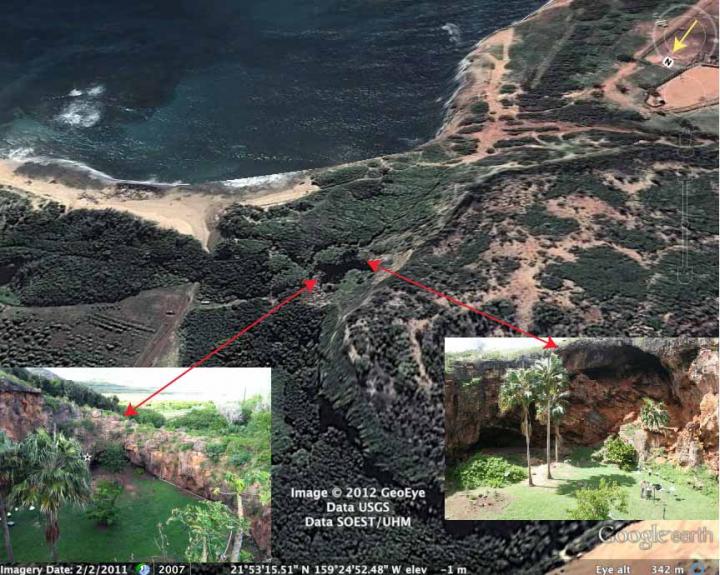 The only well-documented paleotsunami deposit in Hawai'i from the 16th century is on Kaua`i. The Makauwahi sinkhole, on the side of a hardened sand dune, is viewed toward the southeast from an apparent altitude of 342 m (1 122 feet). Inset photos show two of the wall edges, indicating the edges of the sinkhole. The east wall (left) is 7.2 m (23.6 feet) above mean sea level, and about 100 m (328 feet) from the ocean. Note for scale the people in the right image. Image credit: R. Butler (left), Gerard Fryer (right), GoogleMaps (background). Figure from Butler et al., 2014.

Using the probability of occurrence, the researchers were able to annualize the risk. According to the study, the chance of an M9.0 earthquake in the greater Aleutians is 9% ± 3% in the next 50 years. When annualized, this risk has been estimated at about $72 million per year. Considering a worst-case location for Hawai'i limited to the Eastern Aleutian Islands, the chances are about 3.5% in the next 50 years, or about $30 million annualized risk. In making decisions regarding mitigation against this $30-$72 million risk, the state can now prioritize this hazard with other threats and needs.

The researchers are now considering the possibility of applying their technique earthquakes of magnitudes between 7 and 8, around the Pacific area.

Featured image: The Aleutians in respect to Hawai'i. The red and yellow arcs indicate the sections of the Aleutian subduction zones considered in the probability analysis. Stars and dates indicate epicenters of prior 20th century great earthquakes (Mw > 8). Image credit: Butler et al., 2016