Two strong eruptions were recorded at Russia's Sheveluch volcano over the past 24 hours. The first one, registered at 20:30 UTC on September 7, sent ash up to 8.2 km (27 000 feet) above sea level, while the second, registered at 10:30 UTC today, sent ash up to 8.5 km (28 000 feet), according to the Tokyo VAAC. Following an eruption at 21:46 UTC on September 7, KVERT raised the Aviation Color Code for nearby Klyuchevskoy volcano from Yellow to Orange.

Ash produced during both eruptions at Sheveluch drifted to the northeast. The explosive-extrusive eruption of the volcano continues, KVERT reported, adding that the Aviation Color Code remains Orange.

The last time this volcano experienced a powerful eruption was on August 9, 2017, when ash cloud reached an altitude of 12.2 km (40 000 feet) above sea level and drifted SSE. 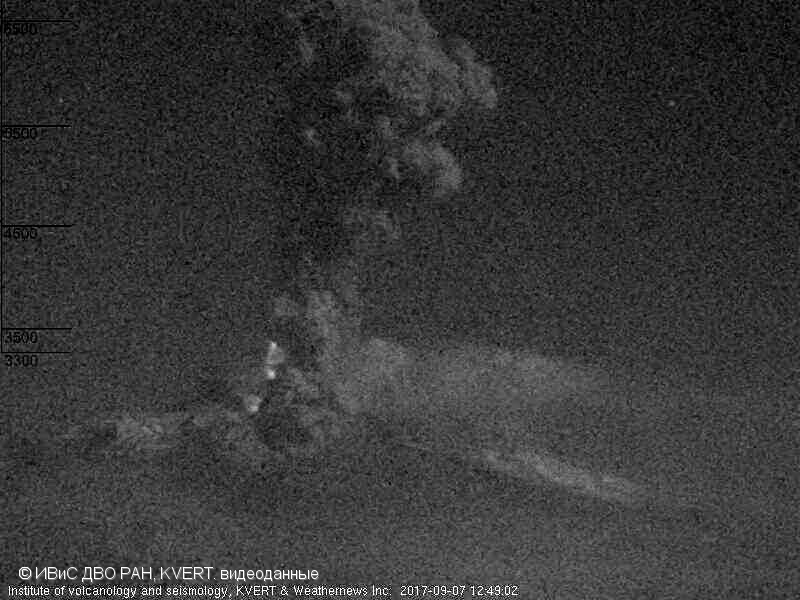 The Aviation Color Code for nearby Klyuchevskoy volcano was raised from Yellow to Orange, KVERT reported at 22:13 UTC on September 7, after a strong eruption at 21:46 UTC sent ash up to 7 km (23 000 feet) a.s.l. Volcanic ash drifted to the northeast and was observed until 05:20 UTC on September 8.

Klyuchevskoy (also spelled Kliuchevskoi) is Kamchatka's highest and most active volcano. Since its origin about 6000 years ago, the beautifully symmetrical, 4835-m-high (15 862 feet) basaltic stratovolcano has produced frequent moderate-volume explosive and effusive eruptions without major periods of inactivity. It rises above a saddle NE of sharp-peaked Kamen volcano and lies SE of the broad Ushkovsky massif.

More than 100 flank eruptions have occurred during the past roughly 3000 years, with most lateral craters and cones occurring along radial fissures between the unconfined NE-to-SE flanks of the conical volcano between 500 m and 3 600 m (1 640 – 11 811 feet) elevation.