Megi marched into Taiwan with maximum sustained winds near the center of 213 km/h (132 mph) and gusts to 259 km/h (161 mph), this made it a Category 4 hurricane equivalent on the Saffir-Simpson Hurricane Wind Scale.

First reports mention 38 people injured and a lot of downed trees and power lines. Over 1.3 million homes were without power at some point today, the Taiwan Power Company said.

Almost every city and county have reported power outages, Focus Taiwan reported. After emergency repairs, about 1.01 million homes were still facing power outages, with 270 000 of them in the central city of Taichung, after the storm made landfall. About 110 000 homes in neighboring Changhua County and 93 000 homes in the central Taiwan county of Yunlin were without power.

Just after 06:00 UTC (14:00 CST), the Taipei Water Department urged people to 'store water as early as possible because the turbidity of the city's water sources has risen under the influence of a powerful typhoon' and the company will no longer draw water to treat and supply to customers. The department provides water to 3.94 million people in Taipei and parts of neighboring New Taipei. 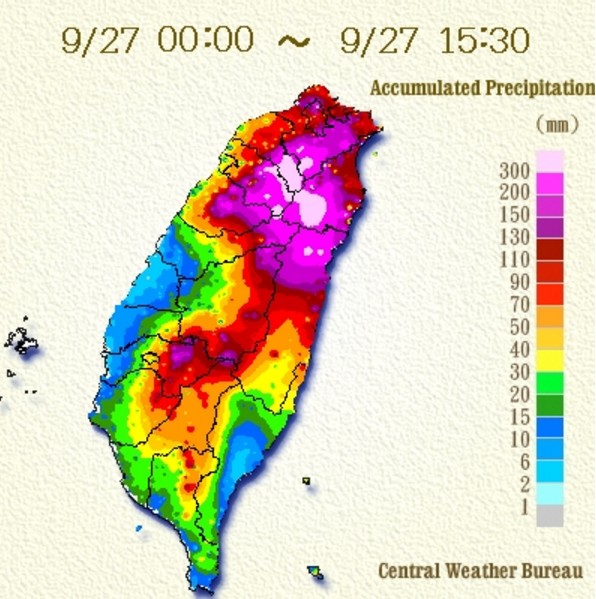 Megi is forecast to continue tracking west-northwestward, cross the Taiwan Strait and make a final landfall in eastern China around 00:00 UTC on September 28 near the city of Quanzhou, Fujian Province.

According to latest figures from Taiwan's Central Emergency Operations Center, at least 4 people have lost their lives. Three people suffered fatal falls and a fourth person died in a truck crash. More than 527 were injured, many from falling and windblown objects. At least one is in critical condition.