Nock-Ten, known as Nina in the Philippines, intensified into a supertyphoon on December 24, 2016, a day before its deadly strike on the Philippines. Reports received early Tuesday, December 27 (UTC), say at least 7 people died as the typhoon rolled over the country. Nock-Ten is the strongest typhoon on record (since 1945) to make landfall in the Philippines this late in the calendar year.

Robert Speta of the WestPacWx said many people in the Philippines 'were just not paying attention to the news or if they were, then they were just straight up ignoring it and going on with Christmas plans.'

"But what took place ahead of it may have saved hundreds of lives… mass forced evacuations by people actually going to low-lying communities and forcing people to get out ahead of the storm. This is fantastic news and truly represents the scope of change since Typhoon 'Haiyan' just 4 years ago," he said.

Speta added that the worst hit areas of Camarines Sur seen about 60% of the local infrastructure destroyed with most of the area losing power. Another good news is that the storm tracked further south, missing the highly populated city of Manila out of the worst of the storm. "I am sure attitude this morning on this storm would be vastly different if it had actually rolled over that metro with 9 million plus people," he concluded.

Three people, including an elderly couple, drown in floods while a woman was crushed by a collapsed wall in Albay. Two people died after they were hit by debris in Mulanay town, Quezon province. A passenger vessel sank as it sought shelter from rough waves off Mabini, Batangas, leaving a crew member dead and 18 others missing.

Nock-Ten made 8 landfalls over the Philippines bringing strong wind and heavy rain. At the time of the first landfall, Nock-Ten had maximum sustained winds of 249 km/h (155 mph). This is the equivalent of a Category 4 hurricane on the Saffir-Simpson Hurricane Wind Scale.

The hardest hit was Catanduanes Island, one of the easternmost islands of the northern Philippines. Nock-Ten's eye then tracked over the provinces of Albay, Camarines Sur, Quezon, Marinduque, Oriental Mindoro, Occidental Mindoro and Batangas.

According to meteorologist Phil Klotzbach of the CSU, with winds of 249 km/h, Nock-Ten was the strongest Christmas Day tropical cyclone anywhere on the globe dating back to 1960. It is also the strongest Philippines landfall so late in the year on record, since 1945.

Nock-Ten has also generated the most Accumulated Cyclone Energy for a NW Pacific typhoon forming this late in the season since Jack of 1989.

Supertyphoon #Nockten is the strongest typhoon on record (since 1945) to make landfall in the #Philippines this late in the calendar year. pic.twitter.com/jUzIUOg8hk

Typhoon #Nockten has now generated the most ACE for a NW Pacific typhoon forming this late in the season since Jack (1989). pic.twitter.com/4t7OVVBb8R

According to the National Disaster Risk Reduction and Management Council (NDRRMC) situation report No. 6 issued 08:00 local time on December 27, a total of 87 059 families or 429 485 people were pre-emptively evacuated in Regions Calabarzon, Mimaropa, V and VIII where 25 959 families or 111 634 persons are affected.

Two flooding incidents and one maritime incident in Calabarzon and Mimmaropa were observed. A total of 13 road sections and 3 bridges are not passable due to fallen trees and debris in Region II, Mimmaropa, V and VIII. The typhoon has also caused power outage in 114 areas in regions Calabarzon, Mimmaropa and V. 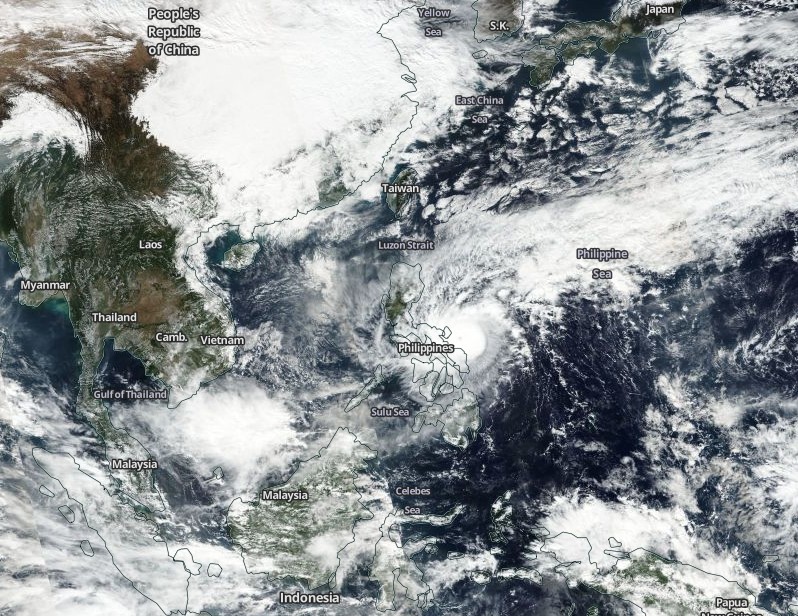 "The National Response Cluster conducted a regular meeting to coordinate the response effort. In addition to the provision of relief assistance funds, the government is also transporting food and non-food items by land to Laguna and Batangas and by air to Catanduanes," ASEAN said.

There is no currently no request for international assistance.

At of 03:00 UTC on December 27, Nock-Ten is a tropical storm located approximately 496 km (308 miles) west of Manila, and has tracked WNW at 20 km/h (12.6 mph) over the past 6 hours, JTWC said. The first few frames of multispectral imagery reveal a ragged and asymmetric central dense overcast over a lov level circulation center that is becoming partially exposed. Its current intensity is 111 km/h (69 mph). 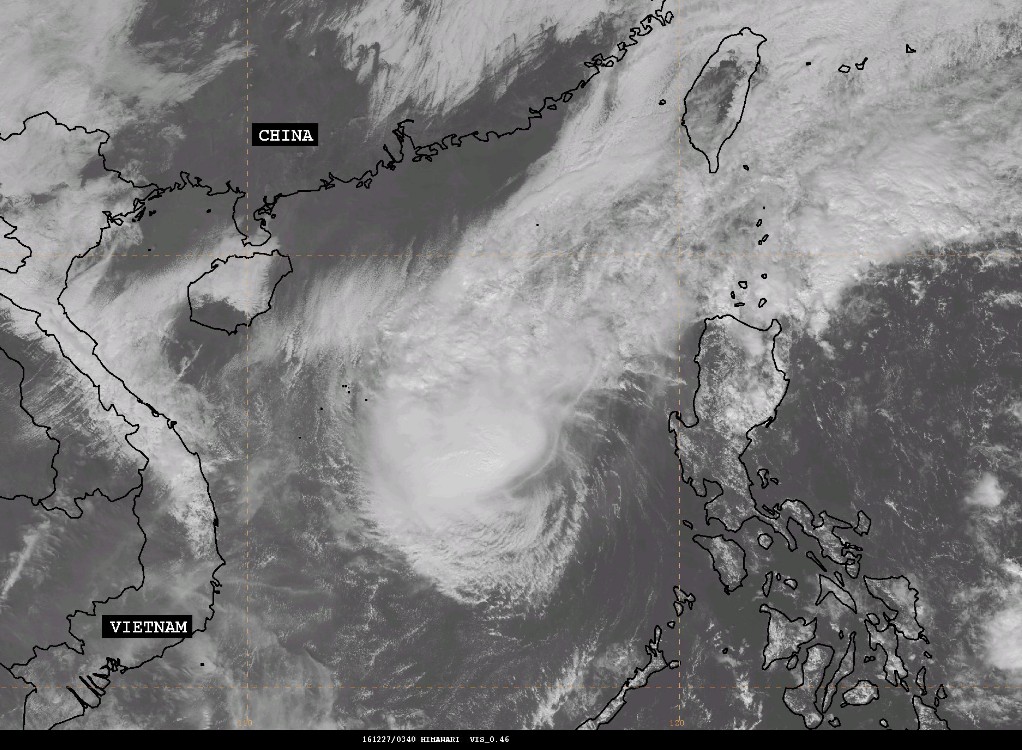 "Over the next 12 hours, Nock-Ten will turn westward to the SW in response to the surge flow in the South China Sea," the center said. As a result of the convective decoupling and the cool, dry air associated with the surge, the low level circulation center is forecast to dissipated by 15:00 UTC on December 28.