A massive Christmas storm, described by the Australian Bureau of Meteorology (BOM) as a twice-a-century weather event, brought a record amount of rainfall to the Northern Territory, causing flash floods, evacuations and the closure of Australia's famous national park at Uluru. At least 6 people are still considered missing.

A low-pressure trough came through Kimberley across the south-western parts of the Northern Territory, and it maintained its tropical nature as it came down through the interior of Western Australia, bringing unusually heavy rainfall to normally arid part of central Australia over the Christmas weekend.

"Basically, when these tropical lows move inland they can drop incredible amounts of water, and that's what we've seen down through the desert regions of Central Australia. It just maintained its structure when it moved inland," BOM's senior forecaster for Northern Territory, Sally Cutter, said.

232 mm (9.1 inches) of rain fell in Kintore, Northern Territory, in less than 24 hours on December 25, which is more than five times their monthly average.

Kintore, a small town with less 500 people, was evacuated as flood waters as high as 1 m (3.3 feet) inundated their homes. Town's weather stations recorded a total of 373.4 mm (14.7 inches) of rain this month, which is a new monthly record, BOM said.

"Heavy falls are so rare in this area, there are only a few rain gauges to measure it," Cutter said.

A number of other records have also been set over the past two days.

Showers & storms across much of the #NT today with a deep low crossing the far SW. #SevereWeather #Warning at https://t.co/Y3ODTyPbij pic.twitter.com/8FyC8tTDmQ

Kintore, located some 520 km (323 miles) from the closest city of Alice Springs, was almost cut off, with only severely impaired access from the Western Australian side. Local authorities estimated that around 40% of all homes in the town were damaged by the flood in some way.

Papunya, another town 250 km (155 miles) from Alice Springs, was completely cut off, while the town square of Yulara, the nearest community to Uluru, was inundated. 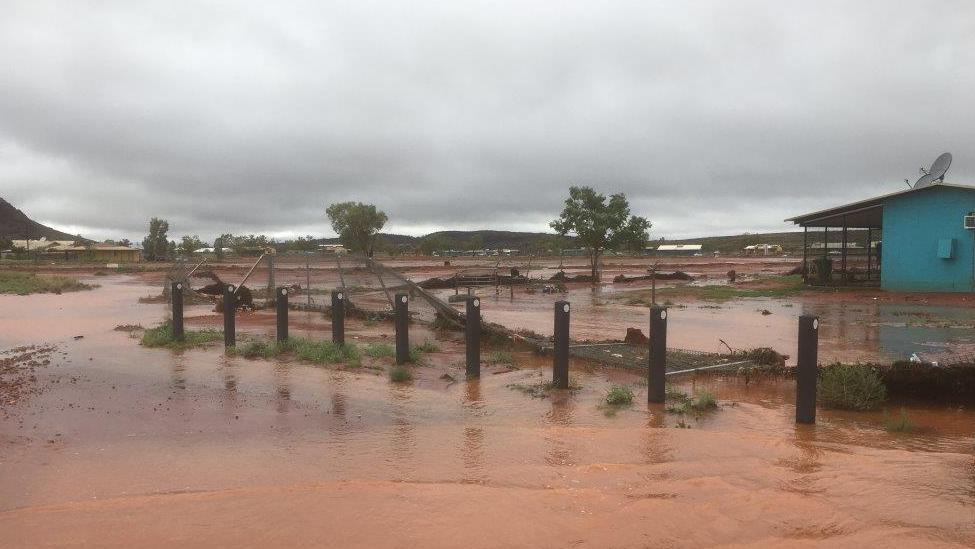 While three people trapped in a car which washed off a causeway at the flooded Hugh River near Alice Springs were found alive with only minor injuries, five adults and a baby are still missing two days after they left the remote West Australian community of Kiwirrkurra on their way to the Northern Territory, ABC reports.

A ground search has so far been very difficult for police and emergency services due to flooded roads, with search parties from both the Northern Territory and Western Australia sides of the border getting bogged and aborting the search.

The Uluru-Kata Tjuta National Park was closed at 23:30 UTC on December 25 due to the risk of flooded roads and potential car accidents. Uluru is a large sandstone rock in the outback sacred to the indigenous Anangu people, and one of Australia's top tourist attractions.

"There's a lot of water … coming off the rock and what that does is just channels across the ring road around Uluru, some of those roads there were flooded by about 300 – 400 mm (11.8 to 15.7 inches) of rain. Quite spectacular but very hazardous road conditions," park manager Mike Misso told ABC.

Parks Australia said they had now reopened the park but urged people to drive carefully as there was still surface water on the roads.