Typhoon "Haima," also known as Lawin in the Philippines, made its second landfall, over China on October 21, 2016. Intense winds were already reported in Hong Kong, as hundreds of flights were canceled. Flash flooding, landslides, power outages and infrastructural damage are expected across the affected regions. The China Meteorological Department has issued a Red Warning for Typhoon in the south-eastern provinces of China, as of October 21. The Hong Kong Observatory issued a Tropical Cyclone Warning Signal 8 while the Central Weather Bureau of Taiwan issued a Torrential Rain Advisory and an Extremely Heavy Rain Advisory in the southern and eastern counties of Taiwan.

After leaving a trail of destruction and killing at least 13 people in the northern Philippines, Typhoon "Haima" made a second landfall in eastern Guangdong, China during the midday hours of October 21 (local time). The system hit the region as a Category 1 hurricane, bringing intense winds, heavy rainfall, and a strong storm surge.

The large eye of Typhoon #Haima has just made landfall in China. pic.twitter.com/kdz9DVxBG2

Typhoon "Haima" was located approximately 142.6 km/h (88.6 mph) northeast of Hong Kong and moving north-northwestward at 24 km/h (14.9 mph) on October 21, 09:00 UTC, according to the Joint Typhoon Warning Center (JTWC). The system was packing maximum sustained winds of 120.4 km/h (74.8 mph) with gusts up to 148.2 km/h (92 mph). The typhoon will rapidly erode as it interacts with the rugged terrain of eastern China, and is expected to dissipate over land over the next 24 hours. 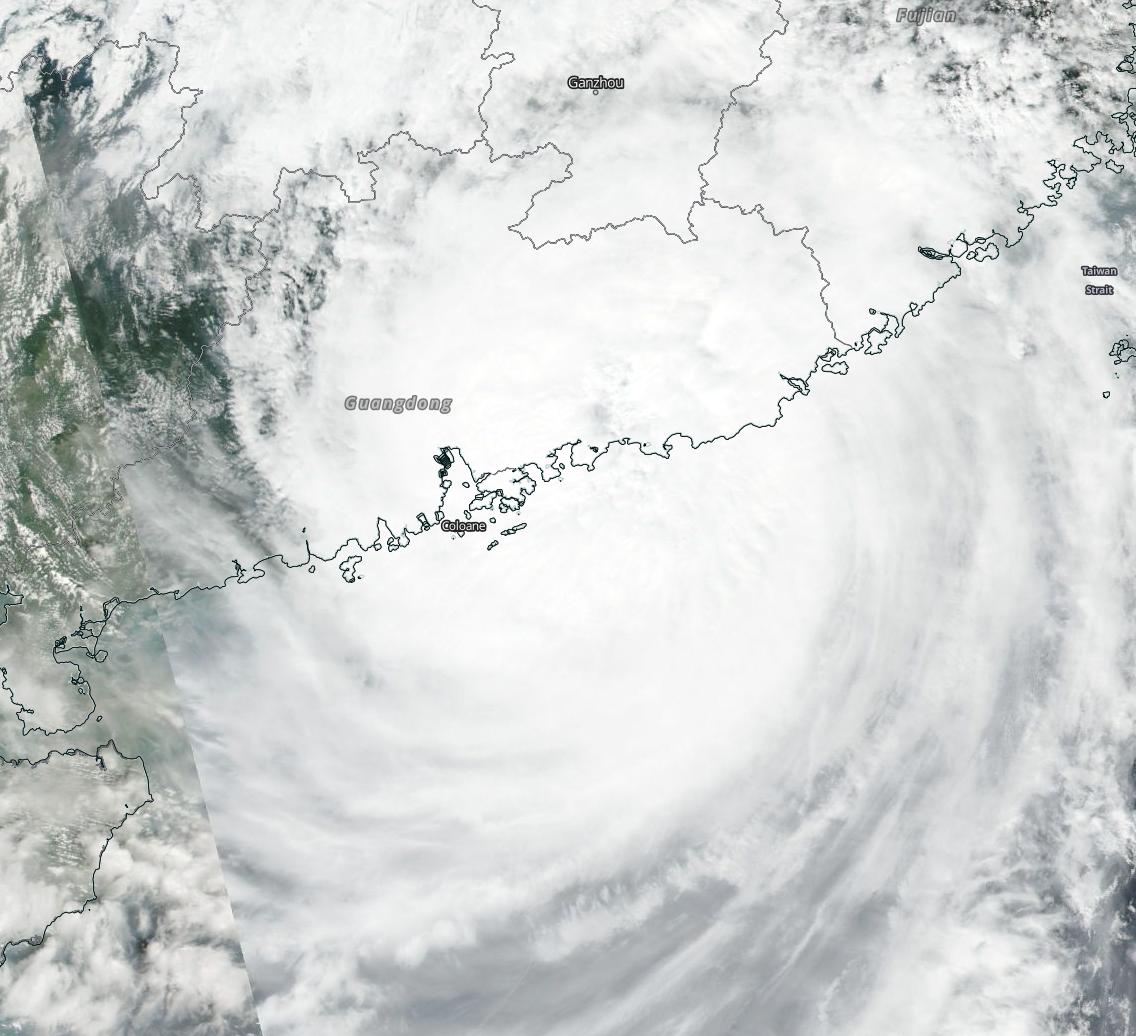 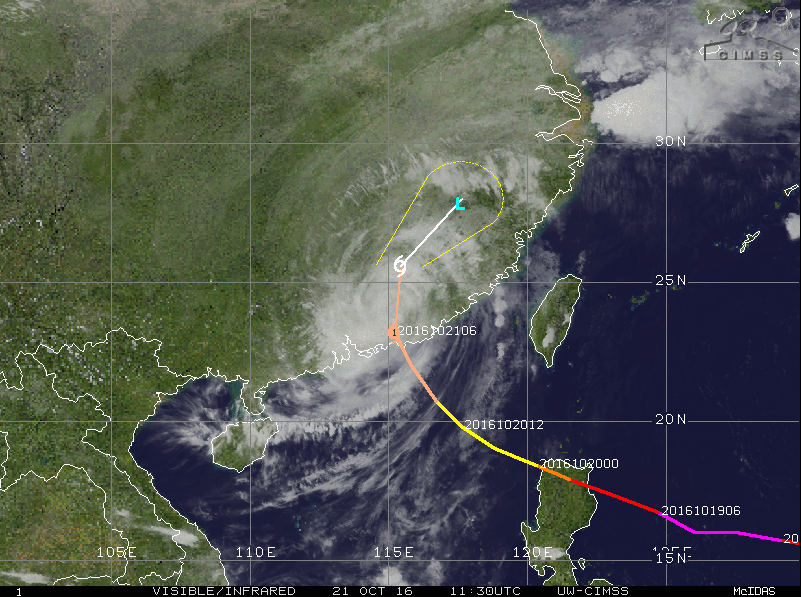 The coastline of southeastern Guangdong will face wind gusts of about 160 km/h (100 mph) during the afternoon of October 21, which will likely result in widespread power outages, downed trees, and infrastructural damage.

Between 125 and 250 mm (5 and 10 inches), locally more than 300 mm (12 inches) of rainfall, are expected in the eastern Guangdong. Life-threatening floods and landslides are expected, Some villages may also be left isolated, as roads and bridges could suffer severe damage. Coastal areas near and east of Haima's landfall will also experience flooding from the accompanying storm surge.

The west will be most affected by the typhoon, although high seas are expected to flood the southern Fujiana coast, as well. While Hong Kong will likely avoid the most destructive hit, between 50 and 100 mm (2 to 4 inches) of rainfall, and wind gusts around 65 km/h (40 mph) are still expected, according to Adam Fouty, an AccuWeather Meteorologist.

More incredible video of the flooding that halted traffic in Hong Kong due to #TyphoonHaima. Video: frannychung pic.twitter.com/2QMfb44Gu3

On the late morning of October 21 (local time), wind gusts of 65 km/h (40 mph) were already reported in Hong Kong. Financial markets were closed and hundreds of flights were canceled. Flash flooding, power outages and tree damage are expected, as heavy rainfall from the Typhoon "Sarika" have left the city vulnerable already.

As it continues to travel further inland, Haim will weaken, and become a tropical storm by the afternoon of October 22 over northern Jiangxi. The winds will still be strong enough to cause isolated power outages and tree damage northward to southern Jiangxi. Precipitation between 75 and 150 mm (3 and 6 inches) will spread from central Jiangxi to southern Jiangsu, northern Zhejiang and Shangai throughout the weekend. 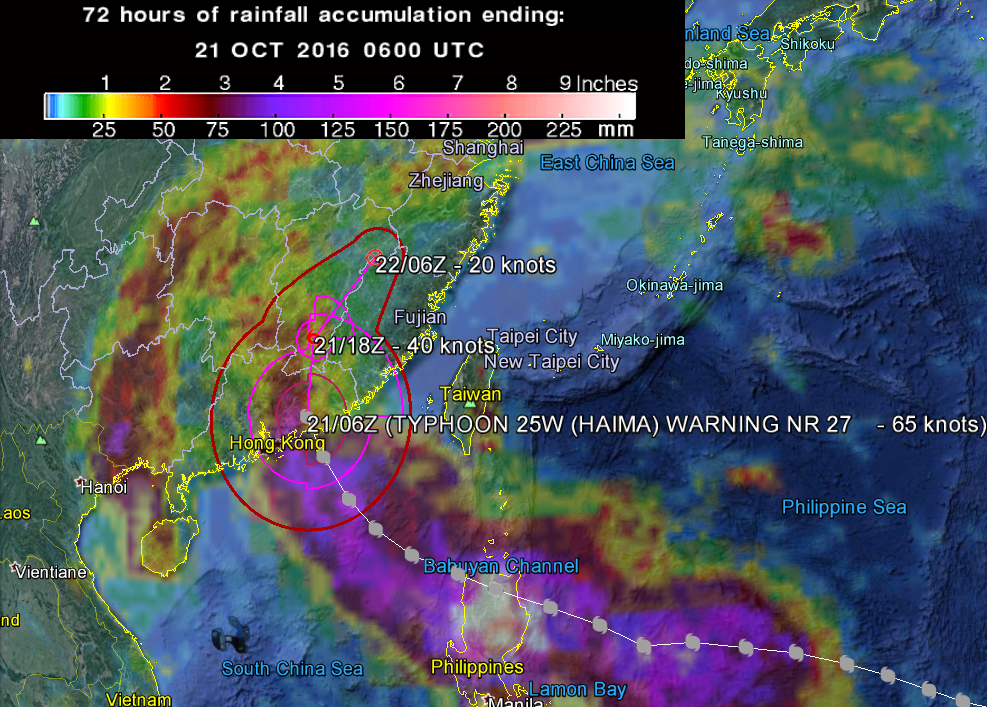 According to meteorologists from Westpacwx, moisture from Haima will affect Taiwan and Okinawa with showers and scattered thunderstorms on the afternoon of October 21 (local time).

The China Meteorological Department has issued a Red Warning for Typhoon in the south-eastern provinces of China, as of October 21. At the same time, the Hong Kong Observatory issued a Tropical Cyclone Warning Signal 8. The Central Weather Bureau of Taiwan issued a Torrential Rain Advisory and an Extremely Heavy Rain Advisory in the southern and eastern counties of Taiwan.