An international team of scientists has observed first clear signs that the hole in the Antarctic ozone layer is beginning to close. Led by Professor Susan Solomon of the Massachusetts Institute of Technology, the team found that the September ozone hole had shrunk by more than 4 million square kilometers since 2000 when ozone depletion was at its peak. The team also showed for the first time that this recovery has slowed somewhat at times, due to the effects of volcanic eruptions from year to year. Overall, however, the ozone hole appears to be on a healing path, MIT reports.

The researchers tracked the yearly opening of the Antarctic ozone hole in the month of September, from 2000 to 2015. They analyzed ozone measurements taken from weather balloons and satellites, as well as satellite measurements of sulfur dioxide emitted by volcanoes, which can also enhance ozone depletion. And, they tracked meteorological changes, such as temperature and wind, which can shift the ozone hole back and forth. 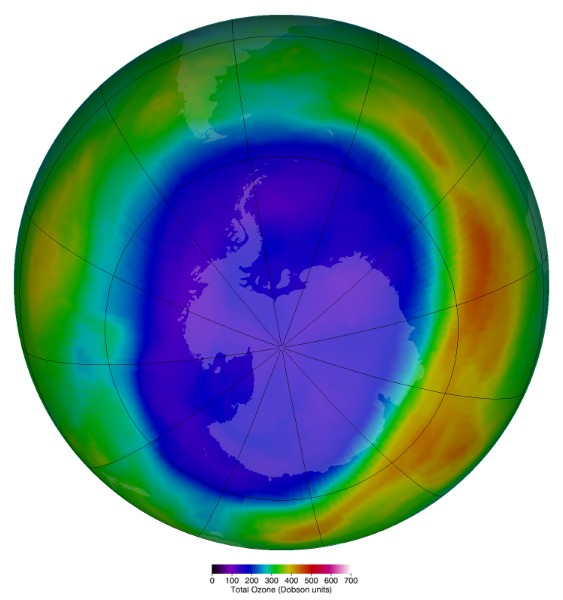 They then compared their yearly September ozone measurements with model simulations that predict ozone levels based on the amount of chlorine that scientists have estimated to be present in the atmosphere from year to year.

What they found is that the ozone hole has declined compared to its peak size in 2000, shrinking by more than 4 million square kilometers by 2015. They further found that this decline matched the model’s predictions and that more than half the shrinkage was due solely to the reduction in atmospheric chlorine.

The team did observe an important outlier in the trend: In 2015, the ozone hole reached a record size, despite the fact that atmospheric chlorine continued to drop. In response, scientists had questioned whether any healing could be determined. Going through the data, however, Solomon and her colleagues realized that the 2015 spike in ozone depletion was due primarily to the eruption of the Chilean volcano Calbuco.

Volcanoes don’t inject significant chlorine into the stratosphere, but they do increase small particles, which increase the amount of polar stratospheric clouds with which the human-made chlorine reacts.

The authors of the study, published June 30, 2016, in the journal Science, used “fingerprints” of the ozone changes with season and altitude to attribute the ozone’s recovery to the continuing decline of atmospheric chlorine originating from chlorofluorocarbons (CFCs).

“We can now be confident that the things we’ve done have put the planet on a path to healing,” says lead author Susan Solomon, the Ellen Swallow Richards Professor of Atmospheric Chemistry and Climate Science at MIT. “Which is pretty good for us, isn’t it? Aren’t we amazing humans, that we did something that created a situation that we decided collectively, as a world, ‘Let’s get rid of these molecules’? We got rid of them, and now we’re seeing the planet respond.”

“Why I like this paper so much is, nature threw us a curveball in 2015,” says Ross Salawitch, professor of chemistry and biochemistry at the University of Maryland. “People thought we set a record for the depth of the ozone hole in October 2015. The Solomon paper explains it was due to a specific volcanic eruption. So without this paper, if all we had was the data, we would be scratching our heads — what was going on in 2015?”

The ozone hole begins growing each year when the Sun returns to the South Polar cap from August and reaches its peak in October – which has traditionally been the main focus for research.