The eruption began after about 2 hours of major seismic activity. OVDAS said they recorded a swarm of volcano tectonic earthquakes, activity associated with rupture of rock in the earth's crust caused by magmatic flow. The first major event was M2.5, located 3.3 km west of the crater, at a depth of 7.4 km. 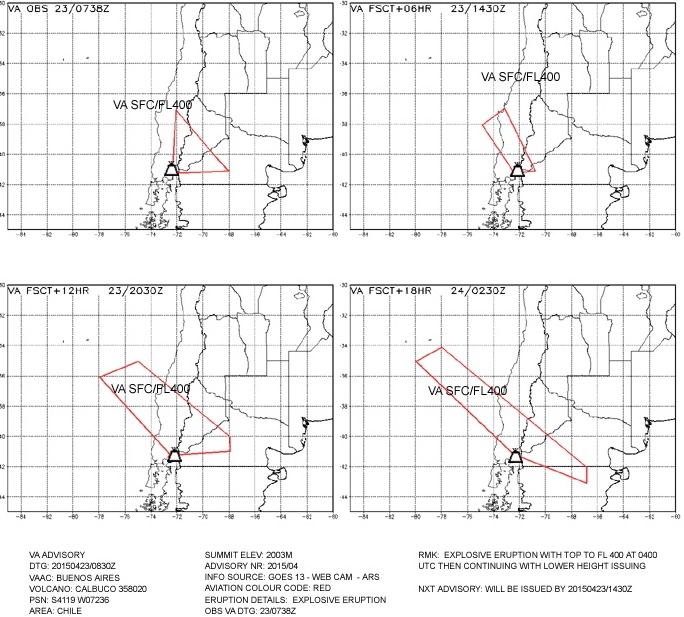 A 20 kilometer exclusion zone was established around the volcano. Over 4 000 people within this exclusion zone were evacuated during a heavy ashfall. The towns of Ensenada, Correntoso and Lago Chapo are completely evacuated.

#Calbuco volcano-CHILE Rays are product of the friction between the particles within the cloud of ashes @chematierra pic.twitter.com/IY9oLcF9PG

Interior and Security Minister Rodrigo Penailillo said this was clearly a much larger eruption than the one we saw with the Villarica some weeks ago and therefore we need to take bigger and faster measures.

He added that the government was sending water in case resources get contaminated by ash and that police and military officers had been deployed to ensure safety and help with evacuations.

Along with its neighbor Osorno, Calbuco is one of the most active volcanoes of the southern Chilean Andes. The isolated late-Pleistocene to Holocene andesitic volcano rises to 2003 m south of Lake Llanquihué in the Chilean lake district. Guanahuca, Guenauca, Huanauca, and Huanaque, all listed as synonyms of Calbuco (Catalog of Active Volcanoes of the World), are actually synonyms of nearby Osorno volcano (Moreno 1985, pers. comm.).

The 2003-m-high Calbuco is elongated in a SW-NE direction and is capped by a 400-500 m wide summit crater. The complex evolution of Calbuco included edifice collapse of an intermediate edifice during the late Pleistocene that produced a 3 cu km debris avalanche that reached the lake. Calbuco has erupted frequently during the Holocene, and one of the largest historical eruptions in southern Chile took place from Calbuco in 1893-1894 and concluded with lava dome emplacement. Subsequent eruptions have enlarged the lava-dome complex in the summit crater.