According to a new study published in MDPI's open access journal Remote Sensing, the maximum subsidence in parts of China's Bejing is greater than 100 mm (4 inches) per year.

Beijing is one of the most water-stressed cities in the world. Due to over-exploitation of groundwater, the Beijing region has been suffering from land subsidence since 1935, study authors write.

Researchers have employed the Small Baseline InSAR technique to process Envisat ASAR images acquired between 2003 and 2010 and TerraSAR-X stripmap images collected from 2010 to 2011 to investigate land subsidence in the Beijing region.

They found that the maximum subsidence is seen in the eastern part of Beijing with a rate greater than 100 mm/year.

Furthermore, a relationship with the distances to pumping wells was also recognized in this work. 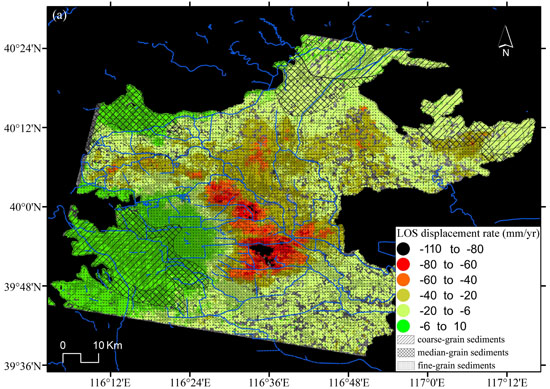 Located at the northern end of the North China Plain, Beijing is ranked as the 5th most water-stressed city in the world, and groundwater is the main water source for industrial, agricultural and household activities.

With its rapid urban growth, the city has been increasing water demand. Previous studies reveal that the Beijing region has been suffering from land subsidence due to over-exploitation of groundwater since 1935, and more seriously, the rate and extent of land subsidence shows an increasing trend. Land subsidence is a severe geohazard threating the safety of the public and urban infrastructure.

The main subsidence bowls are distributed over the Chaoyang, Changping, Shunyi and Tongzhou Districts. The subsidence bowls located in the east, north-east and north parts of Beijing have been gradually connected, indicating the serious situation in these areas. Consequently, the bowl, which appeared for the first time in 1975, has gradually increased in depth and extension until the present.

The over-exploitation of groundwater in the study region has caused a regional drop of piezometric levels, decreasing pore pressure and increasing effective stresses according to Terzaghi’s theory. Consequently, when groundwater is pumped from the aquifer system, both the aquifers and the aquitards that constitute the aquifer system undergo deformation, but to different degrees, as most of the permanent subsidence occurs due to the irreversible compression or consolidation of aquitards.

When land subsidence data are used in conjunction with good well logs and water-level data from adjacent observation wells, the deformation history can provide the basis for stress-strain analysis and inverse modeling that defines the average compressibility and vertical hydraulic conductivity of the aquitards.

It is worth noting that the displacements measured by InSAR on the ground surface are the addition of the deformations occurred in the different aquitard and aquifer layers underlying the ground surface and, thus, the stress-strain curves shown in Figure 9 correspond to the whole aquifer system. The analysis of the different stress-strain relationship clearly indicate that the aquifer system presents different behaviour.

The results reveal that the Beijing region has experienced significant ground subsidence from 2003 to 2010 with a maximum accumulative displacement of 790 mm (31.1 inches).

The analysis of different stress-strain relationships shows that the aquifer-system exhibits different behaviour, such as quite elastic behaviour and predominantly inelastic behaviour. Additionally, the analysis of the variation of the inelastic storage coefficient (Skv) of the aquifer system computed from the stress-strain curves shows that the deformability of the aquifer system increases from the north towards the south. The distribution and development trends of the land subsidence in the study area are obviously controlled by its geological structures. Among the biggest contributors to land subsidence are the clayey layers.

The subsidence bowls located in the east, north-east and north are mostly placed over a zone with a clayey layer underneath, with a thickness around 50 to 70 m (164 – 229 feet), and those subsidence bowls are located over predominantly fine-grain sediments. The InSAR data statistics and the distance to the pumping wells show that land subsidence rates are higher near the pumping wells, as expected according to the shape of a well’s cone of depression. To summarize, accurate InSAR-derived data from two different sensors have allowed us to perform a comprehensive spatial and temporal study of the land subsidence in Beijing basin from 2003 to 2011.

Complementarily, these data and existing geo-information have been used to perform a study of the role of the main conditioning and triggering factors controlling land subsidence mechanisms in this area, providing useful information for improved development of future models for the prediction of land subsidence affecting this area.