Heavy monsoon rains have triggered deadly floods and landslides in the Indian state of Uttarakhand, neighboring Nepal, on July 1, 2016. According to media reports, 18 bodies have been found so far. The number of casualties is expected to rise.

The Press Trust of India news agency said 100 millimeters (4 inches) of rain fell in some areas in two hours today, causing swollen rivers to burst their banks and forcing residents to flee their homes.

The worst-affected villages were in the remote mountainous districts of Pithoragarh and Chamoli.

A cloudburst hit Singhali area near Pithoragarh early today morning, flattening homes in over seven villages and leaving many residents trapped in the debris. 18 bodies have been recovered so far, India Today reports.

The Press Trust of India news agency quoted officials as saying at least 25 people were missing in seven villages in Pithoragarh, about 510 kilometers (320 miles) north-east of New Delhi. Flood waters and mudslides have blocked roads at more than a dozen places, delaying the movement of rescue teams in the area.

"We have recovered five bodies from Singhali area while three bodies have been recovered from Thal village. The search for others is on by rescue parties consisting of army and paramilitary personnel," Pithoragarh District Magistrate H C Semwal said. Meanwhile, another cloudburst in Chamoli washed away houses in Gopeshwar on the banks of river Mandakini. Nine people have been reported dead in Chamoli district.

Many people were trapped under toppled houses and debris unleashed by the landslides, according to the state's top elected official, Chief Minister Harish Rawat. "We are getting reports of 18 to 20 people killed, and this figure may go higher," Mr. Rawat said. 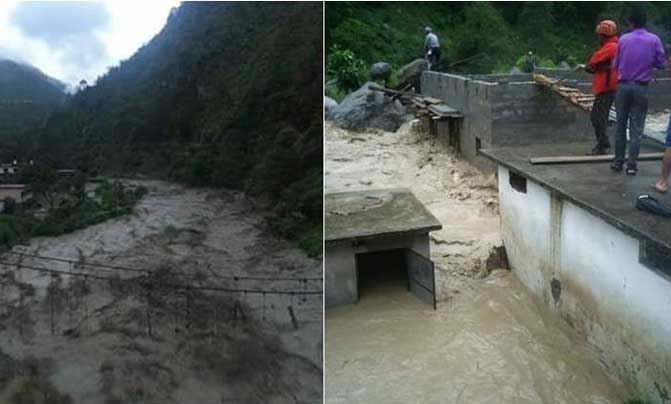 Officials said the toll from the disaster in the scenic Himalayan state could rise, with many believed buried in the mud and debris that barreled down slopes into homes.

Further “heavy to very heavy” rain is in the forecast for the next 3 days at least, with the worst expected on Saturday, July 2, India Meteorological Department (IMD) said.