According to government officials, a large landslide triggered by more than three days of heavy rain buried three villages in Aranayaka (Siripura, Pallebage and Elagipitya), district of Kegalle, Sri Lanka on May 17, 2016. As of late May 17, the death toll is still unknown. Red Cross Sri Lanka reports over 200 families are missing.

"There were about 150 families in those villages, and we don't know how many survived," said Rohan Dias, a deputy police inspector.

"There are about 800 people gathered in the nearby temples including the people from the neighboring villages fearing their villages could also be affected. There are another 400 people on the roads who have come to see their relatives," Dias told Reuters.

"I saw a whole rock came down and buried many houses. There are people inside," one woman told a local private channel.

"This is the worst torrential rain we have seen since 2010," said Pradeep Kodippili, a spokesman for the disaster management center. Nineteen of Sri Lanka's 25 districts have been hit.

Torrential downpours that have been lashing Sri Lanka since May 15, 2016, triggered floods and numerous landslides across the country and claimed 12 lives (Aranayaka landslide victims not counted).

More than 135 000 people have been evacuated from their homes.

Landslide warnings have been put in effect for eight districts. 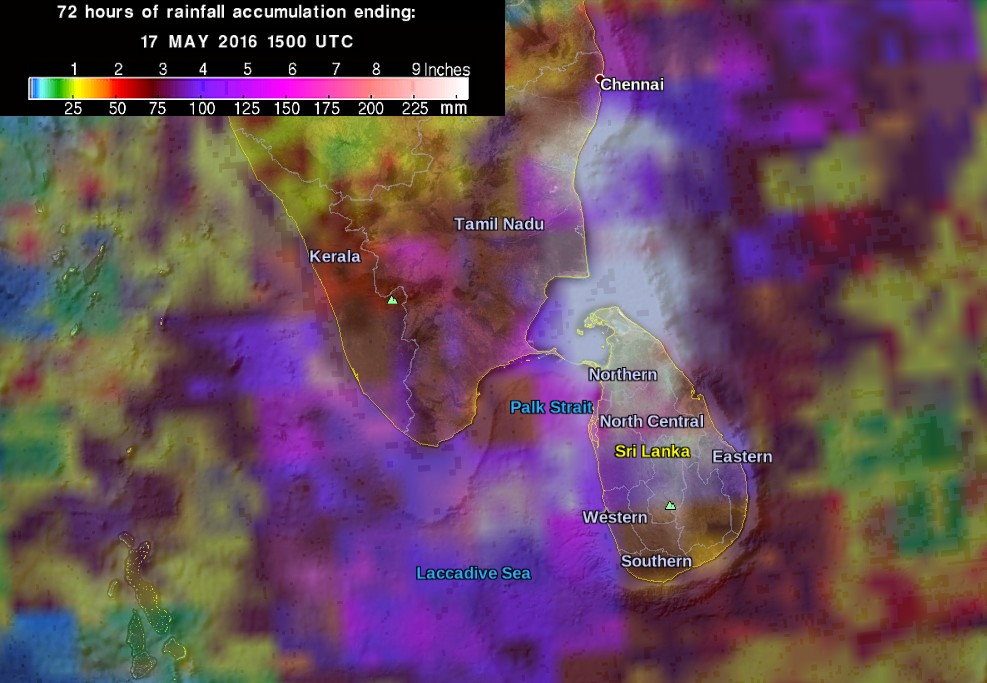 Sri Lanka's Department of Meteorology said today the situation I likely to improve over the next 24 hours, although some further rainfall is expected.

Sri Lankan Red Cross said early UTC Wednesday, May 18, that 13 bodies have been recovered and the death toll is expected to rise. Search and rescue efforts are underway.

The three affected villages are about 72 km (45 miles) from the capital, Colombo.

ALERT – Search & rescue efforts are underway in search for missing from the #Aranayake #Landslide in #LKA pic.twitter.com/Z3Kdp2Y0kL

ALERT – Grim situ of the devastation coming to light in #Aranayake as rescue workers cont. to search 4 ppl.#lka pic.twitter.com/kuLTkDZTQH

Approximately 144 mm (5.6 inches) of rain in 24 h were recorded in Puttalam (North Western province) over May 17 – 18 and 212 mm (8.34 inches) in Mahailluppallama (North Central province) over May 16 – 17. Over the next 24 h heavy rain and strong winds are expected to continue and will also affect the south-western areas of the country.

As of early UTC of May 18, national authorities report over 346 000 people affected, 19 dead, 23 injured, six missing, over 196 000 evacuated and over 2 600 buildings partially or fully damaged throughout the country.