Torrential downpours that have been lashing Sri Lanka since May 15, 2016 (local time), triggered floods and landslides across the affected areas and claimed 8 lives, so far. Tens of thousands of people were forced to evacuate their homes, and landslide warnings have been put in effect for eight districts. Severe weather conditions are expected to ease, but strong winds could persist across the country for another couple of days.

The Meteorology Department warned the approaching atmospheric disturbance would develop into a depression, and bring thunderstorms accompanied by strong winds and heavy rainfall across Sri Lanka on May 15. Rainfall amounts up to 145 mm (5.7 inches) were reported in some areas. 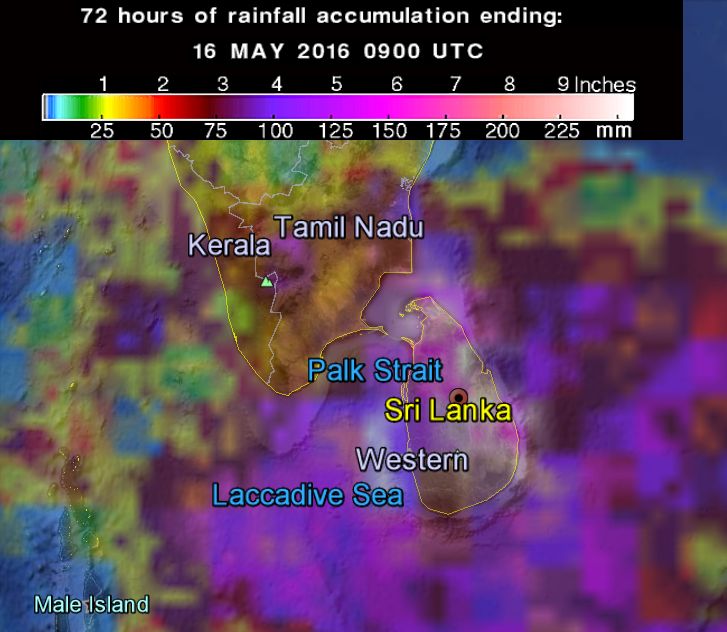 According to Pradeep Kodippili, Assistant Director of the Disaster Management Center, over 11 000 people across the country have been affected by the severe weather conditions. Evacuation centers have been set up across the affected areas, where relief and assistance are being provided.

Weather conditions have severely disrupted traffic, as several roads were flooded and closed due to landslides and landslide threats. According to the power and energy ministry, the power supplies were also interrupted. Damage reported so far also includes downed trees and damaged power cables. Three international flights have been diverted to India, according to the airport authorities.

To aid people living on slopes or in flooded areas, military and navy personnel has also been deployed. Almost 5 000 families, residing in the low areas have been forced to evacuate.

Head of the Landslide Research and Risk Management Division of the National Building Research Organisation, R.M.S. Bandara said that the warnings have been issued to the Kandy, Ratnapura, Kurunegala, Kegalle, Monaragala, Badulla and Nuwara Eliya Districts.

According to R.M.S. Bandara, Head of the Landslide Research and Risk Management Division of the National Building Research Organisation, landslide warnings have been issued for districts of Kandy, Ratnapura, Kurunegala, Kegalle, Monaragala, Badulla and Nuwara Eliya on May 15.

"The low pressure area is moving away from Sri Lanka so the rainy conditions over the island will be reduced to some extent, but strong wind conditions will continue for a few more days," said Malinda Millagoda, a local meteorologist.