Record low temperatures accompanied with snowfall were reported across portions of Midwest and Northeast, US, since May 14, 2016. According to the National Weather Service (NWS), below average temperatures will linger in the area until the middle of the week,  when warmer, more seasonable conditions will begin to take place. Severe thunderstorms are expected across parts of the Plains throughout May 16, and heavy rainfalls and flash floods could affect the local areas of Southern and Central Plains on May 17.

Parts of Wisconsin, Michigan, northeast Ohio, northern and western Pennsylvania and northern New York experienced snowfall throughout the period between May 14 and 15. In Marquette, 2.8 cm (1.1 inches) fell on May 14. Some areas in northern New England, Upstate New York, and Syracuse were still covered in snow, as of May 16.

NWS has forecasted strong to severe thunderstorms over parts of central and southern High Plains, and heavy rainfall from the central Plains into the mid-Mississippi Valley and portions of the Western Gulf Coast on May 16, with temperatures about 10 to 20 °F below average in the region from the Central Appalachians westward to the Central Rockies.

Throughout the day, a surface cold front is expected to slowly move through the Four Corners, across the Southern Rockies, and southern and central Plains by the middle of the week. Showers and thunderstorms will take place from the Pacific Northwest to the southern Plains and western Gulf Coast, and mountain snow is possible in the Northern and Central Rockies and the highest elevations of the Wasatch. 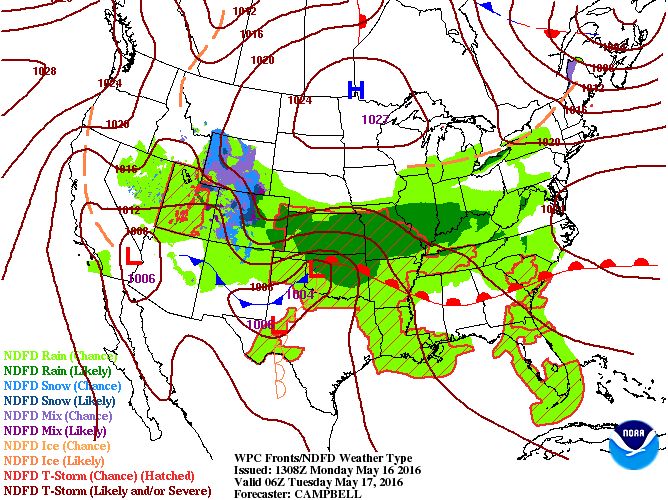 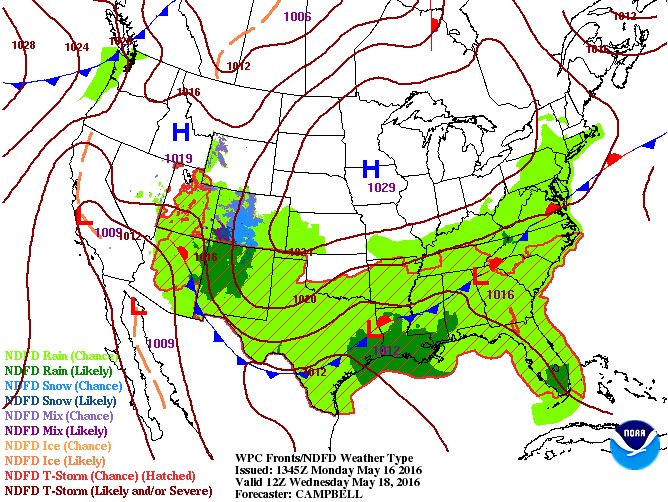 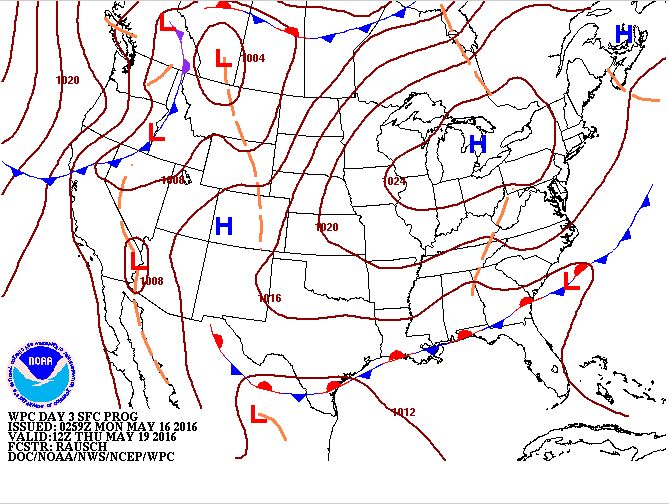 At the end of the day and into the early morning of May 17 (local time), the precipitation is expected to move eastward into the Midwest and the valleys of Ohio and Tennesse while showers and thunderstorms will likely develop over some areas in the Southeast. Some storms across the southern and central Plains may reach strong or severe intensity, and the Storm Prediction Center issued a slight risk for the Texas and Oklahoma on May 16, and an area of enhanced risk over the Panhandles.

The region of enhanced risk will move southward on May 17, across a large area of Texas, western Arkansas, and Louisiana. The southern and central Plains may also experience heavy rainfall and flash flooding, and excessive rainfall outlooks are in place for the western Gulf Coast and Central Plains/Middle Mississippi Valley.

Rainfalls are expected to ease across the Northeast by May 17, as the upper-level low travels into Eastern Canada. The Middle Missouri Valley and parts of the Lower Great Lake will likely experience showers and thunderstorms by the morning of May 17.

Cold conditions will linger in the Midwest and Northeast by the middle of the week when temperatures will start to climb back to near-average levels.