Earthquake rates reached as many as 20 earthquakes per hour, peaking between 06:00 – 07:00 local time on May 16 before decreasing later in the day. The Pacific Northwest Seismic Network (PNSN) located nearly 60 earthquakes. However, many more events occurred but were too small to be located.

"This swarm is very typical for Mount Hood because it is located several miles away from the summit vent – it is rare to see swarms occur directly beneath the summit," the Cascades Volcano Observatory said on May 16. 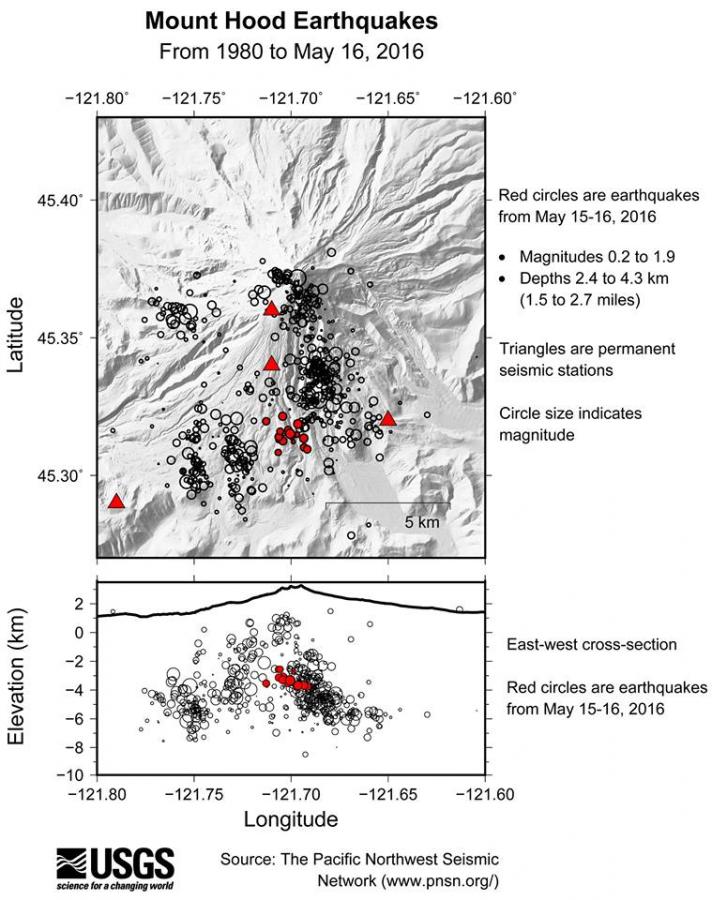 (Upper) Map view of earthquakes (circles) near Mount Hood between 1980 and May 16, 2016 from the Pacific Northwest Seismic Network. Earthquakes are sized based on their magnitude. Only earthquakes with 6 or more phase picks, a gap between seismic station observations of less than 150 degrees and a station within 5 km of the epicenter. Red triangles are permanent seismic stations as of 2016. (Lower) East-West cross-section view of earthquakes plotted in map view. Credit: USGS/CVO

Studies of past swarms have concluded that they likely are occurring on pre-existing regional faults and are best thought of as "tectonic" earthquakes rather than earthquakes directly linked to magmatic processes.

Swarms are not uncommon in the Mount Hood area, which typically experiences one or two swarms per year that last for several days to weeks.

The most energetic swarm recorded to-date occurred in June-July of 2002, which included a magnitude 4.5 that was broadly felt in the Government Camp area.

The current swarm is much, much smaller than the 2002 swarm, both in terms of earthquake size and in number. A paper published in 2005 by J. Jones and S.D. Malone studied Mount Hood swarms in great detail; read more in a PNSN 2012 blog.

The last known eruption of this volcano took place in 1866.

Mount Hood, Oregon's highest peak, forms a prominent backdrop to the state's largest city, Portland. The eroded summit area of Mount Hood consists of several andesitic or dacitic lava domes. Major Pleistocene edifice collapse produced a debris avalanche and lahar that traveled north down the Hood River valley and crossed the Columbia River. The glacially eroded volcano has had at least three major eruptive periods during the past 15,000 years.

The last two occurred within the past 1800 years from the central vent high on the SW flank and produced deposits that were distributed primarily to the south and west along the Sandy and Zigzag rivers. The last major eruptive period took place beginning in 1781, when growth of the Crater Rock lava dome was accompanied by pyroclastic flows and lahars down the White and Sandy rivers. The Sandy River lahar deposits extended to the west as far as the Columbia River and were observed by members of the 1804-1805 Lewis and Clark expedition shortly after their emplacement. Minor 19th-century eruptions were witnessed from Portland. (GVP)