This asteroid is approximately 440 – 990 meters in diameter and is traveling at a relative velocity of 10.16 km/s (6.31 m/s). Its next encounter with Earth will be on March 21, 2033 when it is estimated to flyby our planet at a distance of approximately 3.3 million km (2 million miles).

2014 YB35 is a Near-Earth object (NEO) classified as Potentially Hazardous Asteroid (PHA), however, this does not mean it will impact the Earth. It only means there is a possibility for such a threat. 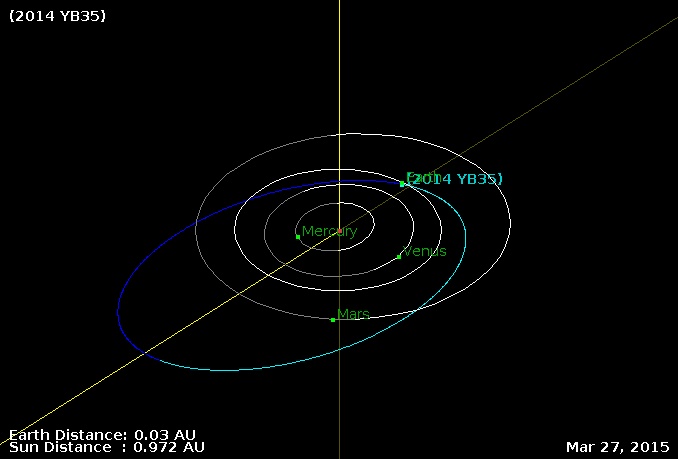 While it is important to understand that comets and asteroids present real danger to our planet, some media is exaggerating the significance of Friday's event with titles such as "NASA on alert as HUGE Asteroid 2014-YB35…" and words like "terrifyingly close". Neither is correct. NASA is definitely not on alert because of this asteroid, and 4.45 million km is not terrifyingly close at all.

Every day, our planet is bombarded with more than 100 tons of dust and sand-size particles. Many of the incoming particles are so small that they are destroyed in the Earth's atmosphere before they reach the ground and these particles are often seen as meteors or shooting stars, NASA explains.

With an average interval of about 10 000 years, rocky or iron asteroids larger than about 100 meters would be expected to reach the Earth's surface and cause local disasters or produce the tidal waves that can inundate low lying coastal areas.

On an average of every several hundred thousand years or so, asteroids larger than 1.5 km (1 mile) could cause global disasters. In this case, the impact debris would spread throughout the Earth's atmosphere so that plant life would suffer from acid rain, partial blocking of sunlight, and from the firestorms resulting from heated impact debris raining back down upon the Earth's surface.

1565 of these NEOs have been classified as PHAs.